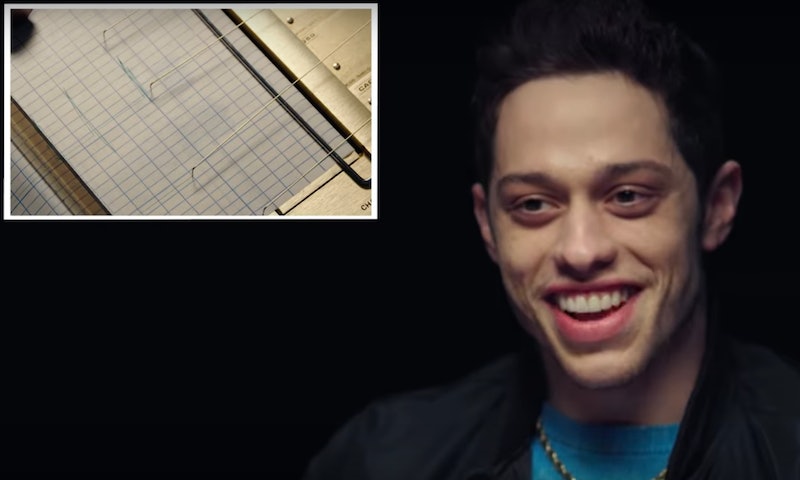 Well, it happened. The unofficial king has relegated his crown. Sooner or later, this day was bound to come. While taking a lie detector test in a video for Vanity Fair, Pete Davidson admitted that two stars have more BDE than him, and you know what? Yeah, that checks out.

Davidson and his good friend, Colson Baker (aka Machine Gun Kelly), both sat down recently to ask each other a series of questions. The catch was that the answers to their questions would be checked in real time via a lie detector administrator, and the results did not disappoint.

Baker sat down to take the test first, and things got real straight out the gate. When asked if he thought Davidson could be a good rapper, Baker replied in the negative. "Is that true?" his buddy asked, laughing. It was. "I don't think so either," Davidson admitted.

After a series of questions about Davidson's comedic chops — no, Baker hasn't fake laughed at any of his jokes; no, Davidson isn't the funniest cast member of Saturday Night Live (they both eventually agreed Keenan Thompson is) — it was time to address the BDE in the room. "Do you know what the term BDE means?" Davidson inquired. Baker did. "Do I have BDE?" the SNL star asked. "I evidently created this sh*t," he added.

"Do you think I have more BDE than this guy?" Davidson continued, placing a photo of George Clooney on the table. "Hell nah," Baker confessed without hesitation, "That dude rocks." Davidson agreed, and reckoned, "That dude's too cool." An accurate assessment all around.

"What about this woman? Does she have more BDE than me?" Davidson went on, this time flashing a photo of Rihanna. "Hell yeah, absolutely" the SNL star himself said. Baker too, agreed. Without a doubt.

So, in case you feel like you're missing something thus far, here's a quick refresher on the term "BDE," aka Big Dick Energy. Back when Davidson was dating Ariana Grande last summer, the pop star made an *interesting* comment in regards to his size.

Twitter went wild, and the term "BDE" was born. It's now essentially used to describe someone who exudes confidence in an unassuming way. "People who have big dicks, you see, are super confident," Refinery29 explained about the subject. "But they're quiet about it, because they don't need to show off. Their dick has them covered."

Since becoming the unofficial king of BDE, Davidson has addressed the term on more than one occasion. At first, he told Variety during an interview last September, "I don’t hate it. I’m just really, really happy, and if that means I have big dick energy, then sick."

After Davidson and Grande broke up, though, he kind of changed his tune. While performing stand-up at Tarrytown Music Hall earlier this year, Davidson reportedly told the crowd (as per People), "I don’t like that she talked all that sh*t for my penis. Everything is huge to her," he joked. "Why would she tell everyone that I have a huge penis? So that every girl who sees my dick for the rest of my life is disappointed."

Now, it seems as if Davidson would prefer to pass the BDE crown to more deserving celebs, like Clooney and Rihanna. Will they accept the throne? BD — er, TBD.