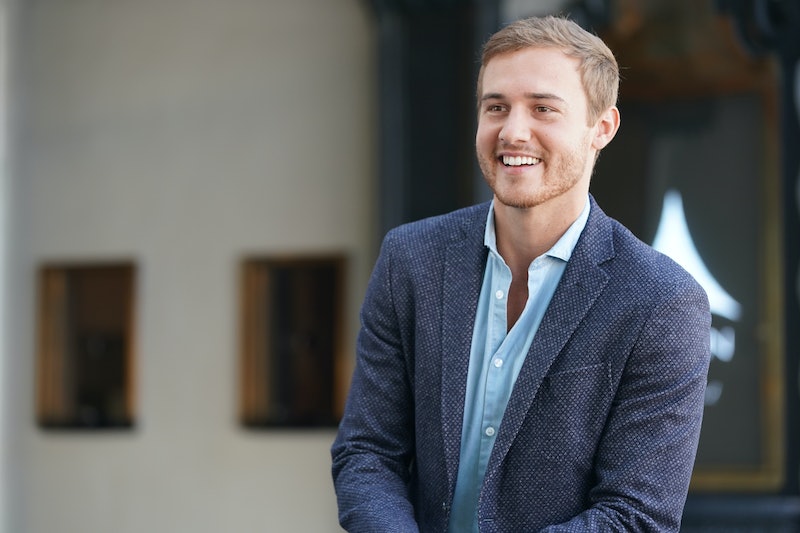 After he and his new love leave the Bachelor Mansion, Pilot Pete might be heading back to his parents' house — but his mother wants the women competing for his affections to know that isn't a bad thing. During a recent appearance on the Bachelor Party Podcast, Peter Weber's mother explained why he still lives at home, and told hosts Rachel Linsday and Becca Kufrin that it is actually a smart decision on the Bachelor's part. When asked about why her son still lives with his parents, Barbara and Peter Sr., Barbara explained that there were two factors at play: their culture and Peter's jet-setting lifestyle.

"First of all, we are a very, very close family. Very close...we're basically one. We support each other in every which way, and we're each other's best friends, not just parents," Barbara said, before adding that it's normal in the Cuban culture for children to live at home until they get married. "In old time Cuba, the kids would be at home," she said, adding that in her family, the households "would have children, and the grandparents ... it was one big happy family."

While she noted that she and Peter Sr. aren't in any rush for Peter and his brother, Jack, to move out, Barbara also explained that being "Pilot Pete" means that the current Bachelor isn't at home enough to justify having a house of his own. "[Peter] works four days a week. Then he has four days off, and he goes with his friends away, like they take a little mini vacation wherever. And then he comes back, and he goes right back to work," she explained.

"So is that really smart to be paying a lot of money, monthly, until you can buy a house?" Barbara continued, adding that she and her husband have always advised Peter to be smart with his money. "He can buy a house tomorrow if he wanted it. Responsibly, he can do it, but I'm just looking for the right place for him when we do decide that he's going to take that step."

Being so close with his family — both emotionally and physically — means that the After the Final Rose special wasn't the first time that Peter's parents caught wind of his sex life. "I've brought girls home, and it's not weird," the 28-year-old pilot recently told Entertainment Tonight. "The next morning, I'll wake up and the girl is making breakfast with my mom, and they're chatting it up. I know it's not normal."

However, whoever wins Peter's heart on The Bachelor doesn't have to worry about moving into his family home, as Peter also confirmed that he plans to get a place of his own if he does get engaged at the end of his journey on the show. "I will set the record straight: that's not happening," he told ET with a laugh. "I have plans to spread my wings."

Even after he leaves his family home, though, Peter's parents will continue to play a major role in his life, as the pilot even referenced their long-term love story as his inspiration ahead of his Bachelor tenure. "I have truly, my entire life, looked forward to find my girl, that person that I can't wait to spend the rest of my life with," he told Chris Harrison after he was announced as the new Bachelor in September. "I've had the most amazing example [of love] with my parents growing up, and I feel like the luckiest kid ever. I saw so much love in my household, and 30-some-odd years later, they are still in love with each other. I want that for myself."

Bachelor Nation will have to tune in to the season premiere of The Bachelor on January 6 to find out if Peter does, indeed, find a love like his parents — and an excuse to move out on his own.