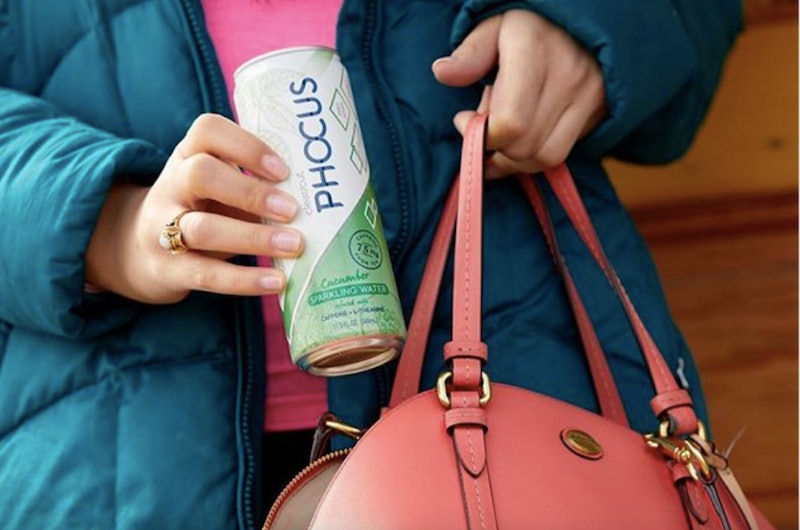 Picture this: it's Get Your Butt To Work O'Clock on Monday morning. You're sitting at your desk, your heart and your bladder torn. Do you want the sweet fizz of a vaguely fruit-flavored LaCroix on your tongue, or the rush of that post-coffee high in your fingertips? It turns out we no longer live in a world where we have to decide between the two, because caffeinated sparkling water is a thing that exists.

Defending my fellow millennials is a hill I will gladly die on (well, tweet from, at least), but this, my friends, is squarely our fault and nobody else's. The drink in question, called Phocus, comes in five different flavors: Natural, Blood Orange, Grapefruit, Cucumber, and Yuzu Lime. (Yes, they are pastel-colored and Instagrammable; we can all sigh a collective breath of relief.) Each can of this carbonated drink, like LaCroix, doesn't have any sweeteners or preservatives, but it does have the equivalent caffeine content of a cup of coffee (about 75mg, for anyone who is responsible enough to keep count). And for anyone with food allergies or dietary preferences, it is conveniently vegan and gluten-free.

But, perhaps most importantly, the cans are super, duper cute.

So how exactly can a drink that is decidedly not coffee have that much caffeine in it? The caffeine is extracted from green tea leaves, and designed to prevent you from the almighty Caffeine Crash. As a spokesperson for the drink explains, it's "[s]pecially formulated with a natural amino acid for the slow and steady release of energy, avoiding 'caffeine jitters'."

And for those among us who are in the ~party mood~ more than work mode, evidently it doesn't not pair well with certain alcohols, according to Phocus's Instagram page. Could this be the next cold brew wine?

Right now the drink is available on Amazon Prime for $19.99 in packs of 12 that include four Natural, two Blood Orange, two Grapefruit, two Cucumber, and two Yuzu Lime, as well as in 12-packs of specific flavors.

But this is, of course, far from the only way to follow your caffeinated millennial bliss. As mentioned earlier, Apothic just debuted a cold brew wine called Apothic Brew — that being said, it actually contains a minimal amount of caffeine (less than a cup of decaf coffee), so it's mostly for the flavor and not for the "!!!" that a good caffeine buzz brings.

But while we're on the subject of delicious caffeine hybrids, it would be remiss not to mention that caffeinated chocolate exists as well. Awake sells them in several different flavors, in fact, both in candy bar form and in miniature. As someone who loves chocolate a lot and reacts to caffeine the way a five-year-old would, I personally figured out that these were no joke the hard way, but if you are a responsible caffeine consumer who can stop yourself from gobbling a bunch of chocolate in one sitting, then I highly recommend it.

Of course, for the especially lazy out there, you can always invest in chewable coffee; sure, it will make your local barista weep at what has become of their art form, but it will save you the exhausting process of lifting your mug to your mouth 10-20 times to consume a beverage, and then getting up an hour later to pee it all out.

In the meantime, we can all rejoice — now that we no longer have to choose between caffeine and LaCroix, we can use all of that extra time we were spiraling into existential crises to do important things, like dream up more ideas for weird stuff we can stick caffeine in. Dare to dream, y'all.