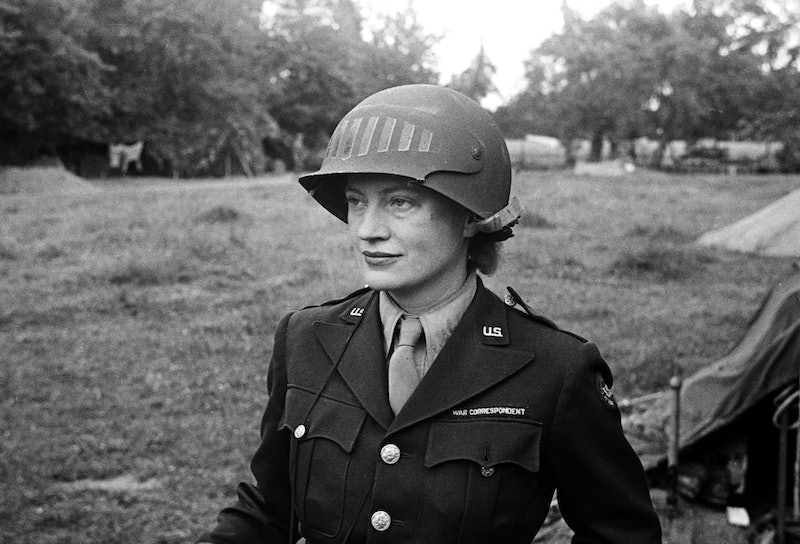 “They are too far and few between,” says Pulitzer Prize-winning photojournalist Lynsey Addario, clearly exasperated, via Zoom. We’re discussing the dearth of films and documentaries that accurately depict the experience of female war correspondents and photojournalists. That isn’t to say they don’t exist, of course they do. But more often than not, Addario points out, they tend to romanticise what is a very harsh, very difficult reality. “Why are we perpetuating that shallow portrayal?”

The MacArthur “genius grant” Fellowship recipient features as one of the talking heads in the BBC’s latest documentary, Lee Miller - A Life On The Frontline, airing tonight (May 2) on BBC Two. Following the life story of the acclaimed war photographer, it could have easily fallen into that rose-tinted narrative: one that elevated the Vogue model turned surrealist muse into a fashionable trailblazer. (After all, she appeared on the cover of the fashion bible after literally bumping into Mr Condé Nast himself on the streets of Manhattan; trained under legendary visual artist Man Ray in Paris; documented the liberation of Dachau, and then bathed in Hitler’s tub; while famously having multiple love affairs along the way.) Instead, Teresa Griffiths’ docu lays bare Miller’s life in full: her depression, her alcoholism, and her early childhood traumas included.

“I do think it takes a certain character, and a certain rejection of the normal life to pursue this line of work,” says Addario, speaking about herself as much as Miller. One thing that separates the two women, time aside, is their way of dealing with their experiences. Miller packed that part of her life away in her attic, away from her one and only son, Tony Penrose, not to be discovered until long after her death. (Penrose features prominently in the documentary, too.) On the other hand, Addario’s memoir, It’s What I Do, has been optioned by Hollywood and linked to names like Steven Spielberg and Ridley Scott, Scarlett Johansson and Jennifer Lawrence. She’s currently exploring her options; “maybe I want to go in a series direction. Nothing is solid right now.”

The New York Times and National Geographic correspondent, who has covered global conflicts and the effects they have on women around the world – from Afghanistan and Libya, to Cuba and India – is zooming in from her sister-in-law’s house in Somerset, where she and her family are quarantining together. Between childcare duties, she’s venturing out to capture the underreported fatalities of COVID-19 in nursing homes, recalling how, despite the low mortality rate in the area, the funeral homes are running out of coffins. “I thought to myself, for historical purposes, we need to look at what’s happening.”

As the BBC's documentary premieres, Addario talks to us about Lee Miller, the importance of finding beauty (even in the darkest of places) and how war remains inextricably masculine.

On the importance of beauty

"We don't expect beauty and optimism in war, but I think it draws people in: it gives them an entry point and a place where they can let their guard down to explore and learn. Obviously not all [war] images are going to be beautiful, but I think it's important to not always push graphic material in people's faces. Most people feel uncomfortable with that; with the toughness, sadness and trauma of reality. I try, when I can, to incorporate beauty to make the subject more accessible."

The ubiquity of images

"Most of us have looked at images of conflict, war, and death for two decades now, especially since September 11. With social media, now everyone is a photographer and images are ubiquitous: the graphic nature of what we're seeing is all around us. I don't know if it has made us more tolerant, but certainly it has become more common to witness graphic pictures."

On dealing with the trauma of witnessing conflict

"Most people who cover conflict have a hard time talking about what they see to people outside of that world. When it comes to the really grim and dark stuff I’ve experienced, I'm most comfortable speaking about that with my colleagues. Miller obviously internalised so much, and I understand that too because I think that there's a place where we put everything, and it's a sacred space, where we process it on our own terms. There's a lot that people don't see and don't realise."

On photojournalism still being a boy’s club

"I think there are more women working as correspondents than when I first started out, but not that many more. There are a lot of women in photojournalism covering really important stories on addiction, immigration, poverty, race, and injustice, but when we talk about frontline combat, I still don't see that many women doing it. It's physically and emotionally taxing, and traumatic, and you have to make big sacrifices. And even when you’ve made those sacrifices, you face editors who often will not send women to a war zone. I’ve had a male editor say to me ‘I’m not sending you to Mosul, you’re a mother now.’ It’s a boys club, but you've got to be up for that."