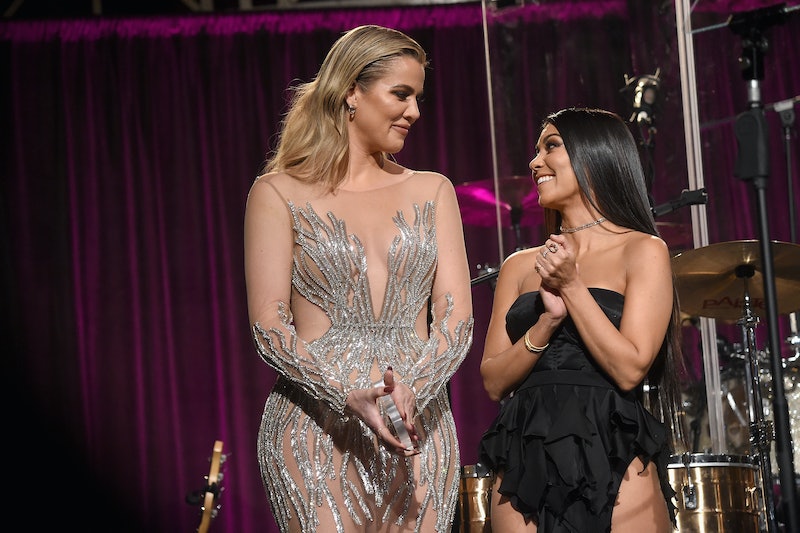 Once again, the Kardashians hosted the cutest party that you'll wish you were invited to. As E! News noted, the Kardashians and their kids had another cupcake party. And if you thought their last event was all kinds of adorable, just wait until you check out their latest, unicorn-themed affair.

The famous family truly outdid themselves with this most recent cupcake party. On Oct. 18, Khloé Kardashian shared a plethora of photos on Instagram from the little party, in which the "Kousins" dressed up as unicorns or superheroes. For this event, they went full blue with all of the decorations and party gear, which ranged from capes to unicorn crowns to, of course, the most delicious looking cupcakes ever. Khloé's daughter, True Thompson, was the belle of the ball in her unicorn outfit. Kourtney Kardashian's children, Penelope and Reign Disick, got in on the fun after missing out on the last cupcake affair.

Kim Kardashian's children, Chicago and Saint West, were also pictured at the party, along with their older sister, North West (who missed out on the last party like her cousins Penelope and Reign). Additionally, according to Kim's Instagram Story, Rob Kardashian's daughter Dream Kardashian also attended and had an adorable moment with her cousin Saint, as he handed her one of the goodies from the party.

Despite there being a few no-shows at the previous event, this cupcake party actually had some special, family guests. Grandma MJ made an appearance, as evidenced by Khloé's Instagram Story. The Lord himself, Scott Disick, also joined the family get-together, posing with his son, Reign, and sporting a new look.

Khloé's little one is seriously the most adorable "True-nicorn" out there. The reality star previously related that she had many costumes for her daughter during this Halloween season. And this cute outfit may just take the cake.

Khloé previously hinted at what this latest party would include. Following the previous event, she took to Twitter on Oct. 13 to discuss how excited she was to have all of the "Kousins" pose for an adorable and sweet photoshoot together. She wrote,

"Planning another cupcake party 4 Norths return w all the cousins. Maybe this time @kourtneykardash won't 'forget' lol I mean...I bought all of the girls tutus this morning!"

The Revenge Body star went on to describe that there's a strict "color scheme to abide by," which explains the gorgeous blue decor and outfits.

In a follow-up tweet, she wrote, "Maybe capes for the boys!!!" As Khloé's recent Instagram Story shows, the blue color scheme, along with the cape and tutu outfits definitely made for an adorable cupcake party.

The previous Kardashian cupcake party was also a hit. On Oct. 12, Khloé posted a photo of her daughter, True, posing alongside her cousins, Chicago, Saint, Dream, and Kylie Jenner's daughter Stormi Webster.