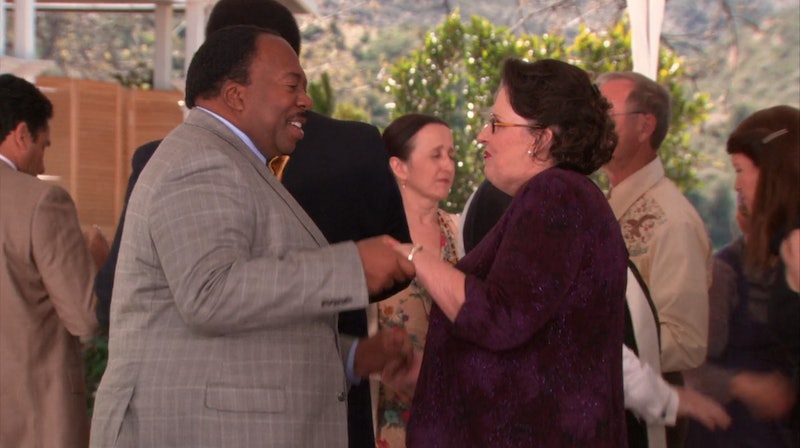 The two Dunder Mifflin paper salespeople who sat across from each other at the Scranton branch just had the cutest reunion. That's right, Phyllis and Stanley from The Office reunited recently and boy, does it feel so good to see them together. The photos of them hanging out will make you just as happy as that time Stanley made a woodcarving of Phyllis in the series finale.

As pointed out by PopSugar on Wednesday, the former costars, Phyllis Smith and Leslie David Baker, posed for photos at The OA Part II premiere event in Los Angeles. The best part is Baker showed up to support Smith, who stars in the Netflix drama as Betty Broderick-Allen. Baker and Smith are basically real-life versions of their characters, at least when it comes to Stanley Hudson and Phyllis Vance's friendship.

There's no denying Phyllis and Stanley had a great relationship. Most of the time their friendship flew under the radar and they appeared to be simply coworkers. Plus, with Stanley being a grump who just wanted to retire most of the time, one might not have thought he would've formed such a close bond with Phyllis. That said, seeing as they sat across from each other for a good portion of their working lives, Phyllis and Stanley grew to be true friends.

And now here are the actors who played the beloved characters in real life. The Office may have ended six years ago, but these two haven't changed one bit. They still look the same, don't they?

This isn't the first time Smith and Baker have reunited. Last December, the two, along with most of The Office cast, got together for quite the epic reunion. They came together with Creed Bratton, Paul Lieberstein, Brian Baumgartner, Oscar Nuñez, Rainn Wilson, Angela Kinsey, Jenna Fischer, Ed Helms, and the comedy's creator, Greg Daniels.

Even though certain cast members weren't in attendance, like Steve Carell or John Krasinski, the reunion was still heartwarming. Kinsey tweeted a group photo on Dec. 2, 2018, and sweetly shared,

"Some of the old gang got together today... it was so great to see everyone! I turned to Ed and said, 'I feel like we are at a family reunion.' He smiled and said, 'We are.' Thanks Greg for hosting! For those who couldn’t make it... you were missed!"

Of course, there have been many other Office reunions in the past, like when Carell literally jumped out of a box on a February episode of Busy Tonight to surprise Fischer for her birthday. If you haven't seen the video yet, you must watch it immediately.

The cast of the former NBC comedy really is as close as they appear. As Kinsey previously told Bustle last November, "Some of my very closest dearest friends in my life are from my chapter on The Office." She added, "Jenna Fischer is my best friend, Brian Baumgartner came by my house this week, Oscar was here today, Creed [Bratton] lives down the street from me."

See? They all formed an unbreakable bond. Even Smith and Baker can't stay away from each other and continue to support one another when it matters most, like at a premiere event.