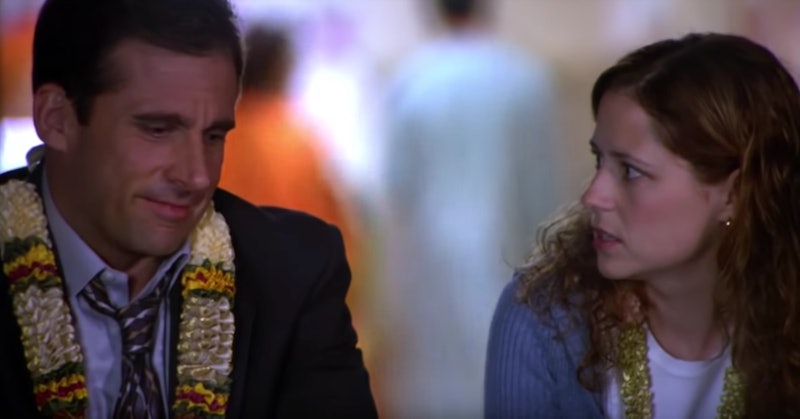 As anyone who has watched hours upon hours of The Office on Netflix can attest, there's no birthday present better than Michael Scott. Steve Carell surprised Jenna Fischer with a mini Office reunion on a recent episode of Busy Tonight after the Oscar nominee popped out of a giant box to scare his former co star.

During Fischer's appearance on Tuesday, Feb. 26's episode of Busy Tonight, host Busy Philipps celebrated her guest's birthday a week early by having her open a series of presents from her Office co stars. And after opening a few smaller gifts, Fischer was presented with the biggest box of all. She tentatively lifted the lid of the box, and was surprised — and a little scared — to find that Carell, himself, was waiting inside. "I wasn't expecting a human being to be in that box, and then on top of that, I wasn't expecting that human being to be Steve," Fischer said with a laugh after the big shock.

Carell laughed at Fischer's surprise, before joking about how long he spent waiting inside the box. "I enjoyed the conversation, it was great," the actor joked after Philipps apologized for having him hide in the box for "quite some time." It was worth it, clearly, just to see Fischer's shocked, and somewhat unsettled, reaction.

And, because she is truly the most relatable late night host of all, Philipps couldn't help but ask about a possible Office reunion. "I know that there's been a lot of Office reunion rumors because you guys posted that photo on Instagram [after having a cast brunch in November], and everyone was really excited, so is this it?" she asked. "We're doing it right now," Fischer laughed, meaning that fans will have to wait a little bit longer for the proper reunion they've been dreaming of.

Earlier, Fischer had offered a few behind-the-scenes tidbits about working on The Office while opening her presents from her fellow Dunder-Mifflin alums. "Creed [Bratton] played guitar and Ed [Helms] played banjo, and they played during lunch," Fischer recalled. "And Angela [Kinsey] and I would have lunch and listen to them play."

Of course, this is far from the first time that Carell and Fischer have surprised fans with a mini-Office reunion in recent months. Back in November, the actress — along with Helms and Ellie Kemper — made a cameo appearance during Carell's monologue Saturday Night Live monologue. During the bit, the trio implored Carell to sign on for an Office reboot, with Kemper reminding him that "people would really love to see an Office reboot ... especially me, because I need that money."

Though his reluctance to sign on for a reboot was played for laughs during SNL, Carell admitted in October of 2018 that he doesn't think there should be an Office reboot at all. "Apart from the fact that I just don’t think that’s a good idea," he told Esquire at the time, "it might be impossible to do that show today and have people accept it the way it was accepted ten years ago."

"The climate’s different," Carell explained. "I mean, the whole idea of that character, Michael Scott, so much of it was predicated on inappropriate behavior." Carell continued to point out that, in today's climate, a character like Michael wouldn't be so easily accepted."There’s a very high awareness of offensive things today — which is good, for sure," Carell said in the Esquire interview. "But at the same time, when you take a character like that too literally, it doesn’t really work."

While a proper Office reboot might not be in the cards, at least fans can take comfort in the prospect that the cast will continue to surprise fans — and each other — with get togethers in the future. And if Carell ever wants to surprise us by hiding in a box, it'd be even more exciting than a full-blown reunion.