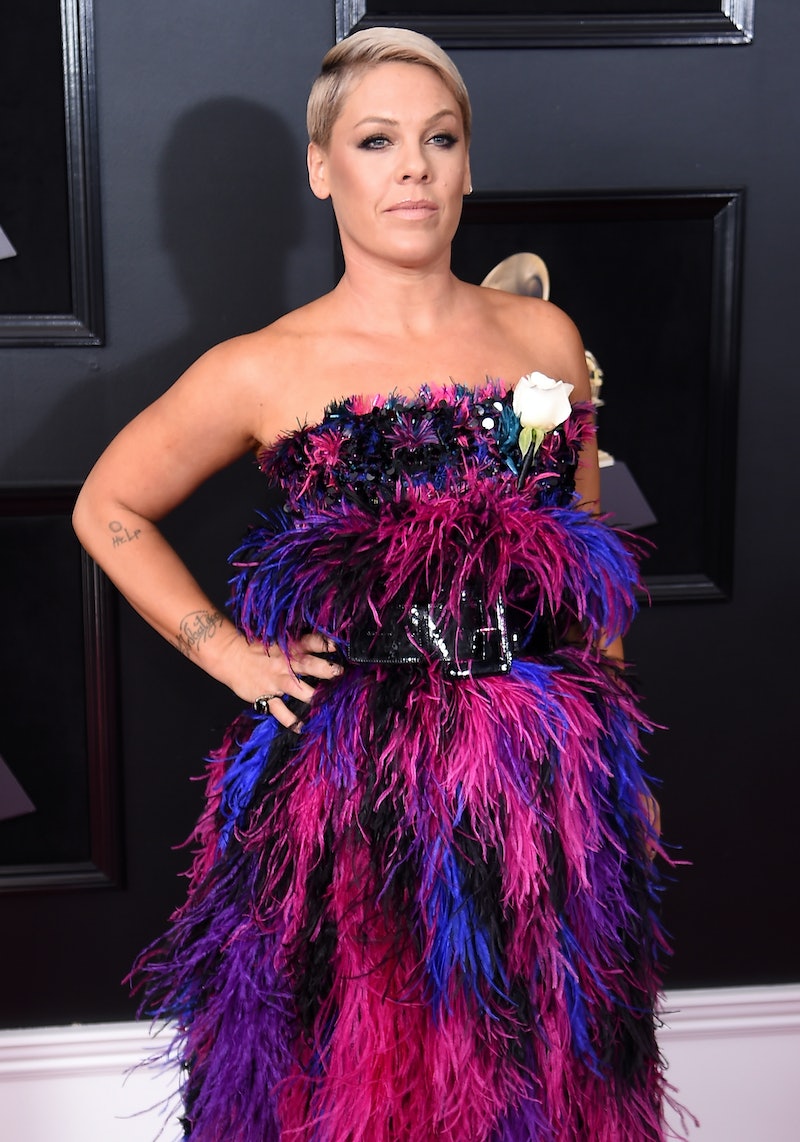 Pink just lost her 20th Grammy nomination, but she doesn't seem to mind. The "What About Us" singer has her own award, and it's one of a kind. Pink's daughter made her a homemade Grammy Award, and it's honestly too precious.

In an Instagram post after the big show, the singer shared a photo of her daughter Willow holding up a faux Grammy Award made out of tinfoil. Written in marker, the award says it's for Best Pop Vocal Album, which Pink's Beautiful Trauma was nominated for this year. (Ariana Grande's Sweetener took home the win for that category at Sunday evening's awards show.)

"Thanks Kids:) my favorite kind of award," Pink captioned the photo. It looks like she's not too upset over the loss, choosing instead to focus on the support she has from her family members. (And really, what's better than being presented an award that's handcrafted by a loved one?)

Plus, in addition to the tinfoil award, Pink already has three Grammys of her own. She won the Best Pop Collaboration with Vocals award in 2010 for "Imagine," as well as the Best Female Rock Vocal Performance Grammy in 2003 for "Trouble." Her first Grammy Award was in 2001, for "Lady Marmalade," also in the Best Pop Collaboration with Vocals category. So Pink still has plenty of non-tinfoil awards to keep on her shelves.

In fact, Pink wasn't at the 2019 Grammy Awards in the first place. Based on a tweet Pink shared on Sunday, Feb. 10, it looks like she spent the evening taking care of a sick child. (Since Willow looks pretty happy and healthy in the Instagram photo, the sick child was likely Pink's son Jameson.)

"I think it's kind of rad that I just lost my 20th Grammy nomination. I'm always honored to be included," Pink tweeted on Sunday. "Now to get this sick baby in the bathtub. Congrats to all the nominees! Have fun tonight."

As for the tinfoil award, it looks like Pink's daughter got the idea from her dad. E! News points out that last week, the singer told Ellen DeGeneres that her husband, Carey Hart, has made her a tinfoil "Grammy" for every nomination she's lost. "This will be my 17th tinfoil Grammy on Sunday," Pink told DeGeneres last week, per E!.

Aside from the Grammy nominations, Pink also has another major reason to be proud of her accomplishments. Last week, Pink got a Walk of Fame star in Hollywood. And, naturally, her family members were all there at the ceremony to help her celebrate. "Thank you to everyone who made yesterday possible," Pink wrote in an Instagram post about the ceremony.

The tinfoil Grammy replicas may not be recognized by the Recording Academy, but they clearly have a special place in Pink's heart. If it's the thought that counts, Willow's creation gets an A+ for effort. And anyway, how many other artists can say they have 17 tinfoil Grammy Awards? Pink definitely holds that special (and super sweet) distinction.