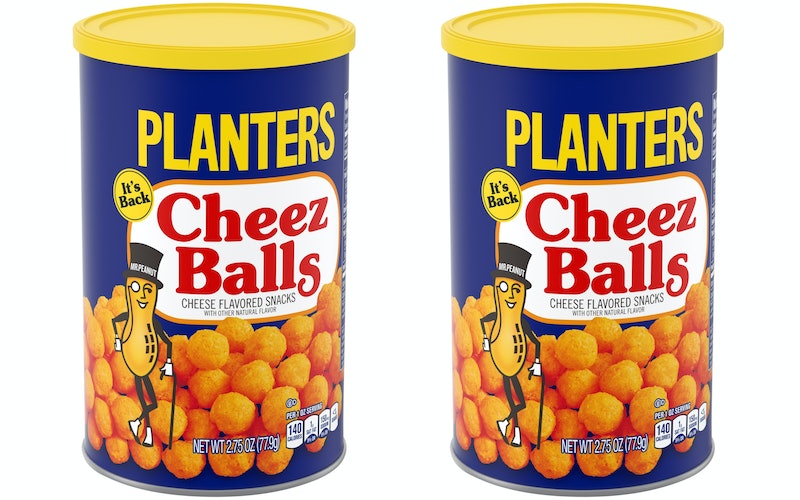 There are a number of age-old questions one is confronted with during their lifetime. Classic examples include "Which came first: the chicken or the egg?" and "If a tree falls in the forest, does it make a sound?" But one that has been entrancing the culinary world as of late involves two of the most scrumptious, decadent foods. Given the option, what would you choose, chocolate or cheese? The folks at Planters appear to be banking on Team Cheesy, now that Planters Cheez Balls are back for a limited time.

Planters Cheez Balls were an iconic snack for decades. The little unnaturally orange spheres of salty, cheesy goodness were an essential component of every game night, barbecue, lunch box, and dive bar. But 12 years ago, with little explanation, Cheez Balls disappeared from Planters' website and repertoire. Since then, fans of the balls have done everything in their power to get the company to bring back the snack.

One petition, organized on Change.org by Kim Butters, even suggests the disappearance of Cheez Balls can linked to the turmoil the world is facing. She asks, "The entire world is in a chaotic tailspin. There is evil and danger everywhere you turn. Have you ever stopped to ask yourself why? Have you ever considered that it's because you took Planters Cheez Balls away from us?"

Though the petition was unable to reach its goal number of supporters, Planters must have understood the public's dire need for their long-lost cheesy creation.

To call fans of the snack excited at the prospect of eating Cheez Balls again is a massive understatement. When Mr. Peanut, the Planters mascot tweeted last week about the possible return of Cheez Balls, fans responded with over 500 retweets and almost 4,000 likes. When one user responded, saying "Ive tweeted multiple times about these over the years, and on IG. Even signed a petition years ago. This makes me so happy," Mr. Peanut responded with an encouraging, "Don't let anyone say you've never made a difference!" Knowing the devoted fans of Cheez Balls played such a central role in the snack's return makes each little orange sphere taste even better.

Who knows? Maybe if the public responds well to the reintroduction of Cheez Balls, it will start a movement by companies to reintroduce since-defunct eats from the '90s? Actually, maybe the movement has already begun. Cheez Balls are not the only quintessential nineties nom to be making a long-awaited return to pantries.

Back before the new millennium, there was no line separating appetizing from weird. If anything embodies that sentiment, it is Nickelodeon's green ketchup. The neon monstrosity was magically strange: it looked like the slime from Double Dare and tasted like regular ketchup. Now, thanks to Walmart's Great Value brand, it too is back on shelves, and sure to delight and horrify french fry connoisseurs everywhere.

Of course, just because Cheez Balls and green ketchup are back does not mean all the work is done. One of the most beloved '90s snacks continues to be missing from shelves, and its likelihood of its return is not so clear. While Walmart (which has become an unexpected superhero in the quest for nineties snacks) did their best to recreate them, Dunkaroos are nowhere to be found in the United States. Even A-List celebrities are weighing in on the issue. But, one can hope right? Cheez Balls were gone for more than a decade and soon it'll be as if they never left.

Both Planters Cheez Balls and Cheez Curls will be available once again for a limited time, starting July 1. You can find them on Amazon and Walmart.com, with more stores carrying them in the near future — so Cheez it up while you still can.

More like this
Andie From 'How To Lose A Guy In 10 Days' Is A Total Gemini
By Nina Kahn
Dunkin’s Valentine’s Day Lineup Includes A Drink That Tastes Like Dessert
By Alexis Morillo
15 Black-Owned Liquor & Wine Brands To Add To Your Bar Cart
By Alexis Morillo
12 Aphrodisiac Desserts To Spice Up Your Valentine’s Day
By Kaitlyn Wylde
Get Even More From Bustle — Sign Up For The Newsletter
From hair trends to relationship advice, our daily newsletter has everything you need to sound like a person who’s on TikTok, even if you aren’t.