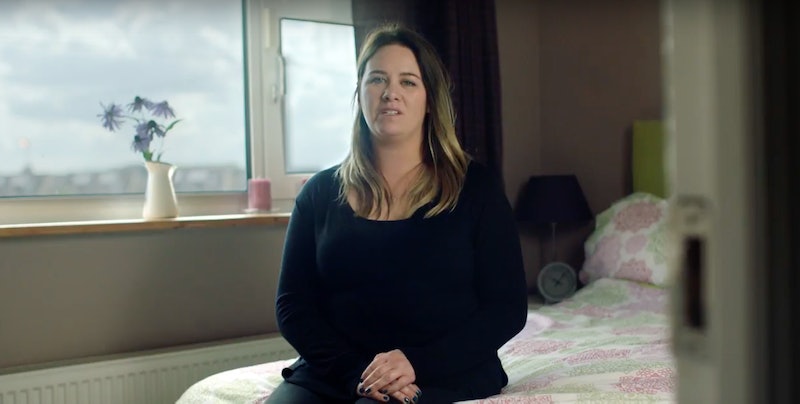 As frightened as I often am about the fate of reproductive rights in the United States right now, I know that I’m lucky — because right now, abortion is still legal, thanks to Roe v. Wade. In many other countries, it’s not: In Ireland, for example, the Eighth Amendment effectively outlaws abortion — and many, many people have suffered, are suffering, and will continue to suffer as a result of it. That’s exactly what the video “25 Annoying Things About Being Pregnant” gets at: Created by Amnesty International as part of the Repeal the Eighth campaign, it underlines exactly why safe, legal access to abortion is so necessary — and why we need to keep fighting for reproductive rights.

The video begins lightheartedly, peppered with familiar-sounding items identifying some of the more irritating aspects of pregnancy — things like, “Being so big, I couldn’t get myself out of the bathtub without help” (definitely annoying), and “Strangers coming up to touch your bump” (reminder: DO NOT TOUCH OTHER PEOPLE WITHOUT PERMISSION), and “Not being able to paint your toenails.” They’re the kinds of things we’ve come to expect in articles and videos titled “25 Annoying Things About Being Pregnant”: Things that are true and relatable. And they’re important, in their own way — if you yourself are pregnant, they’re a reminder that lots and lots of people have been where you are. Others know and have sympathy for what you’re going through.

But about 45 seconds in, the tone abruptly shifts. The items become things like:

“When you’re forced to carry a baby that can’t survive out of the womb.”

“When you lose your free will.”

“When you’re not given all the information, because you don’t have a choice anyway.”

“When you don’t think the Eighth Amendment affects you… until it does.”

That’s where the Coalition to Repeal the Eighth Amendment, often simply referred to as Repeal the Eighth, comes in. It’s an alliance of more than 90 organizations from a variety of backgrounds — human rights, feminist and pro-choice, trade unions, health organizations, and more — fighting to repeal the Eighth Amendment of the Constitution of Ireland. Although abortion has long been illegal in what is now the Republic of Ireland — the Offenses Against the Person Act of 1861 stated that “procuring your own miscarriage” was a felony, while providing anything to anyone else that helped them “procure a miscarriage” was a misdemeanor — the Eighth Amendment, passed in 1983, took it a disastrous step further. The amendment states, “The states acknowledges the right to life of the unborn and, with due regard to the equal right to life of the mother, guarantees in its laws to respect, and as far as practicable, by its laws to defend and vindicate that right.”

In a report published earlier this year about the fight for abortion rights in Ireland, Joel Gunter explained what the Eighth Amendment does — and it is horrifying in that simplicity (emphasis mine): “The Eighth Amendment passed in 1983 and granted a foetus equal rights to life as its mother, effectively outlawing abortion in all circumstances.” Repeal the Eighth elaborates, underlining the facts that under the Eighth Amendment, abortion is “banned except where a woman’s life is in immediate danger,” “not permitted where a woman’s health is affected, so women only have a qualified right to healthcare while pregnant,” and “not permitted in cases of rape or incest”; additionally, the amendment forces women to carry to term even when “fatal foetal abnormalities are detected.” But what it all comes down to is this: The fetus (which, reminder: A fetus can’t think or make decisions, because it isn’t a person) has equal rights, which means that except under very extreme circumstances, there is no access to safe, legal abortion in Ireland.

Pregnant people are permitted to travel to other countries for abortion services, and they do — Repeal the Eighth estimates that about 4,000 people do this every year. But not everyone is able or can afford to do that, which some believe makes the law discriminatory. Indeed, Repeal the Eighth believes the amendment to be “a source of discrimination against all women living in Ireland”:

It creates a discriminatory health system where a pregnant woman only has a qualified right to health care. International human rights organizations have repeatedly taken the state to task for its draconian abortion regime, observing that it violates women’s right to bodily integrity and self-determination.

You know what taking away safe, legal abortion services does do, though? It makes people much more likely to seek out alternatives — which, of course, are often not safe. As George Monbiot put it in The Guardian in 2016 in a discussion of the aforementioned study, “There is no association between [abortion’s] legality and its incidence. In other words, banning abortion does not stop the practice; it merely makes it more dangerous.”

When performed safely and legally, the procedure is incredibly safe; indeed, according to a study from 2014, the rate of minor complications from abortion is lower than they are for childbirth, and the World Health Organization (WHO) puts the death rate from abortion at 0.6 per 100,000 procedures, which is very, very, low. With unsafe abortions,though, it’s a completely different story: According to WHO, 47,000 women die from complications of unsafe abortions, and 13 percent of all maternal deaths worldwide are due to unsafe abortions.

Laws like the Eighth Amendment don’t lower abortion rates, or keep parents or kids healthier. They just hurt everyone.

The laws in Ireland might be changing, although that change has been slow to come, and not as completely as is necessary. In April, the Citizen’s Assembly, which examines specific political issues and makes recommendations about them to the Oireachtas (Ireland’s parliament), voted overwhelmingly against the Irish government retaining the Eighth Amendment as it currently stands; however, a second round of voting failed to secure a majority for the option of repealing the amendment entirely. Instead, the Assembly voted to amend the Eighth Amendment, 50 to 39. Current Taoiseach (essentially the prime minister, a position appointed by the president) Leo Varadkar recently announced his intention to bring forth a referendum on abortion laws in 2018, although what form the question of the referendum will take remains to be seen.

But in the meantime, Repeal the Eighth is continuing to fight, for all the reasons laid out in this video and more. And it’s why the fight for reproductive rights continues across the world — in Ireland, in the United States, and everywhere else, as well. If you want to help, here are a few things to do to join the fight. Because the right to bodily autonomy should not be up for debate.