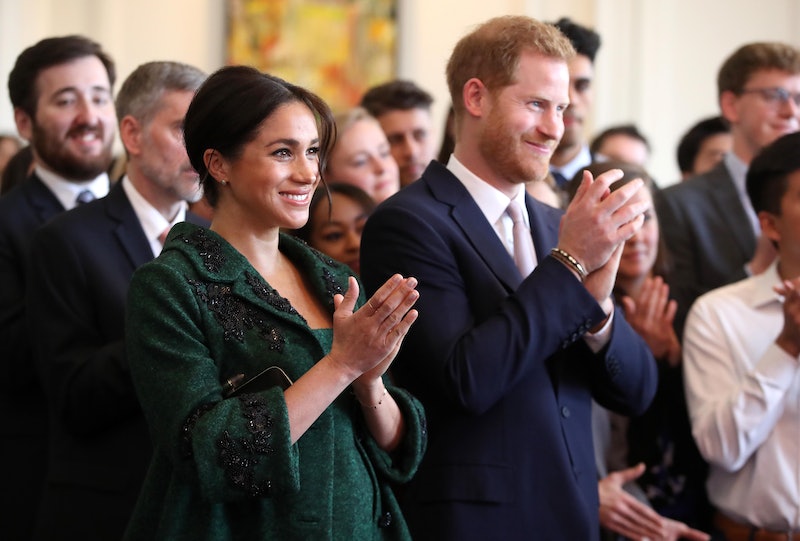 The Duke and Duchess of Sussex aren't just giving back to their community for their worldwide, virtual baby shower, they're honoring their roots with their choice of charities as well. According to People, Prince Harry and Meghan Markle chose a Los Angeles-based charity as one of the four organizations they highlighted for the #GlobalSussexBabyShower. Of course, the choice is an especially meaningful one for the duchess, as the move serves to celebrate the now-British royal's California-based background.

On April 5, following a fan-led campaign, the aforementioned #GlobalSussexBabyShow, Harry and Markle urged their followers to donate to some of the causes close to their hearts. The couple announced, via their new Instagram account, that they're highlighting four different charities in case there are those who wish to donate in order to honor baby Sussex.

One of those organizations in particular, Los Angeles-based Baby2Baby, was chosen in order to honor Markle's hometown, proving the British royal hasn't forgotten her American roots. Each of the charities that the couple chose were featured in separate posts on their Instagram account, in order to properly acknowledge the work done by each organization. In the post honoring Baby2Baby, the caption read, "As a native of Los Angeles, The Duchess of Sussex wanted to include a locally based charity from her hometown that helps children and parents in need." The caption continued to detail:

"Baby2Baby provides children ages 0-12 living in poverty with the necessities every child deserves. In the last seven years, B2B has distributed over 50 million items to children in homeless shelters, domestic violence programs, foster care, hospitals, underserved schools, and to children who have lost everything in the wake of disasters. Please consider supporting this very special organization."

In addition to Baby2Baby, the couple also chose to honor The Lunchbox Fund, Little Village, and WellChild.

In response to the Duke and Duchess of Sussex's choice, those within the Baby2Baby organization expressed how grateful they were to be honored. “We are incredibly grateful to have been highlighted by The Duke and Duchess of Sussex in honor of their first baby,” Baby2Baby Co-Presidents Norah Weinstein and Kelly Sawyer Patricof said, according to People, “Their generosity will allow us to provide even more children with the necessities they deserve, in the Duchess’s hometown of Los Angeles and across the country.”

As many royal watchers are fully aware, Markle grew up in Los Angeles. According to the Los Angeles Times, she attended Immaculate Heart High in the city and, naturally, spent a great deal of time in close proximity to the entertainment industry, as her father worked on shows such as Married... With Children. Seeing as though the California city is close to Markle's heart, it's easy to see why the couple would honor a charity based in the duchess' hometown.

Markle and Harry previously announced their creative baby shower registry on April 5, and detailed that it was actually inspired by their adoring fans. They wrote on Instagram, "What an incredibly special surprise the grassroots led #globalsussexbabyshower was last Sunday! The Duke and Duchess of Sussex are immensely grateful for the outpouring of love and support in anticipation of the birth of their first child."

It's pretty amazing that a fan-driven, social media movement inspired the Duke and Duchess of Sussex to officially honor causes that are near and dear to their hearts. But, it just goes to show you that those royal watchers may have simply taken a page out of their favorite couple's book by putting a charitable foot forward.