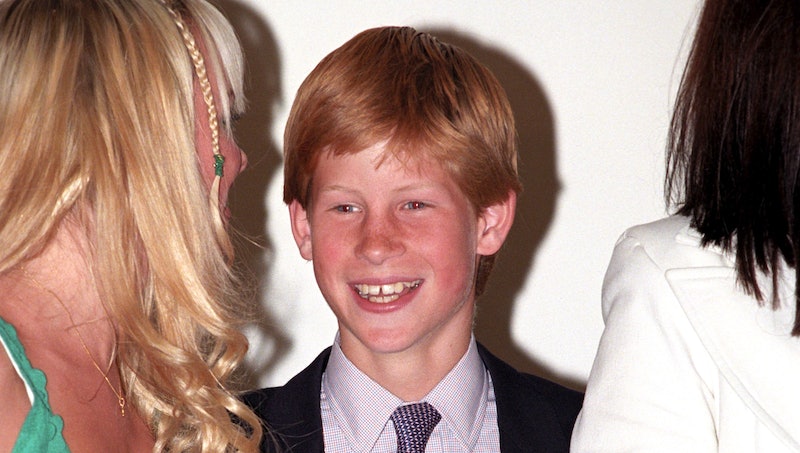 Being adolescent is pretty hardcore. All those hormones, emotions, confusion, sexual awakening — y'all it is an actual mine field. Now imagine being a 13-year-old boy and meeting the hottest girl band in the history of the world. Well at the height of Spice-mania, Prince Harry met The Spice Girls and the pictures are adorable.

Is there anything more '90s than a boy prince meeting the Spice Girls? Perhaps not, and lil Hazza was knee-high to a grasshopper at the time. Smiling ear to ear with a ginger crop evocative of Archie from Archie Comics, Harry served delighted in absolute abundance.

So how did this all happen? Well, in autumn 1997, Prince Harry went on a safari trip with his mate and a nanny (I know this is already dead posh), TIME reports. Anyhow, they had a gay old time in Botswana, and I assume lashings of ginger beer. Then 13-year-old Harry was picked up at the end of the trip and hopped on a plane, heading straight down to South Africa to meet papa, Prince Charles.

Whilst in Johannesburg, Charlie was basically like "OK Hazza, I got to go see my pal Nelson Mandela, you wanna come with?" Yes, a diplomatic summit. Just what every 13-year-old dreams of. But babe, the plot definitely thickens. Prepare to nearly dislocate your jaw in amazement.

Real talk. So the icing on the cake of this particular summit was, well, The Spice Girls. Mandela and Prince Charles were uber praising of the gals, and their message of feminist power. Yes Girl Power! With Mandela even going so far as to say to the BBC that it was "one of the best moments of my life". I mean, who would blame the guy really.

But what about Harry? Well according to the report from Time, they got to enjoy the Two Nations charity concert where the band performed, and Harry got lots of one-on-one attention. The girls were holding his hand, and according to reports, he got extra special love from Baby Spice who gave him a big smacker on the cheek. OMG I bet he was like, such a bad man when he went back to school.

Well what do you think Harry's wife Meghan thought about all of this? Well it looks like she might well have been like, well jeal. Yep, they are fans. So much so that there were rumours that the band would reform for the pair's wedding. These rumours were quashed by Mel C, Harper's Bazaar reports, and even though two did become one — it would seem the Spice Girls were indeed a no show.

However, fans were able to turn those frowns upside down when our girls lifted the hearts of the nation and the world during a pretty crappy time. Yes, the announcement that the band would be reforming, sadly minus Victoria Beckham, left many fans (me) in hysterical, choking tears of joy. Ugly crying like Kim, and desperately trying to buy tickets for this momentous event.

No word yet on whether Harry and Meghan will be in attendance but even in the earliest stages of marriage, everyone needs to Spice up their life, am I right?