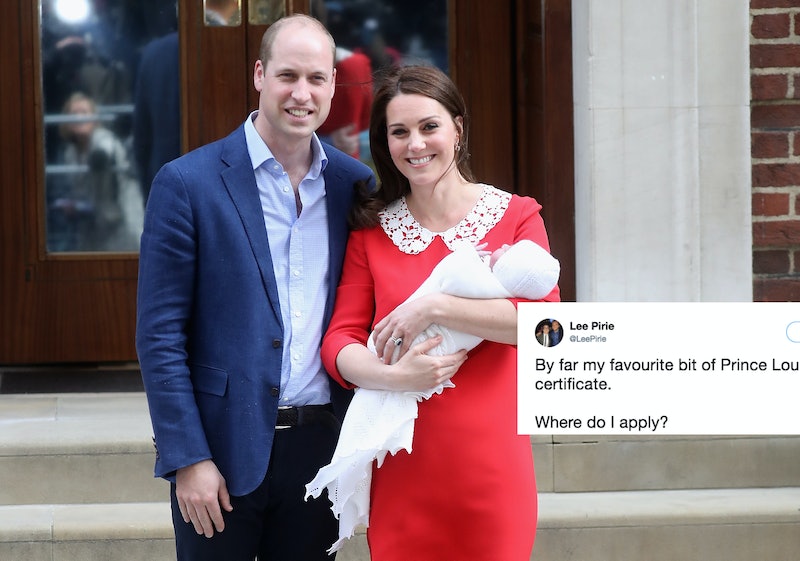 Last week, Saint George's Day brought the world the ecstatic news of the birth of the Duke and Dutchess of Cambridge's third child. And on Tuesday, May 1, Prince Louis of Cambridge's birth certificate was made public — and you'll get a kick out of what William and Kate Middleton's occupations are listed as on the document.

While a birth certificate is a standard procedural right-of-passage for newborns across the globe, Prince Louis Arthur Charles' document (like so much in his royal little universe already) is just plain fancy. When filling out the document's "occupations" section, Prince William and Middleton record their jobs as "Prince of the United Kingdom" and "Princess of the United Kingdom," respectively. Wait, are they accepting applications?

Of course, no one would argue that those aren't full-time careers. On April 29, Kensington Palace shared a heart-melting tweet commemorating the seven-year anniversary of the couples' impossibly extravagant wedding back in 2011 — a worldwide event that kicked off nearly a decade of travel and charity work for the young royals. From launching the Commonwealth's Invictus Games to spearheading a mental health initiative known as the Heads Together campaign, Will, Middleton, and Harry have been proving for years that there's a lot more to becoming an heir to the British throne than throwing a mind-bogglingly expensive wedding bash (though no one seems to mind the spectacle of those either).

And with Meghan Markle set to marry Prince Harry in just two weeks on May 19, it seems like they're certainly gaining another strong, empathetic partner for their outreach work — just ask Quantico star Priyanka Chopra.

Beyond the section naming his famous parents' "occupations," Prince Louis' birth certificate is actually pretty standard. According to Us Weekly, the document was signed by Prince Will, and his signature was witnessed by Westminster City Council registrar Patricia Gordon. “It has been a great honor to register and formally welcome the latest addition to the royal family, Prince Louis Arthur Charles,” Gordon told Us Weekly in a statement. “This follows a long history of Westminster City Council registering royal bites including Prince Louis’ siblings Prince George and Princess Charlotte.”

Unsurprisingly, though, Twitter just couldn't handle the "occupations" section about Prince Louis' parents, spurring an endless thread of "where do I apply?" jokes that've left the internet desperately searching for a royal employment opening.

The same thing happened back in 2013 and 2015, after the releases of Prince George and Princess Charlotte's birth certificates, which said the same thing. While the House of Windsor doesn't seem to need any new additions at the moment, working on perfecting Markle's beloved messy bun might be a good place to start in the meantime.

As an 8-day-old baby, Prince Louis can already count a few remarkable brushes with fame (grandma aside), even before he'll be able to remember them. One Direction singer, Louis Tomlinson, sent the newest royal an adorable tweet, jokingly pledging to help guide a fellow Louis as he grows up. "Young Louis, welcome to the world. I'll take you under my wing, lad. The Adidas tracksuit is in the post!" the 26-year-old pop star wrote.

And former First Lady Michelle Obama posted a sweet Instagram congratulating the Duke and Duchess of Cambridge — and commemorating that unforgettable moment back in 2016 when Prince George met President Obama while wearing his bathrobe. The universe is absolutely waiting with baited breath for a glimpse of the tiny Prince wearing Tomlinson's gifted Adidas tracksuit. Is this too wild, or does Prince Harry's wedding seem like the perfect occasion for it?

More like this
Kate Middleton & Prince William Were Booed & Mocked On Their U.S. Visit
By Jake Viswanath
Kate Middleton Shares The Key To Building A "Happier Society" In A New Op-Ed
By Stephanie Topacio Long
Here's Who's *Really* In Charge Of The Royal Family
By Savannah Walsh and Meguire Hennes
Archie & Lilibet Are Eligible For Royal Titles — But There's A Catch
By Jake Viswanath
Get Even More From Bustle — Sign Up For The Newsletter