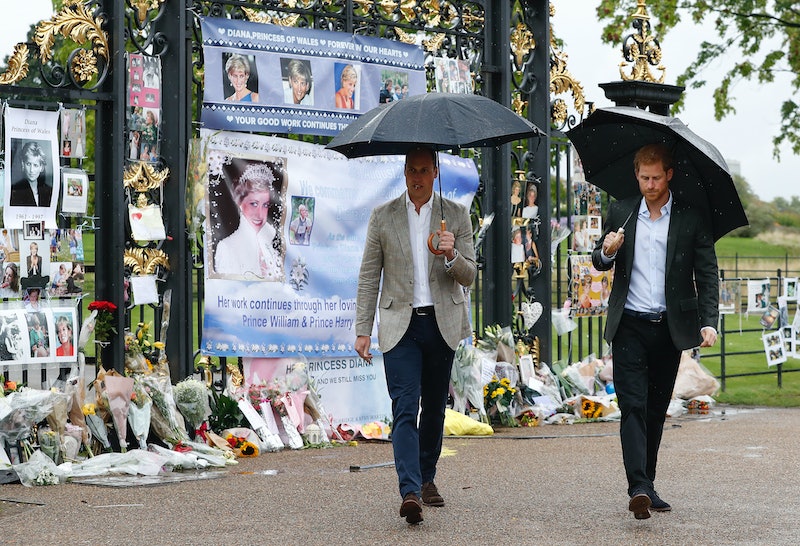 With the 22nd anniversary of their mother's death just days away, Prince William and Prince Harry are expected to honor Princess Diana, as they do every year. According to Us Weekly, one of the brothers' traditions involves either a lunch or dinner at London's Kensington Palace on Aug. 31, the day Princess Diana was killed in a tragic 1997 car crash in Paris. Despite the date's painful significance, the Duke of Cambridge and Duke of Sussex typically spend the day together reminiscing about happier times.

“They talk about the little things about Diana that made them laugh: the ski trips and outings to Thorpe Park [a British amusement park]; the effort she went to on their birthdays — all of it,” an unnamed royal insider revealed to the magazine.

The source added that “their other halves and kids join them later.” For Harry, that, of course includes his wife Meghan Markle, Duchess of Sussex and their almost 4-month-old son Archie. Meanwhile, William's family is comprised of wife Kate Middleton, Duchess of Cambridge, as well as their three children: George, 6, Charlotte, 4, and one-year-old Louis.

The two dukes also have a special way of keeping their mom's memory alive, according to Us. “They always discuss Diana’s charity work and brainstorm ways they can continue her legacy,” adds the insider. “Helping others and being a role model to those less fortunate is at the top of their priority list.”

Indeed, just two weeks ago, Harry and Meghan shared a Princess Diana quote via the official Sussex Royal Instagram account that perfectly encapsulated her impact on their charity work: "Carry out a random act of kindness, with no expectation of reward, safe in the knowledge that one day someone might do the same for you."

As the couple explained in the IG caption, "Words have the power to inspire, which is why we’re happy to share some of our favorite quotes. Although they began by quoting the Princess of Wales, they explained they'll also be sharing wise words from "members of the public to public figures, from teachers and students to young leaders."

This wasn't the first time Diana's youngest son and his wife paid tribute to the late royal on Instagram. As part of their new tradition of rotating the accounts they follow "based on causes and social issues that matter" to them, the couple dedicated June to the LGBTQ+ community. One touching photo in the collage they posted included Diana — who fearlessly campaigned for AIDS awareness and de-stigmatizing the disease prior to her death — sitting on the edge of a patient's hospital bed. In April 1987, she opened the UK's "first purpose built HIV/Aids unit that exclusively cared for patients infected with the virus, per the BBC.

In fact, Princess Diana's influence on Harry's charity work in particular has been evident for quite some time. Just like his mom, Harry has spoken out against the use of landmines, and as People reported back in June, the Duke and Duchess of Sussex's upcoming trip to Africa very well may show the couple following in her footsteps. In one iconic moment during a 1997 trip to Angola, Diana walked through an active landmine area to raise awareness for the fight against their use.

“Everything about Harry’s thoughtfulness and the inclusion of [Princess Diana’s stones] and obviously not being able to meet his mom, it’s so important to me to know that she’s a part of this with us,” Meghan said during a joint Nov. 2017 BBC interview, following their engagement.

Noting that he has no question Diana and Meghan would've been “thick as thieves" and even "best friends," Harry added to the BBC that he knows that if Diana was still alive, "she would be over the moon, jumping up and down, so excited" about the engagement.

The late Princess of Wales' spirit certainly is living on in the next generation — and her boys' remain steadfastly devoted to keeping her memory alive as well.