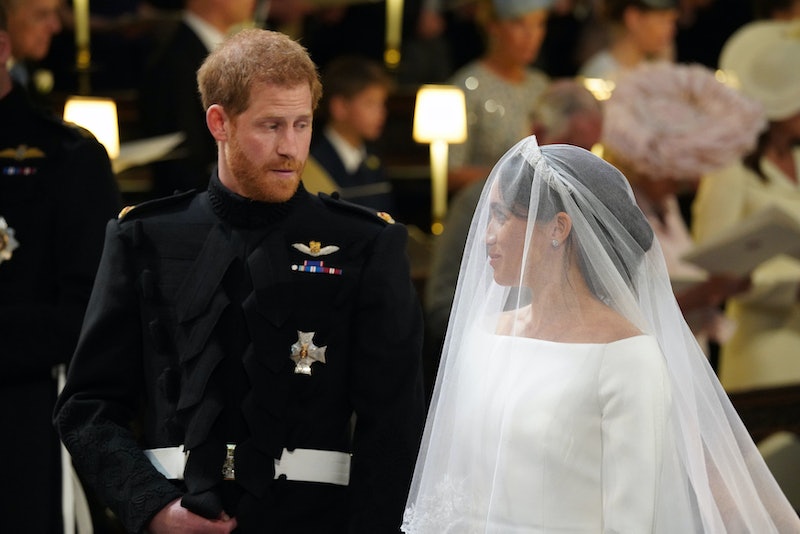 Saturday's royal wedding was chock-full of emotion and tea-jerking moments. But one of the more solemn, and powerful, came when Diana, Princess of Wales' sister, Lady Jane Fellowes, delivered the day's reading. Lady Jane Fellowes' appearance is particularly surprising and meaningful since she has largely kept out of the spotlight since her sister's death.

There have been some murmurs that Lady Jane Fellowes had a strained relationship with her sister after the divorce, since Fellowes' husband — Lord Robert Fellowes — had been promoted to the Queen's number one private secretary in 1990. That meant he was the primary liaison between Queen Elizabeth and the government of the United Kingdom. Paul Burrell, Diana's former butler, claimed this put some distance between the sisters. But, like any royal gossip, that can be taken with a grain of salt.

Lady Fellowes has also managed to maintain a pretty low-key public presence. She has not spoken to the media since her sister's death, and she was also the only one of Princess Diana's siblings not to appear in a recent BBC documentary about Diana's life.

But none of this is to say that she's been away from the family. Fellowes, along with Prince Charles and her other sister, Lady Sarah McCorquodale, carried Diana's body back to England in 1997. And at her sister's funeral, Fellowes read a poem by Henry Van Dyke Jr (making Saturday's reading doubly meaningful).

She was also seen at the 2011 royal wedding, although she didn't speak there. Prince Harry's aunt also attended his graduation from the Army Air Corps pilot course in 2010.

When the announcement was made that Fellowes would be reading at the wedding at St George's Chapel, Windsor Castle, a Palace rep added that "Prince Harry and Ms. Markle both feel honoured that Lady Jane will be representing her family and helping to celebrate the memory of the late Princess on the wedding day."

And honored everyone was. On Saturday, she read poignant words from The Bible as Harry's eyes seemingly welled up in tears.

They definitely chose the right person to deliver those words.

It was a moment of absolute calm and reflection before the boundary-breaking speech by The Most Rev. Michael B. Curry, who also quoted "love is as strong as death" in his rousing sermon. Moments like those, which echoed throughout the whole ceremony, made sure that guests and viewers were reminded of Diana's presence.

The groom's mother has been part of the couple's journey from the engagement through the ceremony Saturday. Meghan Markle's engagement ring — which Prince Harry used to propose back in November — included diamonds from his mom's jewelry collection. And during the couple's first post engagement interview with the BBC, the couple stressed how important it was for them to include Diana from the wedding day forward.

On Saturday, of course, Lady Fellowes' speech was one of the most direct moments, but even the decor was a nod to the late Princess. The wedding flowers at St. George's Chapel honored Prince Harry's mom, who famously loved white garden roses. And while the public can only guess what the guests were thinking based on the looks in their eyes, one thing is for sure: viewers definitely had Princess Di on their minds.

Although the nods to Princess Diana through the ceremony were more traditional, she would likely have absolutely loved all of the more progressive moments of the ceremony. And it's safe to say she would approve of Meghan Markle, Duchess of Sussex, whose love for Prince Harry is clearly the real deal. Lady Fellowes' reading was a perfect way to fold Princess Diana's legacy into the royal wedding proceedings.