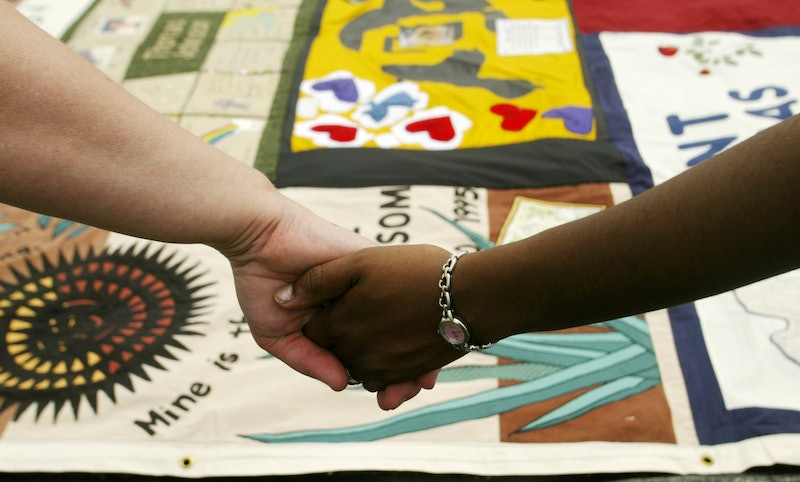 Ever wondered about the origins of Extinction Rebellion’s logo or how the Pussyhat became synonymous with the Women’s March overnight? Consider this your starting point. First and foremost, protest is about people taking to the streets and mobilising against injustice – but the art, logos and objects that come to represent these uprising are often striking. Through six historic objects – from the ‘Dike - Just Do It’ Pride T-shirt to the Pussyhat – Bustle looks at the origins and significance of protest design.

First conceived in 1985, the idea for the NAMES AIDS Memorial Quilt came about following a candlelit vigil held after the assassinations of San Francisco’s mayor George Moscone, who appointed the city’s first openly gay elected official, Harvey Milk, as his Supervisor. Organisers of the memorial asked marchers to commemorate their friends and loved ones who died during the AIDS crisis by pasting their names across the front of San Francisco’s Federal Building. “The stigma was so powerful,” the activist Cleve Jones recalled, speaking to WTTW years later. “But finally people began writing these names, and we marched.”

“It was a cold, drizzly night with a few thousand people just reading these names and crying,” he said. “No speeches. No music. And I thought to myself, ‘It looks like some kind of strange quilt.’”

What’s the significance of patchwork quilting in protest art?

Warm, comforting, and evocative of home, quilting has featured in art and protest design before.

The women of Gee’s Bend have been repurposing old clothes and scraps of textiles to sew bold, bright improvised quilts since the 19th century: many of the community are descended from slaves, and now live in a community alongside the Alabama River – they use their sewing skills to create something larger, creative and meaningful. “What is invisible, thrown away, could be made into something so it demonstrates that even what gets thrown away, with a spirit in it, can survive and grow,” wrote the American sculptor Joe Minter. Earlier in the ‘80s, women in the Soviet Union banded together to create the Boise Peace Quilt Project. And Cleve Jones’ case, he was inspired by his grandmother giving a new lease of life to his grandfather’s old clothes, by working them into a blanket.

“Quilting is a collective activity that gives strength of voice to the otherwise unheard,” says Corinna Gardner, curator of the V&A’s Rapid Response collection. “Be that refugee women quilting as a means to raise awareness of their plights in London, or indeed quilts made by prisoners.”

“I think it also grows out of skill sets that individuals already had,” she says. “If you were a low income individual, fixing, mending and patching your clothes was a given. That was one of your everyday skill sets. Redeploying that skill to give voice is a small one of capability, but a significant one in terms of agency.”

And what’s the meaning behind the AIDs Memorial Quilt?

Cleve Jones, who counted Milk as a friend and mentor, set out on a mission to create an enormous collaborative quilt to remember those lost to AIDS following his vigil, and in 1987 the first forty panels of the quilt went on display at San Francisco’s Lesbian and Gay Pride Parade. Each panel is roughly the size of a coffin – many people who died of AIDS-related causes did not get a funeral, and for many loved ones, the memorial quilt offered an alternative resting place. Today, it memorialises over 94,000 people across 48,000 individual panels – making it the largest piece of community folk art in the world.

The quilt is still growing, with sewing groups and individual quilters all creating their own tributes: the panels use all manner of creative materials, ranging from old items of clothing and deeply personal items like wedding bands, to unusual additions like rhinestones, condoms and jock-straps. Giving people a loose template in order to contribute to a larger piece has long-standing roots in protest art, and Gardner points out parallels with Extinction Rebellion’s freely-available designs, or the open-source pattern for the Pussyhat, “That structure and framework to give voice, from which to leap from, is a well-established practice,” she says.

Currently stored in a warehouse in Atlanta, the quilt is set to go back on permanent display at the National AIDS Memorial Grove in San Francisco this year – where it’ll be possible to view the enormous and affecting scale of the quilt in full. It conveys the scale and devastation of the AIDS crisis in a way that statistics never can, and the image of the quilt laid out on Washington D.C’s mall is unshakeable. “Often with these objects, there is an accretion of meaning, in that sense of becoming more meaningful through the enactment of their powers at different community meetings or protests,” says Gardner. “The object is not mute, it’s not without value and charge.”

More like this
What Is Happening With Sheku Bayoh’s Case?
By Sophie McEvoy
Windrush Victims Are Still Waiting For Compensation
By Sam Ramsden
'Line Of Duty's Writer Just Dropped A Bombshell About Steve & Kate
By Catharina Cheung
Watch The 'Heartstopper' Cast Joyfully Dance To Whitney Houston at Pride
By El Hunt
Get The Very Best Of Bustle/UK