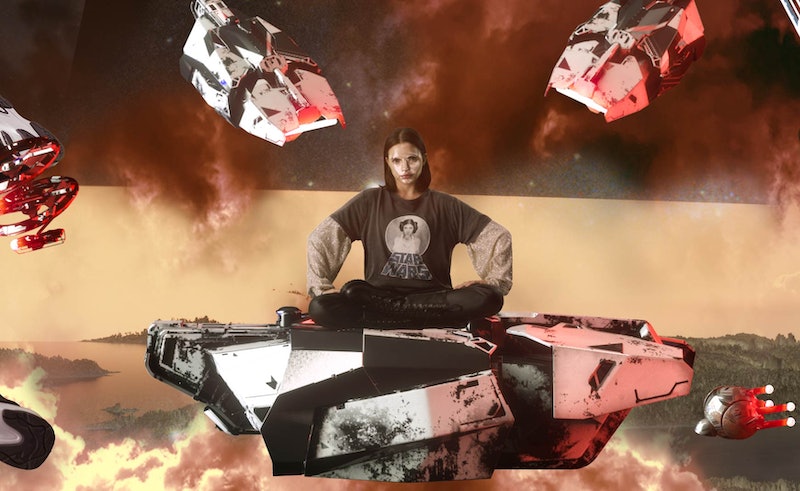 While most people are counting down the days until Christmas, Star Wars fans may have another big event in mind: the premiere of The Rise of Skywalker. The set of J.J. Abrams-helmed films is coming to a close with Episode IX, and if you're heading to the midnight premiere, Pull&Bear's Star Wars Collection has your outfit covered.

The new Star Wars-themed apparel from Pull&Bear launched on Dec. 5 at the brand's website and features sweatshirts, tees, and even accessories like backpacks all within an affordable price range. Costs begin at $17.90 for Star Wars themed boxers and don't go above $49.90 for logo printed hoodies.

While the launch of the Pull&Bear x Star Wars is meant to coincide with the release of The Rise of Skywalker, lovers of the original Mark Hamill, Carrie Fisher, and Harrison Ford led films will be just as pleased with the designs as those cheering on Finn, Rey, and Poe in the newest movies. The logos and illustrations in the collection harken back to the original trilogy with a dedicated Princess (now General) Leia tee shirt, images of droids C3PO and R2-D2, and a comic strip inspired Star Wars logo featuring flying X-Wing fighters.

Of course, for those who want to support the newest installment, there are also Episode IX-inspired pieces. Alongside the Star Wars logo items, the poster images from the new trilogy have been added to hoodies, and Rey, like Leia, has her own dedicated tee.

Pull&Bear isn't the only brand to launch a collection inspired by the classic science fiction series. The release of the new film has inspired more than just apparel. Cookware brand Le Creuset has an entire range of Star Wars themed items, and there's a famous makeup artist who is also getting in on the Star Wars love.

Iconic makeup artist and brand owner Pat McGrath has joined in to celebrate Star Wars. The artist's eponymous cosmetics brand will launch a selection of products inspired by the series including three eyeshadow palettes and four new lip balms. For US customers, though, the Pat McGrath Star Wars collection may be difficult to shop as it's a UK-based launch with Selfridges. However, according to Harper's Bazaar, there will be limited stock available to be shipped across the pond come mid-December.

No matter what Star Wars themed goods you decide to get, the number of days until the Rise of Skywalker premiere is steadily decreasing. Pull&Bear's Star Wars collection has arrived just in time to get you ready to see the final film.