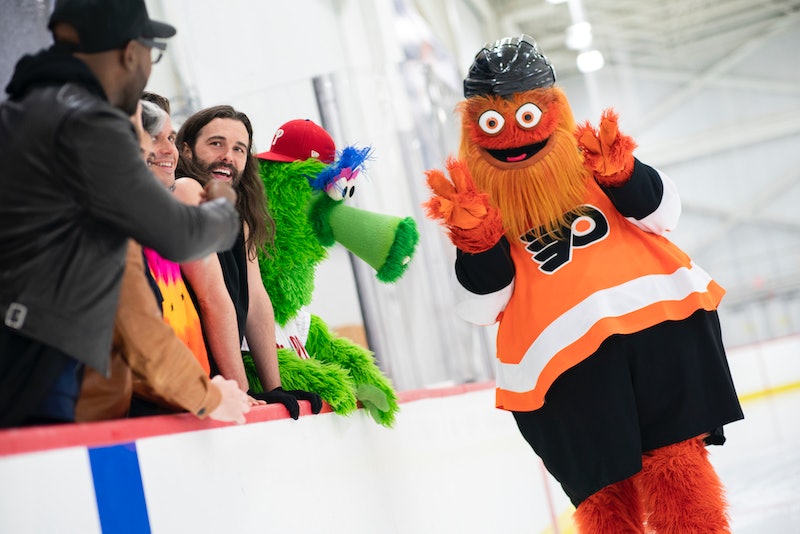 Can you believe? Netflix released a bonus episode of Queer Eye that introduces the Fab Five’s most unconventionalhero yet: Gritty, the official mascot of the Philadelphia Flyers, Philly’s ice hockey team. To celebrate Queer Eye’s fifth season in Philadelphia, Tan France, Karamo Brown, Jonathan Van Ness, Bobby Berk, and Antoni Porowski spent some time with the famous orange creature that’s known to be a little “rough around the edges” despite his furry appearance. Throughout the eight-minute mini-episode, Gritty eventually learns all about self love and embraces his uniqueness — wild googly eyes, mischievous personality and all.

Gritty was nominated by fellow mascot Phillie Phanatic, a giant green bird that represents Philadelphia's Phillies Major League Baseball team. In Phillie Phanatic’s letter to the Fab Five, the mascot admitted, “Being a mascot is tougher than most people think, and we all handle it differently, but it’s all out of love for the people of Philadelphia.” On the changes he’d like to see in his good pal Gritty, the green mascot wrote, “I don’t think Gritty needs to change a ton; maybe you guys can convince him that he doesn’t need to eat a cheesesteak for every meal — even I switch to the occasional wooder ice sometimes.” Their mission, as Van Ness so accurately states: “Let’s take this orange fluffy mess to game day best!”

In proper Queer Eye form, Gritty is then grooming his perfect eyebrows, trying on a series of outfits in the locker room (and rocking a French tuck, of course), receiving some faux fur locker room decor, and trying to incorporate food items other than Philly cheesesteaks into his diet. He'll even delve deep into overcoming the pressures and anxieties of being a mascot.

After a few seasons in Georgia and Missouri, Season 5 of Queer Eye debuted on Netflix on June 5 and featured the Fab Five in Philadelphia, Pennsylvania. The series was renewed for a sixth season in March, but production is currently halted due to the COVID-19 pandemic. While the premiere date is still up in the air, Season 6 will uproot the Fab Five from Philly to Texas.

The bonus episode comes after the Fab Five collaborated with Lizzo on a lyric video for her song “Soulmate” on June 26 to celebrate Pride. It stars France, Brown, Van Ness, Berk, Porowski, and the “Truth Hurts” rapper in cartoon form. Between Lizzo's "Soulmate" video and Netflix's Queer Eye bonus episode, it's a happy Pride, indeed.