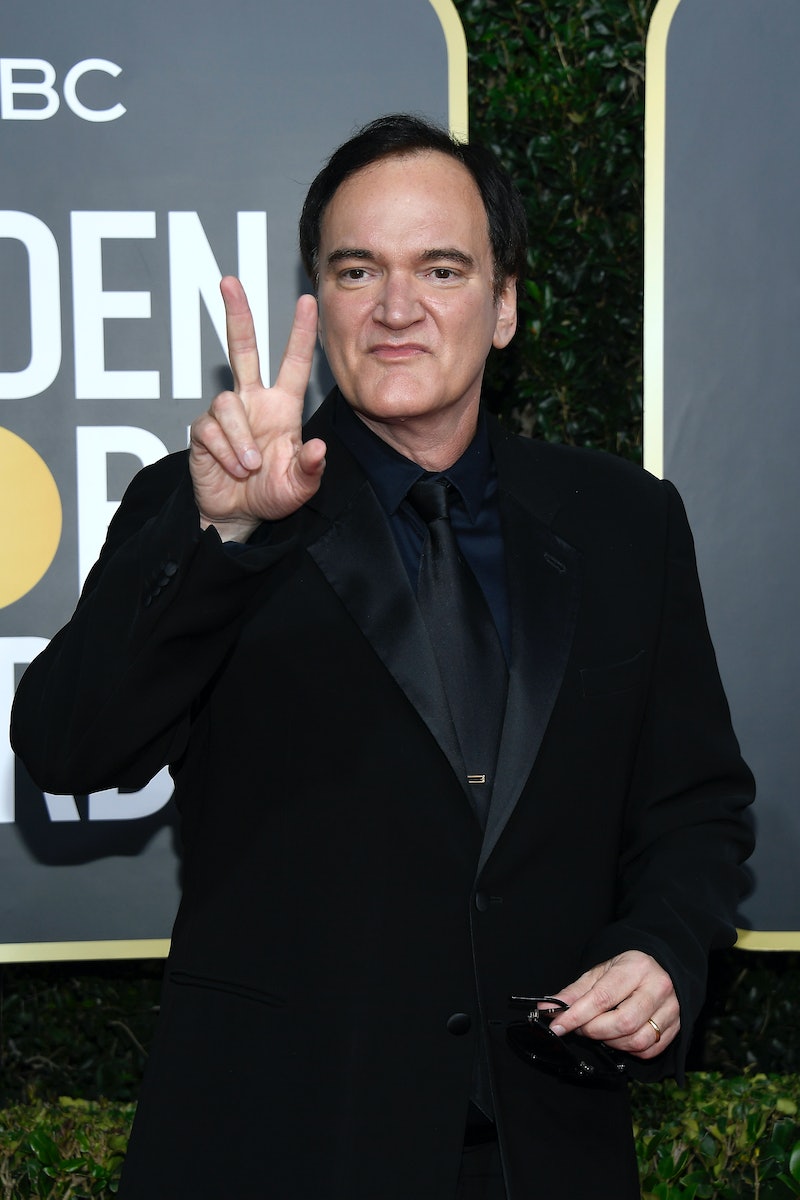 Keeping in line with his uncanny ability to make audiences cringe, Quentin Tarantino's 2020 Golden Globes speech was a master class in mansplaining and general Tarantino-ness. Accepting the award for Best Screenplay for his film Once Upon A Time In Hollywood during NBC's Jan. 5 telecast, the director gave shoutouts to "fantastic" cast members Brad Pitt, Leonardo DiCaprio, and Margot Robbie, noting that the actress, who portrayed Sharon Tate, brought "more goodness" than anyone had on any of his other movies. Even his pregnant wife, Daniella Pick, whom he noted was watching the Globes from Tel Aviv, Israel, scored a mention.

He went full Tarantino, however, when he gave a special acknowledgement to, well, himself, for tackling Once Upon a Time in Hollywood's script all on his own. "I did it," he said, congratulating himself in his rambling speech.

His film bested Noah Baumbach's Marriage Story, Anthony McCarten's The Two Popes, Steven Zaillian's The Irishman, and Bong Joon Ho and Jin Won Han's fan favorite Parasite in the category. And if you hadn't already noticed that all his fellow nominees were all men, Tarantino's approach — and tone, in general — put an unintended spotlight on that fact. Owe that, in part, to him dedicating his win to another man: "the dean of screenwriters," Robert Bolt, who penned Lawrence of Arabia, Doctor Zhivago, and A Man for All Seasons.

Not surprisingly, Twitter users had thoughts. "Tarantino just claimed his award in his all male category, by listing the lineage of his all male cinematic inspirations. Then ended by thanking his wife for being pregnant with his spawn," wrote user @StarleeKine.

Another tweeter was quick to point out his sexism. "Tarantino describing Margot Robbie’s contribution to OUATIH as "goodness" perfectly sums up how much nuance he thinks women deserve," added @MrEmilyHeller.

For @gharlesochady, it was more about the writer/director's perceived tone deafness. "Quentin Tarantino's acceptance speech was very relatable to me, as I too am a writer who can't string a sentence together out loud under even the slightest pressure," he tweeted.

At the end of the day, Tarantino should know who to thank for the criticism. As was the case with Once Upon a Time in Hollywood, he did this Globes speech all by himself.

More like this
What Is Mary J. Blige’s Net Worth? The 9-Time Grammy Winner Is Doing “Just Fine”
By Hugh McIntyre
What Is Pamela Anderson’s Net Worth? She Was Never Paid For Her Stolen Sex Tape
By Hugh McIntyre
'Boiling Point's TV Sequel Is Set To Deliver A “Rollercoaster Of Emotions”
By Catharina Cheung and Sophie McEvoy
At 28, Rosie Perez Risked Her Career To Stop Playing Stereotypes
By Gabrielle Bondi
Get Even More From Bustle — Sign Up For The Newsletter
From hair trends to relationship advice, our daily newsletter has everything you need to sound like a person who’s on TikTok, even if you aren’t.