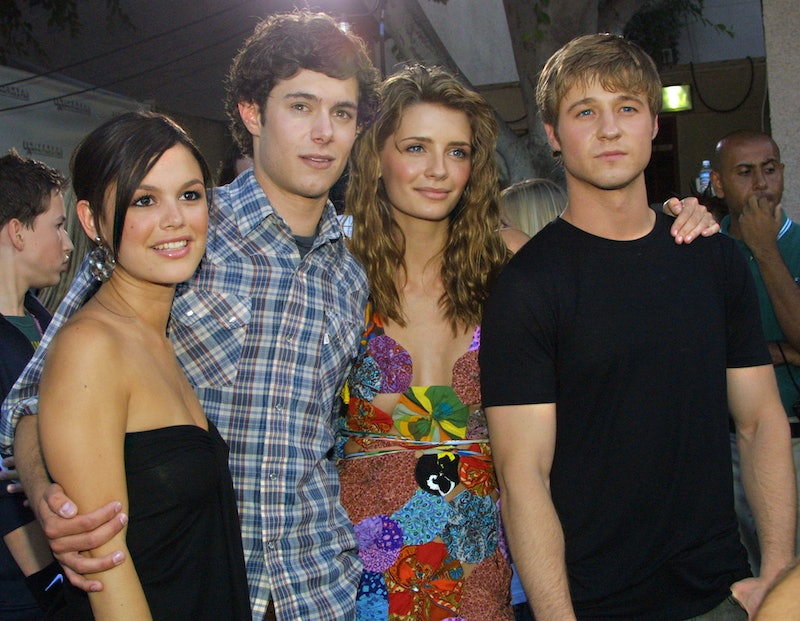 The O.C. may have ended, but Seth and Summer will forever be in our hearts — just like the actors who played them. Rachel Bilson and Adam Brody had a mini O.C. reunion on Tuesday, Aug. 13, after running into one another in the airport.

Bilson shared a photo from the adorable run-in on Instagram, joking that she "Ran into my ol buddy from jfk to lax," alongside a selfie that featured her sticking out her tongue and Brody blurrily popping into frame. Just in case O.C. fans weren't freaking out enough, Bilson also added the very appropriate hashtag, "#californiaherewecome" in reference to the show's iconic theme song. The O.C.'s creator, Josh Schwartz, also commented Bilson's photo, writing, "Sorry don’t get the reference," as a joking response to her hashtag.

But if fans are hoping that Bilson's photo might indicate that an O.C. reboot is headed to TV — after all, Schwartz's other famous teen drama Gossip Girl is being revived — Bilson has explained that she doesn't think an O.C. reunion would work. "I don't know what it would look like with our characters being old now," the actor told E! back in June 2017. "We were riding skateboards on the pier. I don't know what they do now as 30-year-olds. But it would be nice to see everybody again."

Despite her reservations about what a rebooted O.C. would entail, she did tell Entertainment Tonight a year later that she would be down to play Summer Roberts once again — but she's not sure how her former costars feel. "I mean, I would do it," Bilson told reporters in June 2018. "I'll tell you about three people that wouldn’t do it — five people? Six people? Eight people, let's be honest."

While she and her costars clearly still have a lot of love for one another, it wouldn't be surprising if the O.C. cast is hesitant to return to their characters, considering the craziness that came with starring in the biggest teen drama of the early aughts. "It was pretty crazy," Bilson told ET. "I guess I didn’t really know what to expect. I think we kind of felt like, 'Oh, this could be a special thing.' It was a weird time, but it was a lot of fun."

Brody himself said something similar back in 2014, comparing his time on The O.C. to going to college. "It was a wonderful time, but I'm significantly older," he told HuffPost Live. "I mean, maybe it's the equivalent of, like, 'Do you miss being back in college?' — which I never went to, but... there are fun things about it." Still, Brody made it clear that he's grateful for the fact that The O.C. still lives on in fans' hearts, even if he admitted that his "interests don't lie" in reviving Seth Cohen.

While Bilson and Brody's airport encounter might not inspire a more formal reunion between the O.C. stars, it is comforting to know that the actors behind Seth and Summer still have a good time hanging out together — and that, like the rest of us, they still have that Phantom Planet song stuck in their heads.