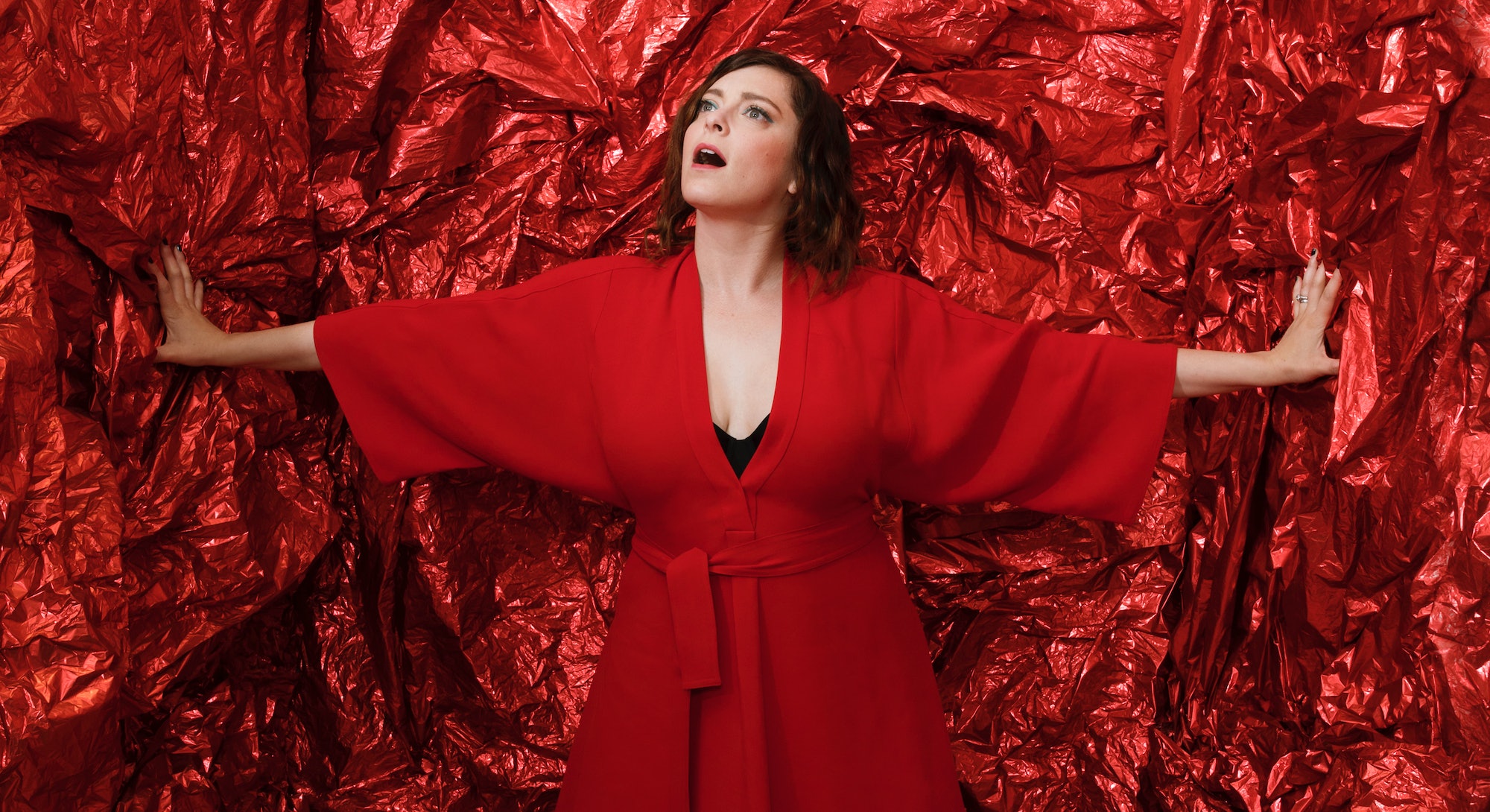 Rachel Bloom won’t sit down. We’re in a sunlit conference room at Bustle HQ, where she’s just finished posing in a giant, aluminum-lined red room while Roy Orbison classics wafted about the set. The photoshoot has ended and now it’s time to chat, but she just can’t sit still. “I’m going to be stretching as I do this,” she tells me, immediately making good on her promise with an aerobic side bend from one side to the other, like an at-home yoga workout tape on fast forward. But as unusual as this set-up is, it shouldn’t actually be all that surprising if you're a fan of Bloom.

Bloom has made a career out of doing the exact opposite of what is expected, from the title and concept of her critically beloved CW series (Crazy Ex-Girlfriend, which she co-created with showrunner Aline Brosh McKenna), to the nosedive into insanity that the series took in its Season 2 finale, to her Emmys campaign which takes aim at the bullsh*t around the yearly awards show parade itself (“Rachel Bloom Hates Award Shows”). To put it simply, Rachel Bloom is the most daring woman on television right now, so forgive me for not being shocked that she’s doing calisthenics around the room during an interview.

“I knew people would be surprised [by the finale], but in a really excited way,” says Bloom, referring to the jaw-dropping Season 2 finale of Crazy Ex-Girlfriend in which the main character, Rebecca, is left at the altar and revealed to actually be, well, a crazy ex-girlfriend — the kind who was tried for arson after actually burning down an ex’s house after he dumped her. We’re left on a literal cliff, wondering what this new revelation means for Rebecca and all the women banded together at her side. As the co-creator of the CW critical darling, Bloom has always known that this was where her character was going — and she’s been unapologetically driving Rebecca right off the deep end.

“We’ve always said that one of the models for the show was kind of Breaking Bad — that she’s a kind of bubbly Walter White … that idea, I feel, has been pretty planted, the idea that she is going to downward spiral,” she says, resolute like a parent who warned us we’d get burned if we touched the hot stovetop. “The show is called Crazy Ex-Girlfriend, it’s not called, Girl Figuring It Out, right? And Crazy Ex-Girlfriend implies that it’s going to go wrong somewhere and so the show is not going to be about her and Greg getting in a relationship and living happily ever after because the show’s not Mad About You. It’s a very specific show with a specific trajectory.”

That trajectory has Bloom standing at the end of the Season 2 finale like a woman holding a match above a haystack. And according to the actor, screenwriter, and songwriter, Season 3 will be where that match and haystack finally meet — it’s something Bloom addresses head-on, actually referring to Season 3 as being about “the idea of a crazy ex.” The situation is still a lot more nuanced than that, but for the first time in the show’s history, it’s barreling towards a word that, for many real and fictional women, has been a rather charged one.

Most feminists know that calling a woman crazy is a no-no. The history of women being told they were suffering from “hysteria” every time they expressed themselves or behaved in a way that didn’t fit the box that a patriarchal society built around them and the subsequent use throughout pop culture (including the infamous viral “Crazy Hot Matrix” video) has made sure of that. Add to that the phenomenon of gaslighting, a form of manipulation frequently aimed at women’s emotions and thoughts which drives the phrase every woman has heard her friends (and herself) repeat time and again: “Am I being crazy for thinking [insert totally valid thought or emotion]?” To call “crazy” a loaded term would be the understatement of the century.

But there’s another huge sticking point with applying the term to Crazy Ex’s heroine: Rebecca has very clearly had mental health issues throughout the series. We know that she’s had thoughts of suicide; we watch her struggle with her depression meds; we learned that she once had a mental breakdown over her stressful law career. Reducing this woman, who’s been through all these struggles, to the word “crazy” seems anything but fair. And that’s exactly why the show is calling her that, it would seem.

“Her mental state was always necessary to this show, and that’s part of the term ‘crazy,’” explains Bloom. “Well is she crazy? Is it understandable that that she’s crazy because of the pressures placed on her and her deep unhappiness? What does crazy even mean? Isn’t everyone in the show crazy?”

Like the show’s title itself, its many controversial parody songs (see: “I Love My Daughter”), and the behavior of the heroine herself, everything the series does is about deconstructing the ideas we have about relationships, love, and everything attached to those issues (including the C word).

“In any show out there, love and romantic love and obsession is kind of on this pedestal like, well that’s the purest thing and it’s like, well, no. Love is wonderful, finding the right partner is wonderful … but our obsessions stem from years and years and years, stem from our bodies telling us to reproduce,” she offers as “I’m A Believer” by the Monkees plays softly in the background. “So often the people we fall in love with are not the people we’re going to be with for the long run, they’re people who play into our pathology, and the unhealthy patterns that we’ve learned as a child. So I think, to me, that’s the most subversive thing about the show because I haven’t seen that many people make that point.”

So, this ultimate goal — this destruction of romantic love by showing what would happen if a woman behaved in the real world like so many women do in rom-coms — is essentially, what drives the character to this “crazy” moniker. And so yeah, it’s uncomfortable. The series has a way of pushing you to wonder whether or not you’re OK with what’s happening on the screen, or whether or not the words you’re hearing are acceptable. But that’s the point. You’re supposed to be wildly uncomfortable.

“It’s like when people were like, ‘Is it just me or should Rebecca really be with Greg?’ and it was like, yes, you were engineered to think that. We were controlling your mind,” says Bloom, lunging forward and grabbing at an invisible brain hovering before her.

Still, setting out to create this result doesn’t come without consequences. The series title and its parody songs haven’t really worked for everyone, and now, with the series’ decision to bear hug the word “crazy,” it would not be surprising to see grumbling popping up on social media.

Luckily, Bloom is pretty used to people missing the point — it’s been happening since the show’s title was announced, after all. “It’s taught me, personally, to never judge a movie or a tv show, or a book for that matter, to be totally trite, by its cover because you never what the actual content of it is. You never know what it’s actually going to say or what it’s actually going to deconstruct,” she says. And of course, if after all that, you’re still bristling at the title, the use of the word “crazy,” or any other label the show refuses to shy away from, Bloom’s got some sound advice. “It’s like, just watch the show you f*cking *ssh*oles.”

And while you’re probably thinking that it’s a ballsy move to woo potential viewers with a one-liner like that, you shouldn’t really be surprised. Considering the fact that this woman has been singing about period sex, a stranger’s balls, and heavy boobs on television, anything less would frankly be a little disappointing.