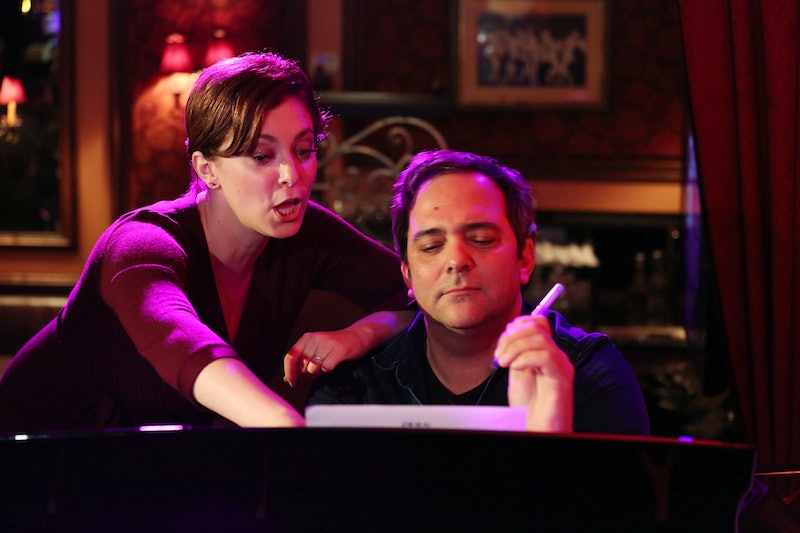 On Wednesday, April 1, news broke that Fountains of Wayne frontman and Crazy Ex-Girlfriend songwriter Adam Schlesinger passed away from complications due to COVID-19 at the age of 52. In addition to his decades-long career as an indie rock musician, Schlesinger had an impressive career as a pop songwriter and producer. And, thanks to his work on popular movies like That Thing You Do and TV shows like Crazy Ex-Girlfriend, chances are you love his work, even if you don't know it.

Shortly after the news broke, many of Schlesinger's collaborators shared tributes to the late musician on social media, praising him for his talent and genius and celebrating the many projects he contributed to over the course of his career. "There would be no Playtone without Adam Schlesinger, without his 'That Thing You Do!'" Tom Hanks wrote on Twitter, referencing the title track that Schlesinger wrote for the 1996 film. "He was a One-der. Lost him to Covid-19. Terribly sad today."

Crazy Ex-Girlfriend creators (and Schlesinger's collaborators), Aline Brosh McKenna and Rachel Bloom also shared their own tributes to the musician on social media. "Adam wrote or co-wrote 157 songs with Rachel and Jack [Dolgen] over 4 seasons," Brosh McKenna wrote on Twitter. "[He] was so funny, so kind, so opinionated, so compassionate." All of the social media tributes highlighted Schlesinger's ability to write a perfect pop song, no matter the subject or format — so, in tribute, we've complied a playlist of his best songs.

"That Thing You Do"

"I remember the day all the Oneders, Live Tyler and Tom Hanks sat in a room and played about 6 submitted tracks from different bands for 'That Thing You Do,'" Ethan Embry wrote on Twitter about the movie's endlessly catchy title track, which earned Schlesinger an Oscar nomination for Best Original Song. "When we heard Adam Schlesinger’s cassette it was instantly clear which track we would need to learn."

"Pretend To Be Nice"

While Josie and the Pussycats wasn't a commercial success when it was released back in 2001, the film's soundtrack was a massive hit thanks to its original songs like the Schlesinger-penned "Pretend To Be Nice." Over the years, the film has attained a cult-favorite status, and it's clear that the enduring popularity of the fictional band's pop-rock sound played a major role in cementing its legacy.

Despite making music for nearly a decade beforehand, Fountains of Wayne reached brand new heights of fame with the 2003 release of "Stacy's Mom," a goofy ode to hot moms everywhere. Helped along to the top of the charts by the steamy music video — which featured Rachel Hunter as the titular character and plenty of references to classic '80s comedies — "Stacy's Mom" became the band's biggest hit and even earned Fountains of Wayne two Grammy nominations in 2003.

"Way Back Into Love"

Eleven years after That Thing You Do, Schlesinger made movie magic once again by writing "Way Back Into Love" for the 2007 romantic comedy Music & Lyrics. "I don't ever feel like I'm being an actor," Schlesinger told The A.V. Club in 2007 about writing songs for movies and TV. "I mean, I'm definitely trying to imagine what that character would say, but not by putting myself in that place, so much as the way a writer would try to punch up the script or something."

"Much Worse Things To Believe In"

Schlesinger collaborated with Stephen Colbert multiple times over the course of his career, but their most memorable team-up came in 2009, when he and David Javerbaum contributed songs to Colbert's holiday special and album, A Colbert Christmas: The Greatest Gift of All! (The pair earned a 2009 Emmy nomination for this song, a duet between Colbert and Elvis Costello.) "He was a great (and patient) and talented artist with whom it was my good luck to work," Colbert wrote about Schlesinger on Twitter.

In 2008, Schlesinger and Javerbaum earned a Tony nomination for Best Musical and Best Original Score for Cry-Baby. Based on the 1990 John Waters film of the same name, the under appreciated musical is features all of Schlesinger's signatures — clever lyrics, unexpected moments of humor and deeply relatable emotions — all set to a rockabilly-inflected score.

Schlesinger contributed hundreds of songs to Crazy Ex-Girlfriend, including some of the show's most iconic moments, like the Huey Lewis-inspired "Gettin' Bi," in which Darryl (Pete Gardner) comes out as bisexual to his co-workers and friends. "Over the past few years, many people have told me that they have used "Gettin' Bi" to come out," Bloom wrote on Instagram, as part of her tribute to Schlesinger. "Well, [that song] was all Adam."

"Anti-Depressants Are So Not A Big Deal"

Schlesinger and Bloom's collaborations for the CW show earned the pair multiple Emmy nominations, but they finally won the 2019 award for Outstanding Original Music and Lyrics for "Anti-Depressants Are So Not A Big Deal," a La La Land-esque tap number about reducing the stigma around medication. "I have so much to say about [Adam] that I am at a loss for words," Bloom wrote about her longtime collaborator. "He is irreplaceable."

Schlesinger's death at the age of 52 is heartbreaking and shocking, but at least his fans have an astounding catalog of music from him, that will live on forever. Right now, a quarantine dance party in his honor seems like the perfect way to celebrate someone who wrote some of the catchiest songs in film and TV history.

More like this
The Spice Girls Just Dropped A Brand New Music Video
By Sam Ramsden
20 Years Later, Kelly Clarkson & 'American Idol' Judges Reunite For Her Hollywood Walk Of Fame Star
By Radhika Menon
The Trailer For The Whitney Houston Biopic Has Twitter Feeling Heated
By Radhika Menon
Margot Robbie Breaks Her Silence On *That* Viral 'Barbie' Moment
By Maxine Harrison
Get Even More From Bustle — Sign Up For The Newsletter