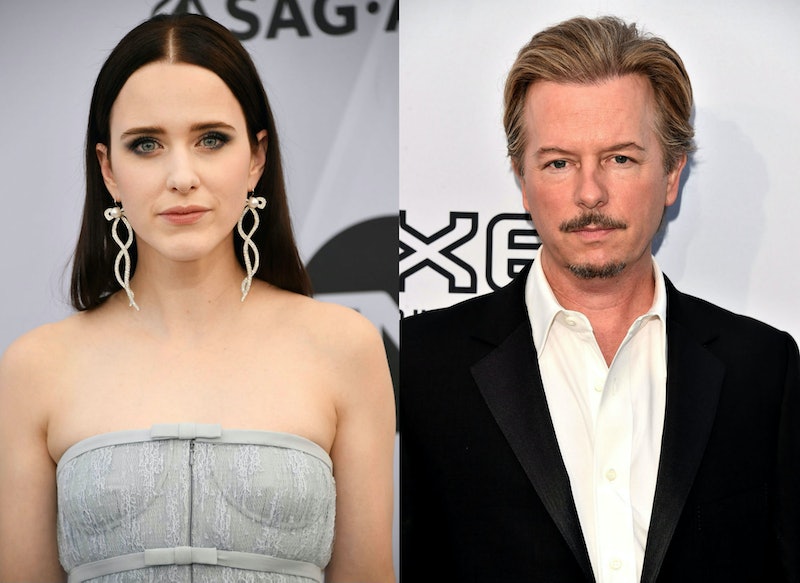 It's been one year since Kate Spade died at the age of 55. On Wednesday, June 5, Rachel Brosnahan and David Spade honored Kate Spade on Instagram with loving tributes for their late family member. Kate was Brosnahan's aunt and David's sister-in-law. Both actors took time to remember the designer in simple, yet beautiful ways.

Next to a throwback photo of Kate laughing and smiling, Brosnahan wrote, "Missing Katy B today." Meanwhile, David shared a photo of himself with Kate and captioned it with just a red heart emoji.

On June 5, 2018, the Associated Press reported that the iconic handbag and fashion designer died by suicide. Following her death, Kate's family issued the following statement:

"We are all devastated by today’s tragedy. We loved Kate dearly and will miss her terribly. We would ask that our privacy be respected as we grieve during this very difficult time."

Both David and the Marvelous Mrs. Maisel star have previously commented on Kate's passing. During a July 18, 2018 Good Morning America appearance, David remembered Kate, who was married to his brother Andy Spade until the time of her death. The former Rules of Engagement actor gave an update on how his family was coping and shared just how special of a person Kate was.

David told GMA's Robin Roberts at the time, "It’s been very tough, obviously. She really made an impact." He also said about Kate, "She was such a beautiful, lovely, great spirit that obviously will be missed."

As for Brosnahan, on June 6, 2018, she shared a touching Instagram video of her aunt dancing with her husband. She captioned the post,

"Knowing Katy, this is how she would want to be remembered She had a light that words can’t capture but touched everyone she came into contact with. She was exceedingly kind, beautifully sensitive, insanely talented, funny as heck and one of the most generous people I have ever known. She was effervescent. Hug your loved ones extra tight today."

Kate Spade New York also tweeted on June 5, "she was smart, chic, artful, witty, charming, trailblazing, gracious & so much more: kate spade inspired millions of women to stand out in a crowd. we honor the life of our visionary founder & all the joy & beauty she brought into this world. her vision inspires us every day."

Kate impacted the lives of many, especially those she was closest too. She will never be forgotten and forever be remembered as the legendary artist who brought joy through her creations.