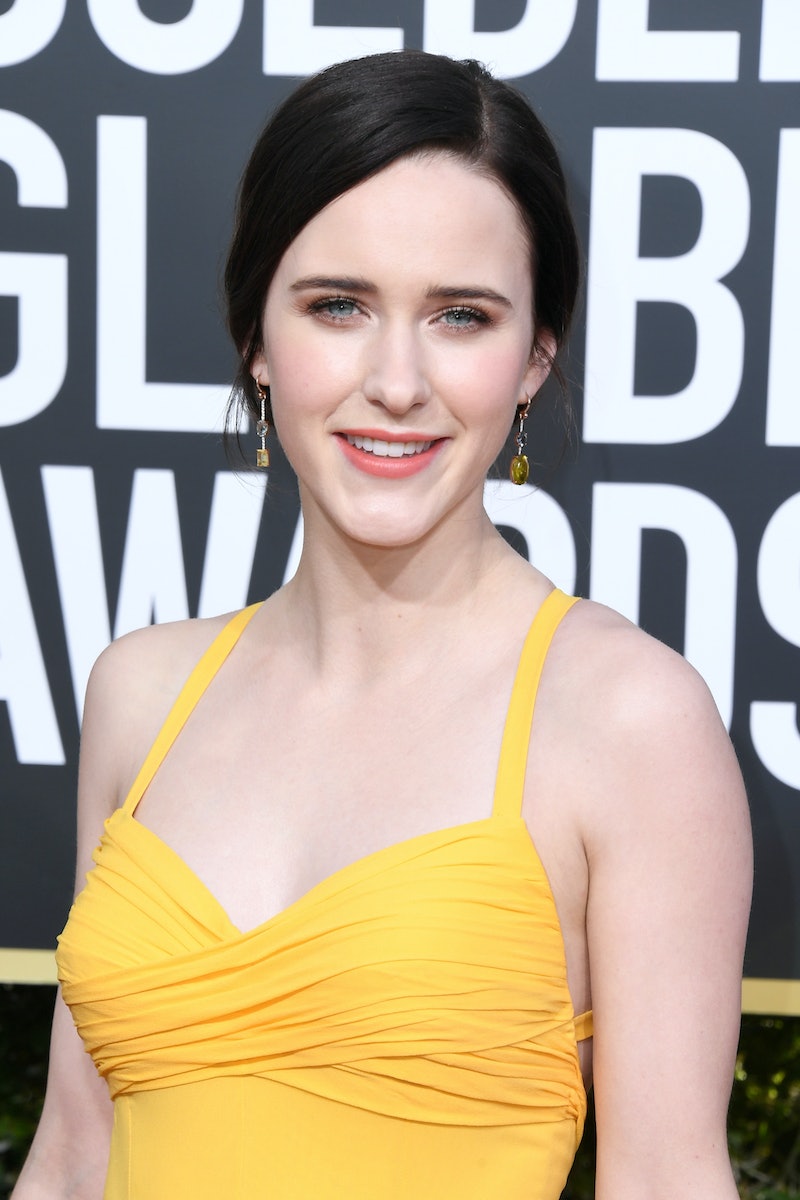 When it comes to seeing your favorite movie and television stars in the same place, no award show is better than the Golden Globes. The show honors the best of television, film — and now streaming services. And Rachel Brosnahan's 2019 Golden Globes dress probably had you so happy that your favorite streaming stars from hit series on Amazon, Hulu, and Netflix were all on the red carpet.

This year, Brosnahan won for Best Performance by an Actress in a Television Series — Comedy or Musical for her performance in The Marvelous Mrs. Maisel. But this is not an unknown honor for Brosnahan, though — this is actually the actor's second win.

Fans of Brosnahan and the show can also celebrate just how great she looked on the red carpet. Tonight, the actor wore a bold and incredible mustard yellow dress with a ruched detail bodice and thin straps, giving the look's silhouette a bit of retro vibe — harkening back to her character on the show. The back of the dress also featured a bow detail and slight train.

As for her hair, the actress wore it pulled back for the big night, away from her face, thanks to the work of hair stylist Ashley Streicher who used products by Fekkai to get the perfect look. And makeup? Brosnahan opted for a more natural look, with a muted coral lip from Charlotte Tilbury's collection, done by makeup artist Lisa Aharon. In fact, Brosnahan's entire makeup look was crafted using Charlotte Tilbury products including classic Tilbury products like her Magic Cream and Light Wonder foundation.

Brosnahan wasn't alone on the red carpet when it comes to The Marvelous Mrs. Maisel, though. The show itself was up for Best Television Series — Music or Comedy, and she was nominated alongside her co-star, the talented Alex Borstein.

The series, created by famed Gilmore Girls writer Amy Sherman-Palladino, has been a darling of the award circuit since it debuted on Amazon back in 2017. Not only did Brosnahan previously win a Golden Globe in 2017, but the series also won the award for Best TV Series, Comedy as well that year. Then, there are the Emmy Awards. The show basically took home the whole kit and caboodle with wins for Outstanding Comedy Series, acting Emmys for Brosnahan and Borstein, as well as directing and writing awards for Sherman-Paladino.

Outside of the critical acclaim of the show, there's the fact that it has racked up so many awards while being on a streaming service, not on traditional forms of cable. The Marvelous Mrs. Maisel is available to those who have Amazon Prime Video, not those with a cable subscription (unless you have both). The show isn't alone, either. Series like The Handmaid's Tale on Hulu and Ozark on Netflix all received nominations for their actors, proving that shows like The Marvelous Mrs. Maisel are certainly widening the playing field for small screen talent.

As for Brosnahan, Jan. 6 marked another night where an actor that's not from a traditional cable series took home the trophy, and looked great while doing it.