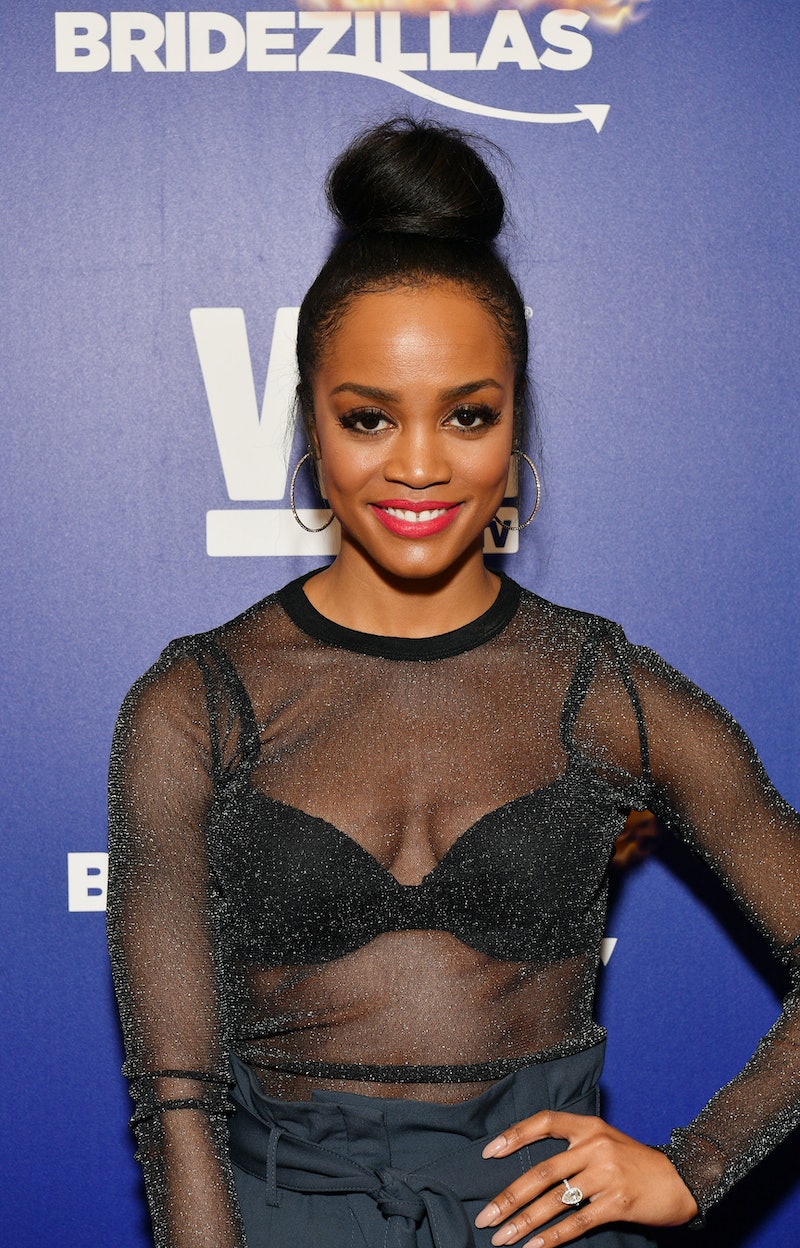 It's official: Peter Weber is the Bachelor, which is exciting news for him, but he's not getting universal support. Former Bachelorette Rachel Lindsay said Peter is a boring choice for Bachelor to Entertainment Tonight on Tuesday, Sept. 17. Rachel said, "I think Peter seems like a very nice guy. He seems lovely. This is absolutely nothing against him, but how many Peters have we seen before? What season are we on? 24. So, we’ve seen 24 Peters."

The Dallas native added, "I’m bored. And it’s nothing personal against him." It's actually not something against Peter, but it's that Rachel has been rooting for Mike Johnson all summer long. In an Aug. 6 interview with People, Rachel said, "I’m a huge proponent for Mike to be the next Bachelor." She added, "I say it anytime I get a platform to talk about it. I just feel like they haven’t had a person of color, well, they had Juan Pablo [Galavis] — they never had a black male lead before." Rachel was the first black lead in the franchise, when she starred in Season 13 of The Bachelorette in 2017.

Rachel told Entertainment Tonight, "I want to be hopeful, but when you have a contestant like Mike Johnson, who seems to check all the boxes, how is he not the Bachelor? I don’t understand." She added, "I’m sure they have some reason for not picking him, and I’m going to trust in that, but at the same time, the system isn’t working in giving us a Bachelor who is a person of color."

She's not the only one who feels this way. Plenty of fans tweeted their frustrations when Peter was selected as the Bachelor. Some fans echoed Rachel's sentiment and tweeted that Peter was "boring" and a "safe" choice. Even Bachelor alums voiced their support for Mike during the summer. Hannah weighed in on the Peter vs. Mike for Bachelor debate in a Sept. 18 interview with Entertainment Tonight. She said, "I could see either one of them being a great Bachelor ... "I feel like the people that have been doing this for years and making these decisions, make these decisions for a reason. It's not that one person's better than the other."

Clay Harbor even mentioned both of the guys in a Sept. 17 tweet about the Bachelor casting decision.

JoJo Fletcher and Jordan Rodgers wanted Mike to be the Bachelor. In a July interview with The Blast, Jordan said, "It's gotta be Mike. It's time." And then JoJo added, "It is time. He's so cute. He's so handsome. He's charming. I love him. Mike for Bachelor."

Bachelor in Paradise cast member Dylan Barbour advocated for Mike in a tweet on Aug. 22. He shared a photoshopped promotional photo of Mike holding a rose with the tagline "It's about damn time." Dylan was a fellow contestant during Hannah Brown's Bachelorette season with Mike and Peter.

Later on Sept. 18, ABC head of reality TV Robert Mills told Variety of the Bachelor choice, “I think there will be backlash and you’re always going to get backlash. I frankly can’t recall a single ‘Bachelor’ or ‘Bachelorette’ choice who was universally agreed upon ... We think Peter was the strongest option, we felt he was the guy who would give us the best 22 hours of television.”

Rachel's frustrations about The Bachelor's continuing lack of diversity in its leads is understandable and similarly echoed by franchise alums. Nevertheless, the decision has been made and Peter's season seems to be already underway.

More like this
'Bachelor' Fans Think Rachel & Clayton Are Dating After This TikTok
By Grace Wehniainen
Kaitlyn Bristowe Said Chris Harrison Ignored Her After Her 'Bachelorette' Hosting Gig
By Grace Wehniainen
Zach Addressed His "Boring Bachelor Energy" After His Group Date With Latto
By Grace Wehniainen
All The Clues Zach & Christina Are Together After 'The Bachelor'
By Grace Wehniainen
Get Even More From Bustle — Sign Up For The Newsletter
From hair trends to relationship advice, our daily newsletter has everything you need to sound like a person who’s on TikTok, even if you aren’t.