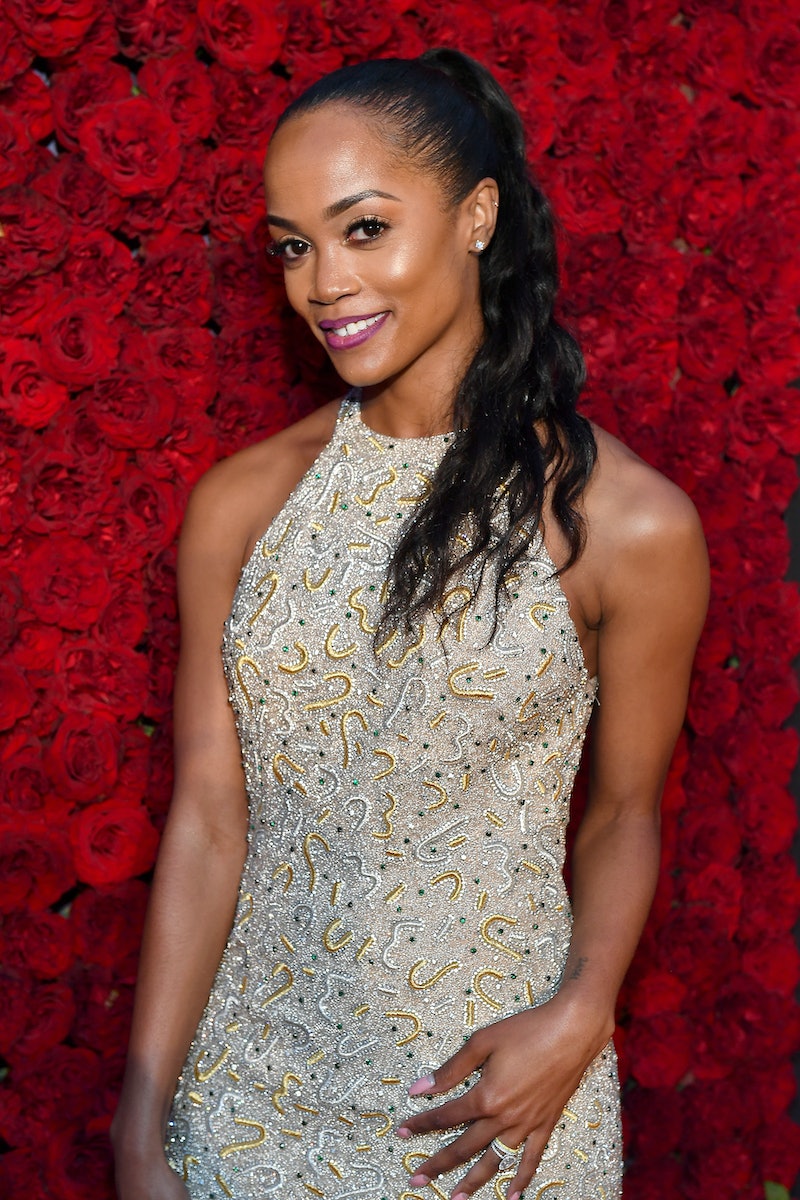 Mike Johnson may not have become the lead of the Bachelor franchise after competing for Hannah Brown's affections, but this former Bachelorette is still trying to help him land the role, one year later. During a recent interview with Entertainment Tonight, Rachel Lindsay revealed she's still rooting for Mike to be the first Black Bachelor. And beyond that, she's adamant that the reality show cast more diverse contestants going forward.

On June 8, fans of The Bachelor launched a campaign demanding ABC cast more men and women of color, beginning by casting a Black Bachelor for the first time in the show's 24-season history. Rachel — who has supported the campaign and frequently criticized the Bachelor franchise for their lack of diversity — told ET that she's been advocating for Mike to become the Bachelor since his elimination from Hannah's season. In fact, she revealed that she even questioned producers after they chose Peter Weber as the lead, despite fans rooting for the Air Force veteran instead.

"I was told there was a reason. What that reason may be, I don't know. I wasn't given a specific answer," Rachel said. Though she admitted that she didn't think Mike's race played a role in the producers' choice, Rachel continued, "I have no idea what the reason was, but they have it. I'm told they have a reason because I was definitely up in arms when I found out it wasn't going to be him."

And now that fans are advocating for a Black man to become the new lead, Rachel is "definitely still an advocate" for Mike to land that role — especially since he recently revealed that he's still single. "I feel like that post was on purpose," Rachel said, referencing Mike's recent Instagram post about him and Connor Saeli being "just a couple of bachelors."

However, if producers don't decide to choose Mike as the next lead, Rachel thinks it would be a good idea to look outside of Bachelor Nation for an eligible gentleman. "If that's what it takes, bringing somebody who's not affiliated with the franchise, I'm for that. That's what they used to do," Rachel said. "They did it with Kristian and Demi [on Bachelor in Paradise]. So, I don't have a problem with that at all." She also told producers that if they "don't feel like there's a good candidate" from a previous Bachelorette season, "then let's do whatever we need to do to have a lead of color."

Still, Rachel did admit that she understands producers' hesitancy to pick a Black man as the Bachelor. "They want to pick the closest to perfect lead of color they can, so the audience can say, 'Oh, I understand,'" she explained, adding that she feels that Black candidates are held to a different standard than their white counterparts. "They can't be mediocre. And let's be honest, we've had a lot of mediocre leads."

Despite all of her advocacy for more diversity in the Bachelor franchise, Rachel revealed that she is still hesitant to believe that the producers are planning concrete changes. "I have heard from an executive producer just saying that they hear me and they want to make changes," she explained, before adding that she has been told similar things before. "I've been affiliated with this franchise for almost four years and I hear you. But I'm not seeing any action behind those words." Maybe they should listen to Rachel's suggestions, and hopefully all of Bachelor Nation will see those changes soon.