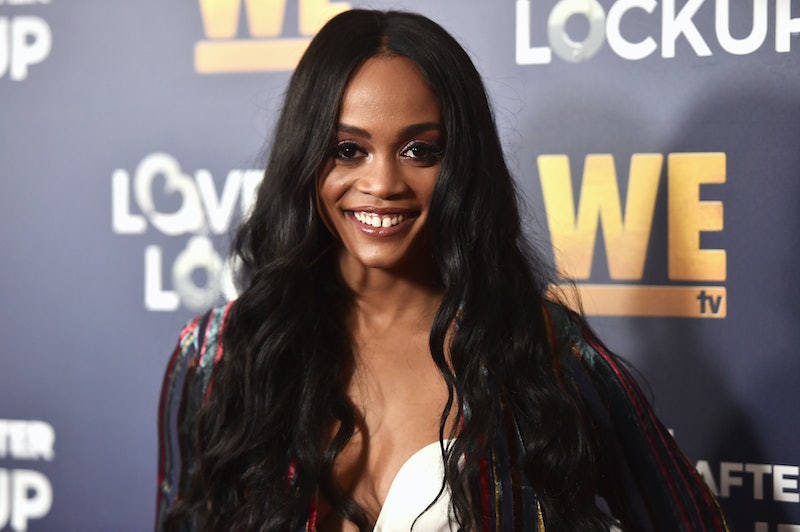 The current season of The Bachelor has been a whirlwind of drama, gossip, and tears, and no one is completely sure where it's going to end up. Usually, by this point in the season, it's pretty obvious who the respective Bachelor is likely to choose for the long haul, but this time around, the answer isn't so clear. That confusion is causing even more speculation than usual around who will win, and who will be the next Bachelorette. According to an interview with Us Weekly, former Bachelorette Rachel Lindsay has officially given her two cents on the situation, and her comments aren't what you may expect.

Lindsay is apparently just as jarred by the constant drama on this season of The Bachelor as the rest of the country, and she's not here for it. She just doesn't think any of the final three — Cassie, Hannah G., or Tayshia — are ready for the responsibility it takes to be The Bachelorette. And she knows what the position entails, considering she was The Bachelorette herself on Season 13.

"I don't think it should be anybody from this season," Lindsay, 33, told Us Weekly. She may not think anyone from this season should hand out roses on the next installment of The Bachelorette, but she does have a couple of candidates in mind for the job.

Typically, The Bachelorette is chosen from the final three or four of the most previous season of The Bachelor, although that's not a hard and fast rule. After all, there's an entire Bachelor Nation to choose from. Not all of them are single, of course, but there are still quite a few contenders.

Lindsay told the publication that she couldn't see anyone from this season being The Bachelorette, not just from the final three. Some people have rooted for fan favorite Elyse Dehlbom and even Khloé Kardashian to step up to the plate, but the former Bachelorette told Us Weekly she has a few other women in mind for the job.

She thinks the best plan of action is to "reach back and go pick somebody from another season," and particularly, to consider two of her close friends — Danielle Maltby and Kristina Schulman — who participated alongside her on Season 21 of The Bachelor. They both also appeared on Bachelor in Paradise Season 4.

"They're my friends, so it's nice!" Lindsay said of the two women. "But I say that because I actually know them in real life, and I think they're two women that people want to see find love. You've seen their hearts broken multiple times in different ways, and they've both been very outspoken about that."

Maltby and Schulman are also both older than two of Colton's final three (with the exception of Tayshia, who is 28), which has been another overarching concern in considering them for the position of The Bachelorette. Some fans don't think they're ready, like former Bachelor contestant Ashley Iaconetti. "They are so young," she told Access Live on Feb. 19. "Can we really be OK with a 23-year-old Bachelorette?"

Of course, there's no perfect age to find love, as Bekah Martinez showed Bachelor Nation during Arie Luyendyk Jr.'s season. And any one of the women from Colton's season could end up making a fantastic Bachelorette, but there's definitely arguments to be made for Lindsay's picks too. At this point, it's anyone's rose.