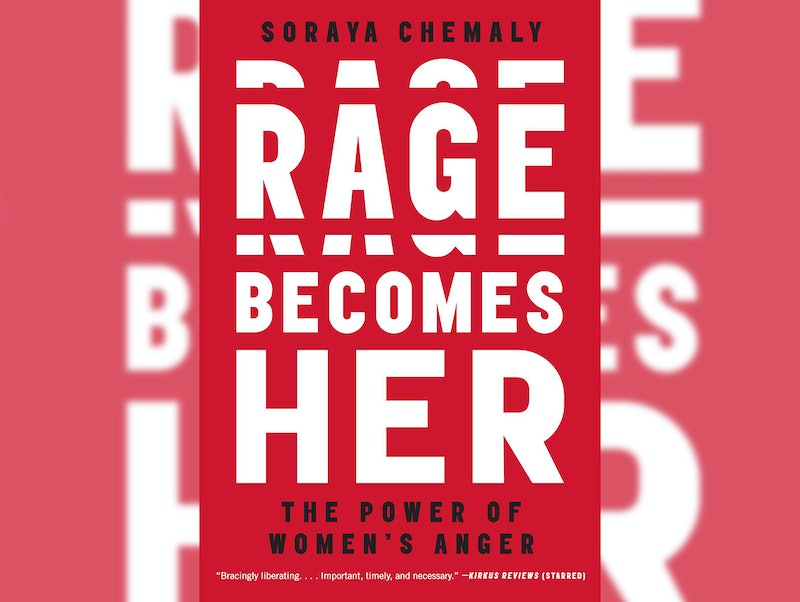 A few weeks ago, U.S. Open final in New York, professional tennis player Serena Williams was penalized with a series of what she called (and many agreed to be) “unfair” code violations by chair umpire Carlos Ramos during her losing game against Naomi Osaka. After the first, a coaching infraction, Williams was penalized for breaking her racket and, later, for calling Ramos a “thief” while disputing the violations during a changeover. Speaking to the media after the game, Williams said, “I’ve seen other men call other umpires several things." So then why was Williams penalized for what male athletes regularly get away with, and in some cases, are often commended for?

Because whether it be at work or at home, in public or in private, women — especially women of color — are not allowed to express their anger, lest they be labeled “emotional,” “irrational,” or “hysterical.” Displays of female anger can cost them their reputation, their relationships, their careers, and, in Williams’s case, $17,000. Why are men allowed, even encouraged, to be mad while women are so often punished for it? That is just one of the questions award-winning writer, activist, and Director of the Women’s Media Center Speech Project Soraya Chemaly seeks to answer in Rage Becomes Her, a provocative new book that explores women’s anger, how society seeks eliminate it, and the ways in which women are finding powerful ways to use it to fight back.

Rage Becomes Her is not a self-help book or a guide to anger management, but rather, and investigation of public understandings of anger and the very limited ways girls and women are allowed to express it. As Chemaly explains in the introduction, it is “about why girls and women saying the words ‘I am angry’ matters to us as individuals and to our society.” Because, although they are taught from a young age to keep their anger in check, to bite their tongues when they’re mad, women’s expressions of anger are vital to their own health, freedom, and well-being.

The Rage Becomes Her: The Power of Women's Anger by Soraya Chemaly, $25, Amazon

Despite the fact that women have plenty of things to be mad about — unequal pay, unfair labor practices, unreasonable and often dangerous body expectations, unchecked sexual harassment and abuse, unbridled sexism and discrimination at work and at home — anger is, as Rage Becomes Her explains, still considered a taboo emotion for women around the world. Yet, ignoring anger is bad for women, and not just because it will eventually boil over. “Unprocessed anger threads itself through our appearance, body, eating habits, and relationships, fueling low self-esteem, anxiety, depression, self-hard, and actual physical illness,” writes Chemaly.

Yet, cultural gender-role expectations keep girls and women from expressing anger, an emotion that is largely thought of as masculine, at all costs. Instead of learning how to feel anger, like Elsa from Frozen, girls and women are told to conceal it at all costs. It is only when women are in private, away from their places of employment, public spaces, and personal relationships, that they are allowed to feel and show how mad they really are. If they do show flashes of anger in public, they are often heavily criticized, and in many cases, punished, as is evident in Williams’s U.S. Open penalties and the public backlash that followed.

“When women are asked why they continue to associate being angry with negative outcomes and fear, they say it is because they do not want to ‘lose control’ and act in ‘inappropriate’ ways,” writes Chemaly. “This desire not to be disliked or seen as crazy, irrational, or dangerous, masks the lack of control we already live with as a result of silencing, sublimating, denying, and social opprobrium.”

In Rage Becomes Her, Chemaly uses scientific research, in-depth interviews, and personal experiences to investigate why cultures around the world expect and even force women to keep their anger silent and their rage hidden. But more than that, she makes a case for why that pattern finally needs to be broken.

“What does separating anger from femininity mean for us as women?” Chemaly asks. “For one thing, it means we render women’s anger ineffective as a personal or collective public resource. This treatment of women’s anger is a powerful regulation; and ideal way to reduce women’s pushback against their own inequality.” Because, according to Chemaly, women’s anger is one of the most powerful tools for creating lasting change. Anger is useful, a signifier that women take themselves and their plight seriously. That is what makes it one of the biggest threats to the patriarchy, and perhaps the reason Western cultures continue to demand women bite their tongues, keep their anger under control and away from the public.

But women aren’t keeping their anger a secret anymore. "It is not just a coincidence that we are at an uncomfortable strategic inflection point for the rights of girls and women just as we face grave threats to democratic values and the health of the planet,” Chemaly writes in this thoughtful and utterly eye-opening book. “One cannot be separated from the other. This is an era of angry women and women willing to make noise.”

Trust me when I say, after reading Rage Becomes Her, you will be more than willing to make noise, too.