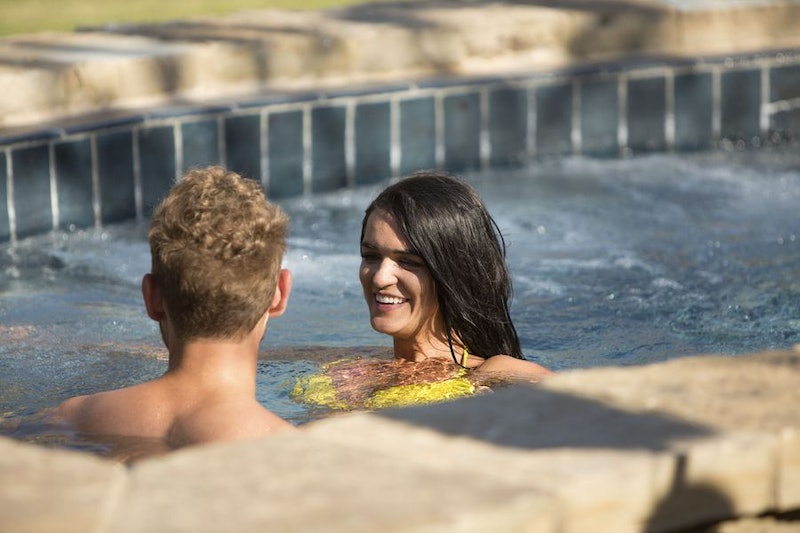 After Nick Viall broke up with Raven Gates on The Bachelor, fans of the Arkansas native were happy to hear during After the Final Rose that Gates would be on Bachelor in Paradise. But with Bachelor in Paradise being postponed due to allegations of misconduct, Gates may not be getting her second chance at love on national television, Yet, Gates' Twitter makes it seem like she's less upset about that and more upset for the two people involved in the Bachelor in Paradise allegations. But that doesn't mean her comments on the situation have been without drama.

Earlier: On June 11, ABC announced that the filming of Bachelor in Paradise was being postponed due to "allegations of misconduct." The original statement from Warner Bros. to The Hollywood Reporter read:

Since then, reports have alleged that DeMario Jackson of Rachel Lindsay's season of The Bachelorette may have had a nonconsensual sexual encounter with Corinne Olympios, who was on Viall's season of The Bachelor with Gates. TMZ reported that sources close to Olympios claim that she was too drunk to give consent to Jackson during a sexual encounter in the pool and that she allegedly blames the Bachelor in Paradise producers for not intervening. TMZ also reported that sources close to Jackson claimed that there was a sexual encounter, but also claimed that things between Jackson and Olympios were fine the next day. These sources did not speak about consent being an issue. It's also been reported that a producer for the show alleged filed a complaint regarding the alleged incident. Bustle has reached out to both Jackson and Olympios for comment, but has not received a response.

Although Gates kept her tweet about the state of Bachelor in Paradise fairly simple, writing that she was "heartbroken," she has also been responding to tweets from fellow Twitter users, including critical statements claiming she is only concerned for herself:

Despite the backlash, Gates has stayed the course of saying her being heartbroken didn't come from a selfish place and that she's concerned for both parties involved in the allegations.

Gates seems to preaching that no one judge what happened until all the facts are gathered. Neither Jackson nor Olympios have spoken publicly, and the investigation is still underway.