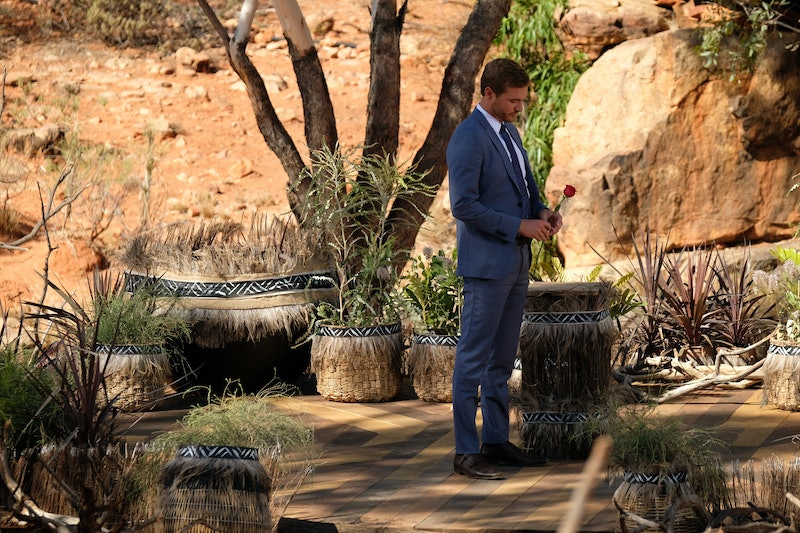 Being a member of Bachelor Nation requires a tacit understanding of many things: the differences between "seeing myself someday falling in love," "falling in love," and "being in love" with someone; the Revolve Instagram influencer industrial complex; a begrudging respect for the word "journey;" the list goes on. But one essential rule of Bachelor Nation — thou must not take Chris Harrison's hyperbolic promises of "the most dramatic finale ever" as serious proclamations — threatened to come true on Tuesday night, as Peter's live Bachelor finale spun out in various different directions.

From the moment Peter was announced as the Bachelor, both he and host Chris Harrison have been cryptically teasing his season as virtually unspoilable for mysterious reasons they couldn't reveal. They weren't wrong: Even famed Bachelor spoiler extraordinare Steve Carbone, aka Reality Steve, struggled to officially confirm many of the details of what went down this season until the eleventh hour.

Now that Peter has let his final rose winner Hannah Ann give back her engagement ring, runner-up Madison is allegedly dating Peter despite his mother Barb's now-infamous objections, and the dust is beginning to settle, Bustle checked in with Reality Steve to reflect on the frustrations and thrills of Peter's allegedly unspoilable Bachelor season.

On what surprised him most about the live finale:

"Barb, for sure, [and] her anger over something that happened three and a half months ago. Look, I don’t think any of us think that Madi and Peter have a chance of making it. She is way more spiritual than him and always will be, and I just don’t think he’s ever going to fit that mold of what she’s looking for in a man. But I also don’t think that Barb needed to eviscerate a 23-year-old girl on national television and embarrass her son in the process — that was disgusting. Why do that to your son? Why not just say this is going to be tough, they have a lot of obstacles, but he’s my son and I love him and support him in whatever he does?"

On production's hand in this season:

"Production has a hand in every single thing. Nothing on this show happens organically. Just the way everything played out this season — what Peter was saying pre-season about how it wasn’t gonna be spoiled and there’s a reason for it — I don’t believe anything I saw [in the finale]. Nothing."

"[ABC] hates everything I do — publicly, at least. Privately, they love it."

On the most frustrating part of trying to spoil this season:

"I almost kind of enjoyed the fact that I kind of didn’t know the ending or who [Peter] ended up with for most of the season. But the annoying aspect was constantly being asked all season long, ‘Who did Peter pick?’ ‘Why aren’t you telling us?’ ‘Oh, you’re just holding out,’ or ‘ABC paid you,’ — it’s just an ignorant take; it doesn’t make any sense. This is a company that sued me twice. I’m not doing business with them, trust me. They hate me. They hate everything I do — publicly, at least. Privately, they love it."

On how he vets his sources:

"It’s about a five question process that I go through with everybody who tells me something. It’s like OK, how do you know this? And when they tell me how they know this, [I ask], is that part credible? It’s not just that someone tells me something and I run with it — I think back in the day, I did."

On who to look out for on Clare's season...

"The first guy that jumps out is Matt James, because he’s Tyler Cameron’s best friend. He’s the one guy everyone kind of already knows going into this. They’ve seen him [on Instagram]. I don’t know much about him except that he’s Tyler’s roommate, but he’s got his sh*t together, he’s a good looking guy — but he’s also 12 years younger than Clare, as are most of these guys."

... and the drawbacks (and likely drama) of the rest of her men:

"There’s already built-in drama with the fact that you already have so many [cast members] in their 20s, and you know the guys in their 30s are gonna be like, 'Clare, this guy is not here for you,' and they’ll still be 7, 8, 9 years younger than her — these [other] guys are just 11 or 12 years younger.

I don’t understand the thought process with casting, where only 9 of the 32 guys they released [publicly] are 30 or older. It doesn’t seem like that’s enough. I know Clare tends to date younger, however, I don’t think 11-12 years younger. This looks like a cast that was made for a Madi or a Hannah Ann, and they just decided to go with Clare for god knows what reason. I’m a fan of Clare's — she’s been on my podcast twice, I love her to death. But I don’t know why they didn’t change up the casting. It doesn’t make any sense to me."

On what he's hoping for in Clare's season:

"I’d hate to see another broken engagement. I really do hope she finds someone. On the show, it’s been proven the Bachelorettes’ relationships absolutely last longer than the relationships in the Bachelor world, so for a woman who’s gonna be 39 in less than 2 weeks, I really hope it does work out for her. Because if it’s just a bunch of screw-ups wanting to be Instagram influencers who go down to Paradise, you’re [wasting] a good year of her dating life at 39 years."

More like this
Zach Reveals The Chaotic 30 Minutes That Were Cut From ‘The Bachelor’ Premiere
By Grace Wehniainen
'Bling Empire: New York’ Star Dorothy Wang Wants To Try 'The Simple Life'
By Alyssa Lapid
At 28, Rosie Perez Risked Her Career To Stop Playing Stereotypes
By Gabrielle Bondi
At 28, Debra Jo Rupp Was Living A Much Different '70s Show
By Grace Wehniainen
Get Even More From Bustle — Sign Up For The Newsletter
From hair trends to relationship advice, our daily newsletter has everything you need to sound like a person who’s on TikTok, even if you aren’t.