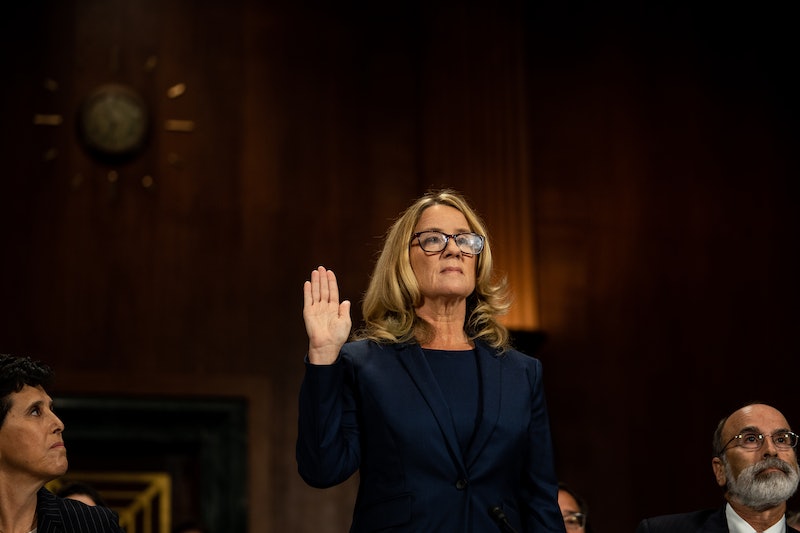 When I speak to New York Times bestselling author Rebecca Traister, we’re just over 24 hours away from hearing Dr. Christine Blasey Ford’s testimony before the Senate Judiciary Committee. I’m mad. Traister is mad. It seems, at times, like the entire country is mad, though certainly not for all the same reasons. That anger — the roiling, relentless rage that is all too familiar to American women, those who have been angry for generations as well as those just waking up to it — is the topic of Traister’s most recent book, Good and Mad: The Revolutionary Power of Women's Anger.

“I am horrified, worried, and aware of the very real structural losses that are going to be incurred,” Traister tells me when I ask her about the testimony of Dr. Ford.

“I think it’s entirely likely that Brett Kavanaugh will be confirmed, and if he’s not, that Donald Trump will nominate another justice that will do the work of passing restrictive, hurtful laws that disempower vulnerable populations," she adds. "Those kinds of decisions will make things worse over the course of our lifetime. It will make worse the structural realities of the United States."

Good and Mad was written before Dr. Ford’s allegations against Kavanaugh became public, but in the book Traister references the disturbingly similar testimony Anita Hill presented before the Senate Judiciary Committee in 1991 about her sexual harassment allegations against then-Supreme Court nominee, Clarence Thomas. It is just one of the seemingly hundreds of references to the power of women’s rage — both historical and contemporary — that Traister explores in her book. With October marking the one-year anniversary of the revival of the #metoo Movement, there’s no better time to read it.

Good and Mad: The Revolutionary Power of Women's Anger by Rebecca Traister, $27, Amazon

Traister opens Good and Mad by setting the scene of the 1972 Democratic National Convention, where civil rights and feminist activist Florynce Kennedy is furious that the black, female Democratic candidate for president, Shirley Chisholm, has received no television or mainstream press coverage. From there, Traister segues directly into Hillary Clinton’s devastating loss, which felt “a world away” from the 1972 Convention. Until, clobberingly, it didn’t.

“In the United States, we have never been taught how noncompliant, insistent, furious women have shaped our history and our present, our activism and our art. We should be,” Traister writes.

Good and Mad charts centuries and generations of women’s anger: the suffrage movement; the Labor Movement; the movements for civil, women’s, and gay rights; the Black Lives Matter movement, the activism around better gun control, the founding and subsequent revival of #metoo, and more. It explores women’s rage and resentment, who is allowed to be angry and who isn’t, and who decides how women’s anger is received and interpreted.

From there, Traister segues directly into Hillary Clinton’s devastating and rage-fueling loss, which felt “a world away” from the 1972 Convention. Until, clobberingly, it didn’t.

“[Our current anger] is very much in line with the anger of the past,” Traister tells me. “The work we’re doing now is tied directly to the work that was done in 2006 by Tarana Burke; in 1991 by Anita Hill; in the 1960s and ‘70s by the civil rights, women’s rights, and gay rights movements, [and] the work that was done by the Labor Movement of the 20th century.”

But she also notes the distinctions. “The fact that there are repercussions, that is new,” Traister says. In Good and Mad, she writes about the flood of allegations against Harvey Weinstein. “We certainly have had other eras when we shared stories of harassment or assault in large numbers — but we haven’t seen anything like the #metoo Movement, the contemporary hashtag movement that has resulted in powerful men losing their jobs.”

But she also notes the distinctions. “The fact that there are repercussions, that is new,” Traister says.

Traister notes the fact that many of the women who came forward against Weinstein, at least in the initial round of reporting, were privileged, healthy, successful white women. “We don’t have a real precedent for high-profile women,” she says. “They’ve kind of won at white patriarchy. And they still have their story of assault and abuse — stories they felt compelled to tell.” If these women — who by great measure have succeeded in hostile terrain; who appear to have acquired, so-called, it all — have their own stories of subjugation and abuse and silencing, then maybe the rest of us need not discount our own experiences any longer either.

That reading Good and Mad made me good and mad myself would be an understatement. In addition to writing about the activating force of women’s rage, Traister also made me aware of the ways I’ve directly participated in white patriarchy and the ways I’ve been compliant in both my own subjugation and the subjugation of others. It made me aware of the instances wherein I’ve said yes because I didn’t know I was allowed to say no, and enlightened me to the things I didn’t know I was allowed to be angry about, as well as the perks — socially, academically, financially — of that compliance. It’s one thing to be furious at men for their participation in patriarchal structures, but it is a whole other thing to be furious at other women and at ourselves for our own participation.

“I think it’s part of the honest examination of how these systems work,” Traister says. “This is some tricky shit. This system is built to entrap us. Of course we’re complicit. But when we pick apart a system we ask: how does this work? How does power replicate itself, and protect itself, and cover for itself, and perpetuate further accrual of power? You’re looking at very ingeniously designed structures of power. And we’re engaged. We’re dependent on some of those structures. We’ve participated in enforcing them and reinforcing them, not just in regards to how we wind up complicit in our own subjugation, but how we wind up complicit in other people’s subjugation.”

“This is some tricky shit. This system is built to entrap us. Of course we’re complicit."

Traister uses Good and Mad to ask tough questions about divisions within feminist movements as well, acknowledging the history of those divisions and the ways dissent within feminist movements still exists today. Alicia Garza, one of the founders of Black Lives Matter, is a key figure in Good and Mad. Traister quotes Garza discussing the “messy” nature of activist movements and the internal divisions that existed and exist for practically every movement throughout history. “The question for us is: are we prepared to try and be the first movement in history that works through that anger?” Garza says in the book.

“It’s incumbent upon us that we have the hard conversations about racial exclusions and divisions and inequalities within a women’s movement, both contemporary and historical, and to make that a part of the movement going forward,” Traister says, when I ask her about this. “Can there be coalitions formed where inequality has taken tolls between allies and has divided allies? That’s a crucial question of my book and I don’t really know the answer. This is one of the projects that the contemporary generation of women are undertaking: can the resentments and frustrations between allies, that are valid and real — the racism, classism, and white supremacy within the women’s movement — be worked through together or are those divisions and angers enough to divide a coalition in a way that is irreparable? And that’s a question that the book seeks to explore, but I don’t think there’s an answer. I think the future tells us what the answer is.”

Good and Mad is a book that illuminates rage, advocates for rage, makes some sense of rage, and explores why women have been encouraged to repress and silence their rage for so long. It looks at the ways both men and women respond to female rage — embracing, criticizing, discounting, mocking, caricaturizing it. It looks at rage as not the end, but the means to the end. It is the thing women must recognize and accept and claw our way through in order to discover what world waits for us on the other side of that anger.

In Good and Mad, Traister quotes feminist English columnist and author Laurie Penny, in a section about the backlash to women's rage: “This was always how the counter-narrative was going to unfold: it was always going to become a meltdown about castrating feminist hellcats whipping up their followers into a Cybelian frenzy… We know what happens when women get out of control, don’t we?”

“Yes,” Traister writes. “That’s when we change the world.”