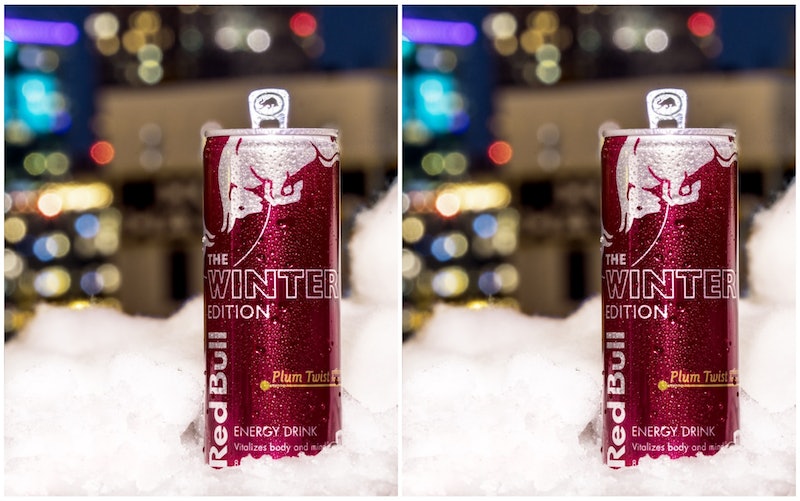 I’ll admit that I’m not a huge Red Bull fan — but I do find its newly-released seasonal variety fascinating: Red Bull Winter Edition Plum Twist has arrived for the 2018 holiday season, ready to help you “fuel gift wrapping session, marathon cooking for family feats, and long days hitting the slopes,” according to a press release. Flavored with the taste of plum and cinnamon, the drink is available now through Jan. 31, 2019 — so if you’ve been looking for a slightly unexpected way to perk yourself up over the holidays, a new option just landed in your lap.

Red Bull first announced its Editions series in 2012. Packaged in brightly colored cans, the new varieties of the energy drink marked the first time the company had made any changes to its signature taste. Initially offered in only three flavors — Red Bull Red Edition, with the taste of cranberry; blueberry-flavored Red Bull Blue Edition; and Red Bull Silver Edition, meant to taste like lime — the Editions line has since expanded to nine flavors, in addition to the original, sugar-free, and “Total Zero” varieties.

One of those nine flavors is, of course, the Winter Edition of the drink. I do have to give Red Bull credit for coming up with an… uh… let’s call it off-the-beaten-path winter flavor for this drink. Rather than sticking with seasonal mainstays like, say, peppermint or cranberry, they’ve gone with “the smooth taste of plum and cinnamon,” as the press release puts it. That explains the drink’s full name; technically speaking, it’s not just Red Bull Winter Edition — it’s Red Bull Winter Edition Plum Twist. (I assume the cinnamon is the twist.) The flavor actually put in an appearance in Canada last year, but this year, the United States gets the chance to try it out, as well.

Now, it’s worth noting — as we did when looking at Starbucks’ Sugar Plum Cheese Danish — that a traditional sugar plum is actually not a plum; it’s a hard candy. As such, any plum-flavored holiday specialty that claims to be “sugar plum-flavored” isn’t quite accurate. Of course, Red Bull doesn’t say whether the choice to go with plum as a tasting note has anything to with sugar plums — but in just case you were thinking that holiday-related “visions of sugar plums” had anything to do with the flavor, know that if it does, it’s slightly off in its interpretation of the term.

In any event, though, Red Bull Winter Edition Plum Twist definitely falls on the fruitier end of the taste spectrum, according to those who have tried it. YouTubers Birdew Toy & Food Reviews, who somehow managed to get a hold of the stuff in Australia (bless the internet), noted in a video review that it tasted almost like cherry; meanwhile, the blog What I Drink At Work described it as “[starting] off like a cream soda,” but with a “moderately fruity sour twist” arriving shortly after the first ip. A short review posted by a user of the social media platform Steemit also said that although it was “unorthodox,” it was also “delicious and pleasant,” with “a good mix of a light fruitiness and a slight spice.”

You can even dress the drink up a bit, if you like. A suggested mocktail from Red Bull itself involves pouring Red Bull Winter Edition Plum Twist over orange slices and ice and topping it off with sparkling water; you could also make yourself a wintery, holiday-esque version of a Red Bull and vodka by either including a splash of the hard stuff or just swapping it in for the sparkling water wholesale.

Red Bull Winter Edition Plum Twist is available at retailers now through Jan. 31, 2019 (or while supplies last — it is a limited edition, after all) in single-serve, 12-ounce cans; it’s also apparently available at bars and restaurants in 8.4-ounce cans. For the curious, an 8.4-ounce can of Red Bull has about 80 mg of caffeine — roughly the same amount as a cup of coffee.