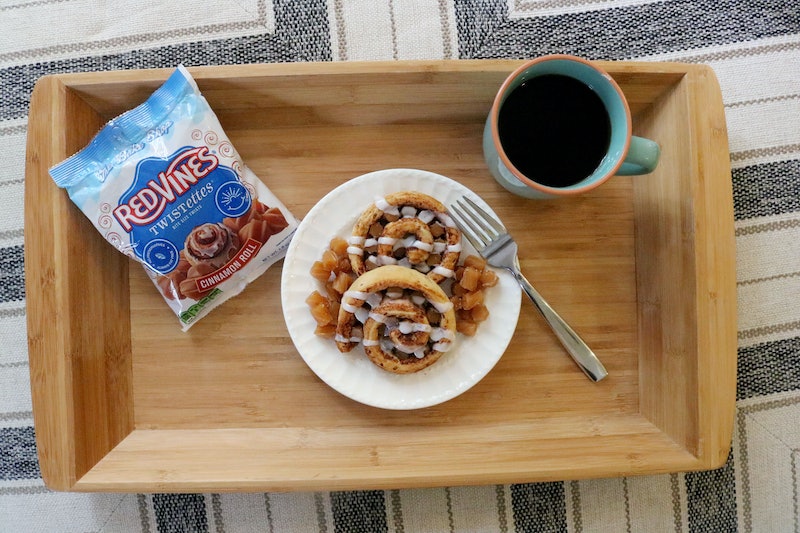 I’ll confess that I wasn’t really a Red Vines kid when I was growing up; maybe I can be forgiven for that fact, though, given that I grew up on the opposite side of the country from where the American Licorice Company is headquartered. I’m making up for lost time now, though, because Red Vines Twistettes Bake Shop Flavors have arrived, and, well… I just can’t resist a sweet masquerading as another sweet. Red Vines Birthday Cake Twistettes and Red Vines Cinnamon Roll Twistettes aim to bring the taste of the bakery to you conveyed through bite-sized, chewy little Red Vine nuggets — and my sense is that folks who are already fans of Red Vines in general are probably going to dig these options quite a bit.

You might already be familiar with the Birthday Cake flavor; it first made its way to shelves during the spring of 2017, appearing on snack food sites like The Impulsive Buy. The Cinnamon Roll ones, however, are new; in fact, they’re so new they aren’t even in stores yet. They made their debut at the Sweets and Snacks Expo at the end of May (the same place that Unicorn Magic Pudding galloped onto the scene), and have since been gracing the pages of snack food Instagrammers left and right.

They also recently graced my mailbox courtesy of Red Vines, so hey, guess what? I can now tell you exactly what both the Birthday Cake and Cinnamon Roll Twistette flavors taste like. And believe you me: They are… surprising.

Let’s start with what’s already available: The Birthday Cake option, which can be purchased right now via Amazon. (They’re $29.45 for a 12-pack of 4.8-ounce bags and $39.02 for a 12-pack of bigger, eight-ounce bags.) When you open the bag, it’s like getting blasted with the scent of canned vanilla frosting. Seriously — as soon as I cracked the seal on the bag, the immediate area surrounding me was suddenly filled with the aroma of a thousand childhood birthday parties. And you know what? As much as I love a good homemade buttercream or cream cheese frosting… there’s a time and a place for the canned stuff, too. Ah, memories.

The Twistette pieces themselves resemble cake decorating sprinkles that were caught in the blast radius of Wayne Szalinski’s growth ray in Honey, I Blew Up The Kid. They’re brightly colored nibblets cast in yellow, pink, and blue; however, they’re not hollow, so know that when you bite into one, you’re going to get something a little more solid than a standard Red Vine twist.

But the million dollar question, of course, is this: Do they actually taste like birthday cake? The answer is… kind of. They taste more like frosting than actual cake; however, I’d argue that they actually taste more like marshmallow than anything else. It’s possible that I might just feel that way from the combination of frosting scent and bouncy mouthfeel; it doesn’t feel like cake when you’re eating them, so I think my brain might just be identifying the flavor based on what it does feel like: It’s chewy and kind of vanilla-y, so I get marshmallow from that. That may just be me, though — but it’s definitely a different experience than Red Vines Original’s flavor is.

And then we have the Cinnamon Roll Twistettes. Many Instagrammers who had a chance to try them at the Sweets and Snacks Expo gave them a favorable review; noted Markie Devo, “the cinnamon/sugary taste gives off a pure cinnamon roll vibe, [which] along with the chewiness make these pretty amazing," while Junk Food Mom reported they had a “softer, almost sticky texture” with a “mild and enjoyable” cinnamon flavor. Did my own experience with them live up to the hype? Actually… yeah. It did.

As with the Birthday Cake Twistettes, opening a bag of Cinnamon Roll Twistettes fires off a scent cannon into your face; this time, though, it’s a blast of extremely strong, extremely sweet cinnamon. The pieces aren’t as showy as their Birthday Cake brethren, consisting of only a single shade, rather than a whole rainbow — but then again, if my cinnamon rolls were rainbow-colored, I might be… concerned about them. Instead, these nibblets are a mellow caramel color — which, y’know, makes sense for a cinnamon roll-inspired treat.

I won’t lie, though: I was extremely surprised to find that they actually do taste very much like cinnamon rolls. If you don’t like cinnamon or very sweet treats, these will probably not be for you; if you’re into both of those things, though, boy, have I got a treat for you. According to the packaging, the Cinnamon Roll Twistettes are meant to “deliver that perfect blend of cinnamon and frosting, all in a perfect, bit-sized treat!” — and remarkably, I really do get the sense of both cinnamon and frosting from these things. Like, that’s what the mouthfeel inspires. I don’t know how they did it, but it’s really something else.

Again, Cinnamon Roll Twistettes aren’t available to buy just yet; they’ll be arriving soon, though—and when they do, guess what? There is another recipe on the Red Vines website that incorporates these little sweets waiting just for you.

That recipe is a recipe for cinnamon rolls with Cinnamon Roll Twisttes rolled up inside.

It’s Inception, cinnamon roll-style. We have to go deeper.

Anyhoo, be on the lookout for Cinnamon Roll Twistettes soon; if you’re more into the whole Birthday Cake thing, those are available now. Happy snacking!