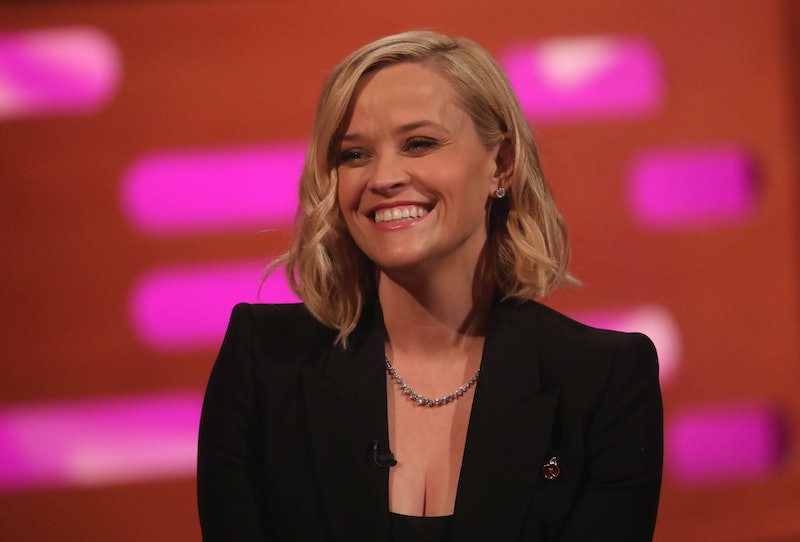 If you're a fan of Elle Woods (and I mean, who isn't?), Reese Witherspoon is about to make you very jealous. According to an interview on The Graham Norton Show, Reese Witherspoon got to keep every piece of her wardrobe from Legally Blonde. Yes, everything.

On Nov. 1, Witherspoon appeared on the show with her The Morning Show co-star Jennifer Aniston to discuss the new Apple+ series. The conversation, however, turned to what the actors had been able to take from the sets of some of their most iconic roles. For Aniston, it was the neon coffee cup that hung in Central Perk on Friends. For Witherspoon, well, it was a lot more than just set decor.

After Aniston explains her item, host Graham Norton turns to Witherspoon and tells the audience that the actor "walked away with more than most" from the set of Legally Blonde 2. Turns out, that Witherspoon kept her entire wardrobe, including 77 pairs of Jimmy Choo shoes.

Understandably, Aniston looks to Witherspoon and exclaims, "You did?" Witherspoon then explains that keeping her wardrobe was actually written into her contract. Now, that's what you call quality contract negotiation.

Plus, the actor still has every pair of shoes and each ensemble to this day. She reveals that she's "never touched" the pieces, but on the 15th anniversary of the film, she took them out of storage, tried them all on, and showed the pieces to her daughter.

Witherspoon's Legally Blonde wardrobe is likely one of the most iconic in recent film history. Her character Elle Woods' feminine, ultra-pink wardrobe often led to those around her underestimating her abilities, but as everyone knows by now, the fictional Harvard Law student was not to be underestimated. As for real life, Witherspoon's character has gone on to be called a feminist hero, and the film itself has been cited as a feminist romance all about loving yourself.

The films and their wardrobes have also had an obvious impact on pop culture. Last week, Kim Kardashian West debuted her Elle Woods Halloween costumes to the delight of fans. The current law student went full steam ahead with the looks, recreating Woods' Harvard admissions video essay from the film and posting it to her Instagram.

Like Kardashian West, singer Ariana Grande has also taken inspiration from Witherspoon's iconic role. In her music video for "Thank U, Next," Grande recreates several scenes from the first film including the famous Bend and Snap and Woods' arrival at Harvard.

While fans, famous or not, are able to relive Witherspoon's iconic role by watching the films, all the actor has to do is head to her closet.