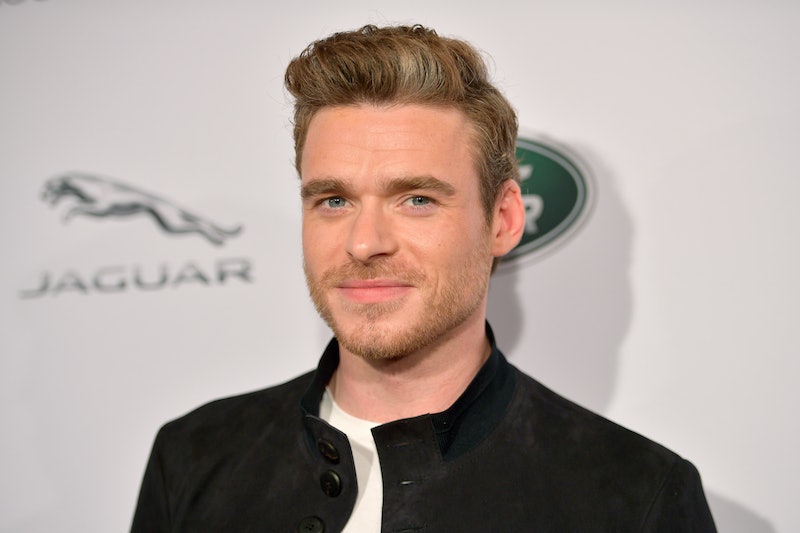 There are dark days ahead for Jon Snow and Theon Greyjoy in Game of Thrones Season 8, but their late brother in arms, Robb Stark, is reminding them of simpler days — via Instagram of all places. Richard Madden's Game of Thrones throwback photo will take you all the way back to those early days at Winterfell. Taken just after the first table read of the pilot, the photo features baby-faced versions of The Bodyguard actor, Kit Harington, and Alfie Allen seemingly enjoying The Wheel of Belfast. Basically, it's adorable, and it will make you weep for the sweet summer children they once were.

Madden captioned the photo, "#TBT This is Kit, Alfie and I after our first read through of S1 Ep1 of 'Game of Thrones' about 10 years ago. KIDZ." And yes, they do all look like babies in the picture, but some things never change — like Harington's perfect brood face. Seeing the actors 10 years ago, before they had any idea that Game of Thrones would be a global phenomenon, is a touching reminder of just how far they've all come.

For Madden, Harington, and Allen — as well as many of their fellow actors like Sophie Turner, Emilia Clarke, and Maisie Williams — Game of Thrones not only represents their breakout roles, but also their formative years. Viewers have watched them grow up onscreen, but it's still easy to forget just how young they all were when the series started. For example, all three of the actors in the photo were around the age of 22 when they filmed the pilot. Much like Jon Snow, they knew nothing about the level of fame that they would go on to achieve.

If looking at Ned Stark's sons (biological and surrogate) all together makes you emotional, then know you're not alone. Plenty of celebrity fans are crying over how precious the trio is in the comments on Madden's photo. Modern Family actor Sarah Hyland commented, "Oh my god" with the crying emoji, while their co-star John Bradley West simply wrote "Legends" with a heart. Even Ibiza director Alex Richanbach couldn't get over how young they all look. "This is insane," he commented.

All the other celebrities thinking about posting throwback photos this week might as well go home, because Madden has won this round. His photo is the perfect reminder of just how adorable this reluctant trio was in the pilot, and how much pain was waiting for them in the episodes to follow. Thankfully, things have been much brighter for the actors who have done amazing stuff like win a Golden Globe (Madden), marry Rose Leslie (Harington), and welcome a daughter into the world (Allen).

There's no telling where Season 8 will take Jon and Theon, and poor Robb bowed out way back in Season 3 at the Red Wedding, but it's clear that off-screen these guys have been on an amazing journey together. And seeing them at the start of their adventure is just like going back to the beginning of Game of Thrones all over again.

More like this
Emilia Clarke Shares More Details About The New 'Game Of Thrones' Series
By Maxine Harrison
At 14, Jenny Han Wrote Rom-Coms About Her Friends & Fan Mail To Leo DiCaprio
By Alyssa Lapid
Natalia Dyer Opened Up About Steve & Nancy’s “Lovely” ‘Stranger Things’ 4 Dynamic
By Grace Wehniainen
The 'Stranger Things' Writers Revealed 2 Tragic Unscripted Finale Moments
By Grace Wehniainen
Get Even More From Bustle — Sign Up For The Newsletter