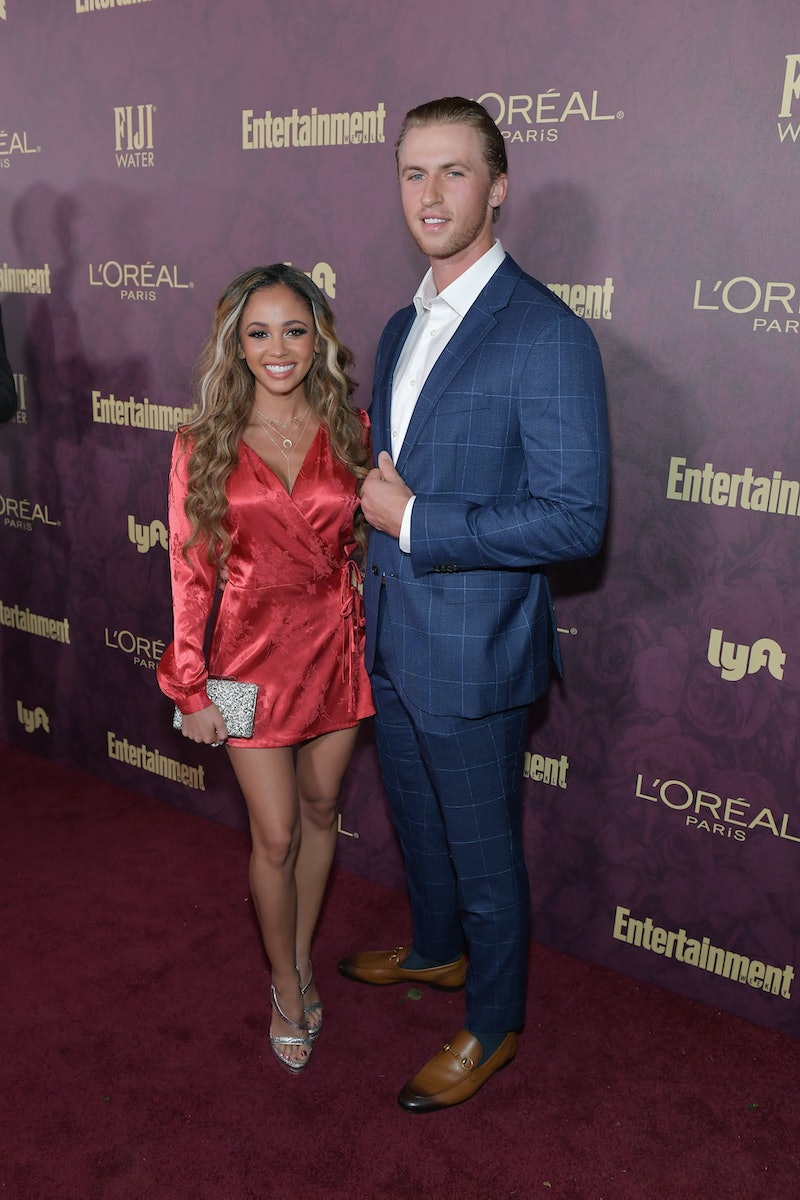 While you may be a Toni and Cheryl shipper on Riverdale, in real life, Vanessa Morgan who portrays Toni Topaz on the show has another boo. The actor has been dating White Sox pitches Michael Kopeck for about a year. Now, though, Riverdale's Vanessa Morgan is engaged, and you've got to see the massive ring.

On the Fourth of July, Morgan took to her Instagram account to announce that she and Kopeck are officially engaged. For the holiday, the pair appear to have taken a camping trip to Mooney Falls in Arizona according to Morgan's Instagram stories. The Riverdale actress has been showcasing the gorgeous scenery of the Grand Canyon as well as documenting she and Kopeck's vacation together on social media.

Then, a few days after their trip first began, both Morgan and Kopeck confirmed the engagement with respective posts to their Instagram feeds. In a photo showing Kopeck proposing in front of a stunning waterfall, Vanessa wrote, "My Forever," with a crying face, a ring, and a black heart emoji. As for Kopeck, the baseball player posted a video of the moment he proposed in front of the gorgeous waterfall as well as a long message detailing his love for Morgan.

While all of this is super sweet, you've also got to see Vanessa Morgan's engagement ring.

In a follow-up post from her original photo, Morgan showcased a much closer view of her engagement ring, and it's certainly one for the books.

The ring appears to be a solitaire, pear-shaped diamond with a simple band. In a comment posted by one of Morgan's followers, the actor is asked if the ring is rose gold, and Morgan gave a few details about the massive new piece of jewelry. According to Morgan's response, the ring is actually white gold, and it's her "dream ring." As for the band, she went on to say that it will eventually be switched out for all diamonds because the original band wasn't ready for she and Kopeck's trip.

Soon after announcing the news, Morgan's co-stars began congratulating the Riverdale star. Madelaine Petsch, who plays Morgan's love interest Cheryl Blossom, commented, "Omggggg dying for this post...bestie’s getting married !!!!!!! I’m beyond happy for you my little babies." Petsch was joined by Cami Mendes, Charles Melton, and Lili Reinhart who also all offered their own congratulations to their co-star and friend.

While Morgan is a recognizable name and face thanks to her acting work, Kopeck may actually be familiar to some people outside of the sports world. Before dating Morgan, Kopek appeared on the Bravo reality series Tardy for the Party. At the time, the baseball player was dating Real Housewives of Atlanta star Kim Zolciak Biermann's daughter, Brielle, and appeared on episodes of the family's spinoff series.

Obviously so soon after an engagement, Morgan hasn't revealed any wedding plans, but the two certainly seem to be having the time of their lives while in Arizona. For now, Morgan's just got plenty of time to stare at that gorgeous engagement ring.

More like this
Vanessa Hudgens Is Reportedly Engaged To Cole Tucker
By Jake Viswanath
This 'One Tree Hill' Wardrobe Error Is Going Viral On TikTok
By Brad Witter
Hailey Bieber Looks Just Like Princess Diana & I Need To Copy Her ASAP
By Sophie McEvoy
30 Of Kendall Jenner’s Best Runway Looks To Date
By Dominique Norman
Get Even More From Bustle — Sign Up For The Newsletter
From hair trends to relationship advice, our daily newsletter has everything you need to sound like a person who’s on TikTok, even if you aren’t.