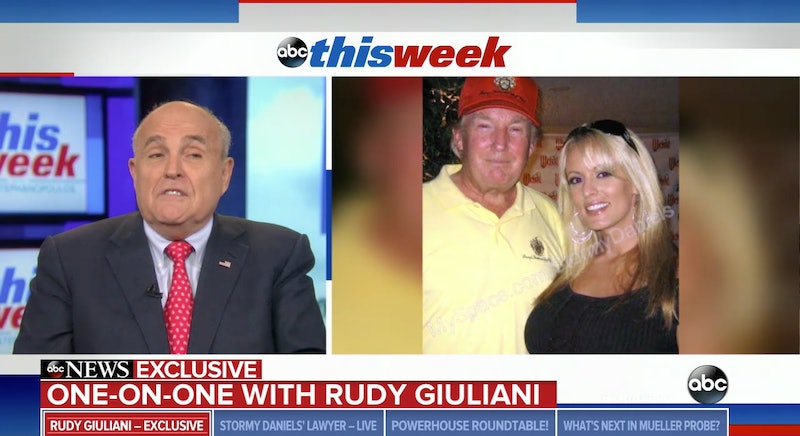 In an interview with ABC, Rudy Giuliani suggested Michael Cohen's payment to Stormy Daniels in 2016 might not have been the only one made on behalf of Donald Trump. Giuliani, who only recently joined the president's legal team, insisted that similar payments were normal for someone of his client's stature. In other words, he's implying Cohen could've paid other women to keep quiet about relationships with Trump.

In an interview with George Stephanopoulos on ABC's The Week, Giuliani said he wasn't aware of any other payments similar to the one made to Daniels, whose real name is Stephanie Clifford. But, he did acknowledge that other payments might exist.

"I have no knowledge of that but ... I would think if it was necessary, yes," Giuliani told Stephanopoulos.

This revelation is just the latest in Giuliani's television appearances. Last week, the former mayor of New York told Fox News' Sean Hannity that Trump personally reimbursed Cohen for the $130,000 payment to Daniels. "The president repaid it," Giuliani confirmed to a surprised Hannity.

Giuliani issued a statement on Friday afternoon to clarify his interview with Hannity:

First: There is no campaign violation. The payment was made to resolve a personal and false allegation in order to protect the president's family. It would have been done in any event, whether [Trump] was a candidate or not.

Cohen has maintained that "neither the Trump Organization nor the Trump campaign was a party to the transaction with Ms. Clifford, and neither reimbursed me for the payment, either directly or indirectly,” according to The Washington Post.

Daniels claims that she and Trump had sex in 2006, which the president denies. But during the 2016 presidential election, Cohen paid Daniels $130,000 as hush money — a non-disclosure agreement reportedly meant to keep her quiet about the encounter.

While Giuliani raised the possibility of other potential hush payments on behalf of the president, he also suggested that the $130,000 payment made to Daniels is not enough money to be considered a real payment.

In the Sunday morning interview, Giuliani also made sure to let Stephanopoulos know that he does not have all the facts. "My issue is getting up to speed on the facts here. I’m about halfway there," Giuliani said.

Giuliani's apparent lack of understanding about the facts of the payment is a sentiment argued by the president as well. " Rudy is a great guy, but he just started a day ago," Trump said on Friday. "He started yesterday. ... He'll get his facts straight."