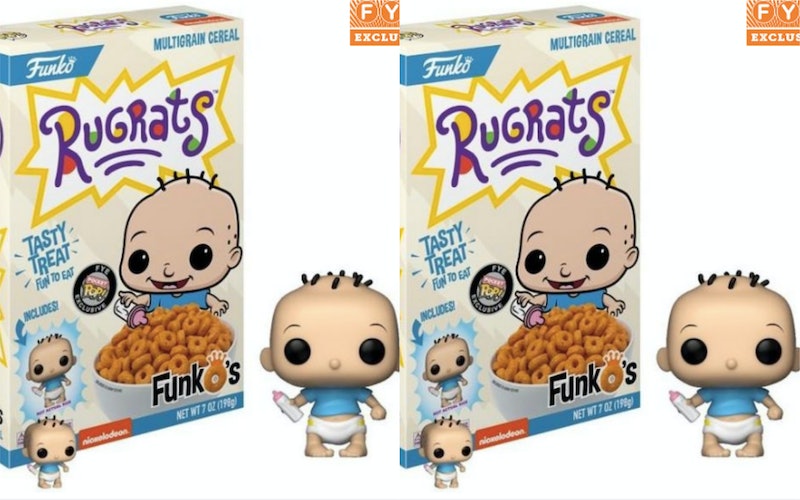 If you used to start every morning as a child with an amazing boost of Rugrats, you can now do it all over again as an adult. No, not by watching the adorable TV show on Nickelodeon (I wish), but with your breakfast cereal. That's right, if you really want a little nostalgia in the morning, there is now a Rugrats cereal that can you get started. The cereal is made by Funko, a company that seems to specialize in all things nostalgia — toys, food, and more.

You can get the multi-grain cereal from FYE, where it's currently on sale for $12.99. If you're a really big fan, there's a limit of four boxes per customer, but if you really need more than four boxes of Rugrats cereal, then you may need to think about some bigger priorities. It's also available at Walmart, although the current price tag there sets it at an eye-watering $29.99, which seems like a lot of money for a multi-grain cereal, no matter how deliciously nostalgic it might be.

Probably the most important feature of the cereal is that the 7 oz box comes with a Tommy Pickles figurine. The figurine is dressed in the same blue shirt, diaper, and bottle that you remember but, for some reason, comes with the addition of haunting black eyes that will remind you that your existence on this earth is only temporary. So there's that. The few random hairs escaping from his head are definitely a nice touch, as well.

It's also nice to see the warm glow of the traditional Nickelodeon logo on the bottom of the box. But if the Rugrats aren't your thing yet you're just desperate to have a cereal that gives you a little more kick in the morning, Funko also seems to make cereal for Harley Quinn lovers, Skeletor lovers, the Joker lovers, and more.

If multigrain cereal just doesn't trip your trigger, fear not — for 2019 looks to be a breakfast cereal promise-land. Perhaps the most important addition to the cereal scene is Pop-Tarts cereal in the two most delicious and holy of Pop-Tarts flavors, Frosted Strawberry and Frosted Brown Sugar Cinnamon. There have also been rumors of a Sour Patch Kids cereal that should be making a splash later in 2019 and Peeps cereal has already landed on shelves just in time for your Easter bunny to arrive. Oh, and that's before we even get into the fact that Chicken and Waffles cereal is now a thing. So if you're a cereal enthusiast then you may want to keep your eyes out for what blessings ye olde cereal gods will sprinkle on us in the coming months. Here's to lots and lots of morning sugar coming our way.

Having a multi-grain cereal might not instantly transport you back to those carefree days of watching Rugrats and living your best life, but it may just be a place to start. And if that dead-eyed Tommy Pickles doll scares you in the night, just remember: I did warn you.