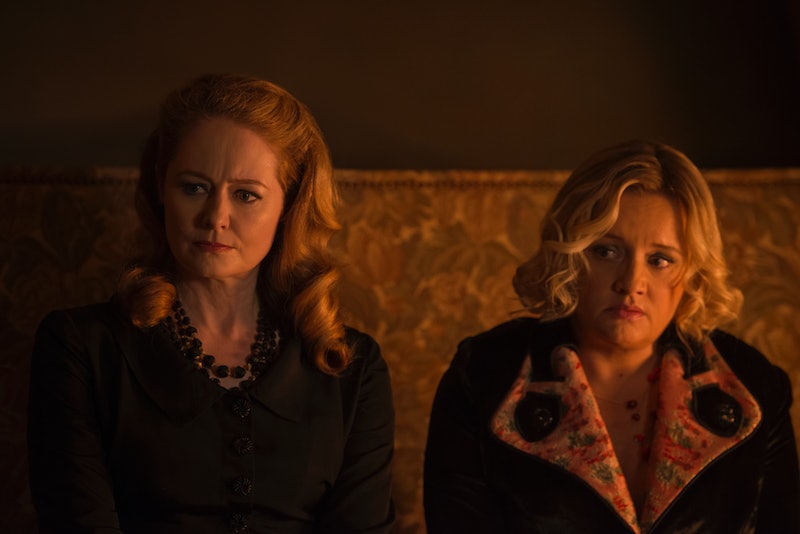 Fans tend to have very strong feelings about their favorite shows being remade — just ask anyone who starred in the The Office. They had to handle years of comparisons between the NBC sitcom and the original, UK version. But The Chilling Adventures of Sabrina star Lucy Davis revealed she took a cue from Steve Carell when it came time for the actors to prepare for their respective remakes.

In an interview with Vulture, Davis, who starred on the UK version of The Office back in 2001 (she played Dawn, the original Pam), explained that she purposefully avoided watching Sabrina, the Teenage Witch while preparing to play Aunt Hilda on the new Netflix series — a strategy that she noted Carell also employed before playing Michael Scott on the US version of The Office. "I didn’t revisit it for the purposes of the role," she said. "Actually, I remember reading that Steve Carell hadn’t seen The Office when he auditioned, and he then made the choice not to see it. I think it’s why when you work with remaking the original, you have to work with bringing something new to it."

"I feel like people do compare [remakes and originals] and sometimes it’s a bit unnecessary. You don’t have to compare one thing to the other thing," Davis said. In fact, she embraced the remake of her own show, adding, "I personally love the U.S. Office. I know some of it by heart. It’s been a huge joy."

Still Davis admits that she's not too concerned about The Chilling Adventures of Sabrina being compared to the Melissa Joan Hart-starring sitcom: "I think the original Sabrina and our Sabrina are so wildly different that isn’t a comparison between them, but I totally get it. I can’t speak on behalf of the people who played the original role — they’ve just been pleasant and kind and I was really moved by the people who played my part in the original."

From the looks of things, the cast of Sabrina the Teenage Witch are too excited about the new show to bother comparing things; the cast, including Hart, Nate Richert, Caroline Rhea and Beth Broderick — who played Sabrina, Harvey, Aunt Hilda and Aunt Zelda, respectively — sent the new cast their "best witches" in an adorable video on Twitter ahead of the Chilling Adventures of Sabrina premiere on Oct. 26.

In addition to earning the original cast's blessing, the Netflix series' much darker interpretation of the Spellman family and the residents of Greendale is so vastly different from the sitcom that it's hard to imagine fans will find much to compare at all. For example, while the Hilda and Zelda of the original Sabrina were supportive and loving sisters with opposite personalities, the new interpretation gives the sisters a much more "toxic" relationship, according to Davis. And that's just one of many changes.

Sabrina, the Teenage Witch fans can see all of those differences for themselves by treating themselves to a Halloween marathon of The Chilling Adventures of Sabrina - if they dare.

More like this
Netflix Reveals First Look At Wednesday In The 'Addams Family' Spinoff Series
By Bustle Editors
24 Years Ago, 'Friends' Dropped Its Most Underrated Ross & Rachel Episode
By Grace Wehniainen
What Is 'Pretty Wild' Star Tess Taylor Up To Now?
By Morgan Leigh Davies
12 ’90s Movie References You Missed In 'Do Revenge'
By Radhika Menon
Get Even More From Bustle — Sign Up For The Newsletter