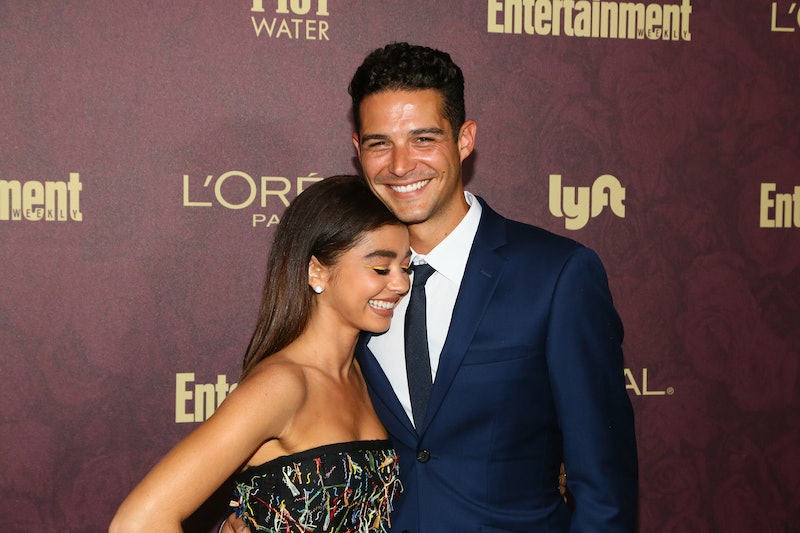 If you're a Bachelor Nation fan, it's almost impossible not to root for Sarah Hyland and Wells Adams' relationship — they seem to be so in love, and after watching Adams' journey on The Bachelorette and Bachelor in Paradise, it's awesome to see him finally living happily ever after. But could these two be walking down the aisle already? In a comment she made on Instagram recently, Hyland hinted she wants to marry Adams soon, and it's enough to get anyone who's been rooting for this couple excited for their future.

The comment came when Hyland's friend and fellow actor, Matthew Daddario, celebrated his first wedding anniversary with wife Esther Kim, and Kim took to Instagram to share one of the photos from their big day to mark the occasion. Hyland then took the opportunity to make a very telling comment on the post. "Next marriage is me ok???” Hyland wrote, according to Us Weekly.

Being that Hyland and Adams have been together for more than a year, it's not surprising to find out that they might be considering marriage in the future. But her comment does make it seem like things are heading in a very serious direction for them, which is definitely exciting to think about.

It's also important to remember that these two have been tackling the serious stuff together since the very beginning. In fact, in an interview with SELF last month, Hyland revealed that Adams supported her through her second kidney transplant, despite the fact that it happened just three days after they met in person for the first time. She told the magazine:

“It was a really intimate start to a relationship to have to go through those hurdles at the very, very, very beginning when you're just even getting to know a person. Also, falling in love with someone before you can really be intimate. I did not believe that that was a thing, but it is.”

Getting a start like that to their relationship obviously kicked things into gear faster than if they'd just been casually seeing each other, but it seems to be working for them. And back in August, they even moved in together, so marriage seems to be the next logical step.

They've also never been shy about sharing their relationship with fans on social media, so it's no surprise that Hyland doesn't mind if people see the comment and know that she might want to marry her boyfriend. Case in point: When they spent the holidays together and Adams posted their amazing A Christmas Story costumes:

Ultimately, where Adams and Hyland's relationship goes in the future is (obviously) up to them, but it's kind of fun to imagine them tying the knot someday. Maybe Chris Harrison would like to officiate? He's made it clear that he's always down to lend his services to members of Bachelor Nation when the time comes.

For now, though, fans will have to be satisfied with watching Adams and Hyland's adventures as an unmarried couple. Following along with their relationship has been so much fun so far, and seems like it will only get better from here.

More like this
When Was 'Bling Empire' Season 2 Filmed?
By Alyssa Lapid
20 Photos From The 'Stranger Things' Season 4 Premiere To Make You Feel Old
By Alyssa Lapid
Kourtney & Travis Crashed His Daughter’s TikTok Live In Their 2nd Wedding Outfits
By Grace Wehniainen
Everything To Know About 'RHONJ' Season 13
By Brad Witter
Get Even More From Bustle — Sign Up For The Newsletter