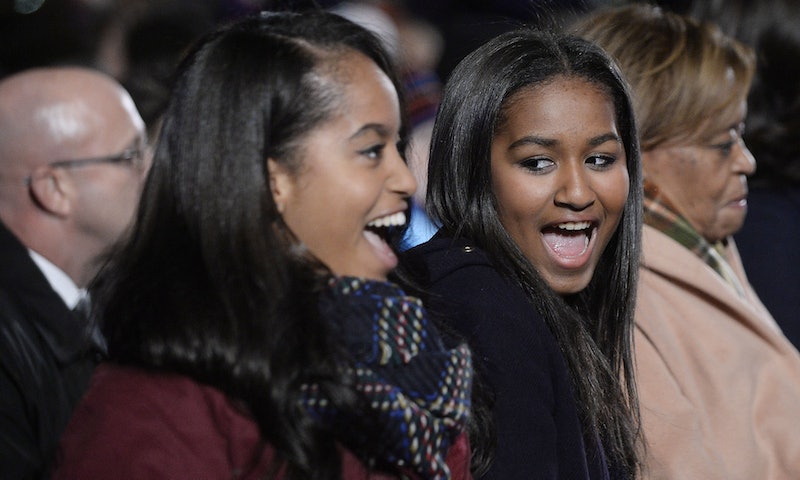 *Sniff sniff* Can you believe it? *Sniffle* Time really flies, doesn't it? Our little girl is all grown up and heading to college. OK, technically, she's Barack and Michelle's little girl, but it's kind of hard not to feel invested. Her dad was President for 8 years, after all. Sasha Obama is attending University of Michigan this fall, The Detroit News reported, and seriously — how wild is that? Seems like only yesterday she was just an adolescent romping around the White House. Ugh, pass the tissues.

While neither the Obamas nor the school have officially that Sasha is enrolled — UM spokesman Rick Fitzgerald told The Detroit News that they "cannot confirm the enrollment of any student" because they are "weeks away from official enrollment information" — several sources for the paper have reportedly spotted the youngest Obama daughter out and about on the UM campus while attending freshman orientation.

"I was walking by, pushing a vacuum, and she walked out right in front of me," Zach Lassen, a student at the university, told the newspaper. "I said, 'Excuse me.' It was a crowded hallway with her and some Secret Service dudes. … It’s pretty cool." Pretty cool, indeed.

According to Us Weekly, Sasha announced that she'd decided on a college via an Instagram post on her private account back in December. "So proud to say I’m going to college with my sisters!" she reportedly captioned a photo of herself and two friends. The Detroit News noted that she also tagged UM in the pic, and it appeared to have been taken on the school's Ann Arbor campus.

It's worth noting that Sasha has seemingly chosen a decidedly different academic path than that of her famous family, by choosing a Big Ten school instead of going Ivy League. Her former President father, Barack, went to Columbia University in New York City for his undergraduate studies. Her mom, Michelle, graduated from Princeton, and her older sister, Malia, is about to begin her third year at Harvard.

"I think it's cool that even though her family went to Ivy League schools, she decided that UM was the caliber high enough to match that of an Ivy League school," a sophomore named Jessica Brinser told The Detroit News of Sasha's decision. "We hope she finds her fit here just like we all have," she added. "We all love it here. We hope she does, too."

Sasha graduated from Sidwell Friends School in Washington, D.C. earlier this year. Her sister, Malia, also went to the school, as did former Vice President Joe Biden's granddaughter Maisy. Sasha and Maisy were actually in the same class, and the Obamas and the Bidens all got together after graduation to celebrate, Washington Post reporter Matt Viser tweeted at the time.

Regardless of whether or not the rumors about Sasha's college choice prove to be true, it's no doubt an incredibly exciting time in her life. Any university would be lucky to have her — she's certainly got a bright future ahead.

More like this
Are John Legend & Kanye West Still Friends? The Singer’s Latest Update Is Candid
By Brad Witter
The 'First Kill' Cast & Fans Are Disappointed Over The Show’s Cancellation
By Brad Witter and Sophia Moore
Christina Aguilera Took A Powerful Stand At Brighton Pride
By Sam Ramsden
'Scream’s Courteney Cox Has Broken A Major Horror Record
By Sophie McEvoy
Get Even More From Bustle — Sign Up For The Newsletter