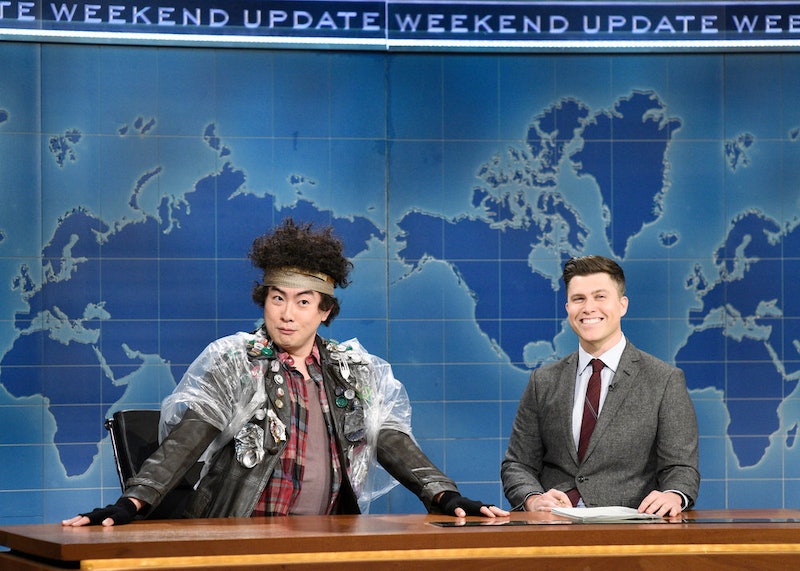 Will Heath/NBC
By Sabienna Bowman
April 9, 2020

They may be locked out of 30 Rock, but the cast of SNL isn't letting that stop them from putting on a show. Saturday Night Live is returning with a quarantine episode on Saturday, April 11 at 11:30 p.m. ET/PT. The long-running sketch comedy series was forced to shutdown production due to the novel coronavirus pandemic (COVID-19) in March, but now NBC has found a way for the show to go on, while still observing social distancing practices. SNL is returning with a host-less remote show, as reported by The Hollywood Reporter, and there are plans to incorporate fan-favorite sketches into the special episode, including "Weekend Update."

The episode will also include material from the rest of the SNL cast, although what that material will be remains to be seen. For their part, the cast seems excited to be creating a fresh episode from their homes. On Thursday, the official SNL Twitter posted a photo of the cast, including Pete Davidson, Kate McKinnon, and Kenan Thompson, prepping for the comedy show's return.

For now, the remote episode is said to be a one-off, according to THR. But given how many late-night shows have embraced filming at home, this new episode could be a preview of what's to come for SNL — at least for now. With the film and television industry essentially shutdown, shows are starting to get creative with their filming and presentation. And given its flexible nature, it only feels right that SNL is giving a remote episode a go, even though it's going to be strange for the cast to not be coming to viewers live from 30 Rock.

Saturday's outing will mark SNL's first new episode since Mar. 8 when Daniel Craig hosted. The next new episode had been set for Mar. 28 with John Krasinski hosting before the pandemic forced the show to take an indefinite hiatus. At the time that filming stopped, SNL had filmed 15 of the 21 episodes in its 45th season.

Now that the show is going on, it looks like SNL will make it to episode 16 — it's just going to be coming to people live from the cast members' homes instead of the familiar sound stage at 30 Rock.