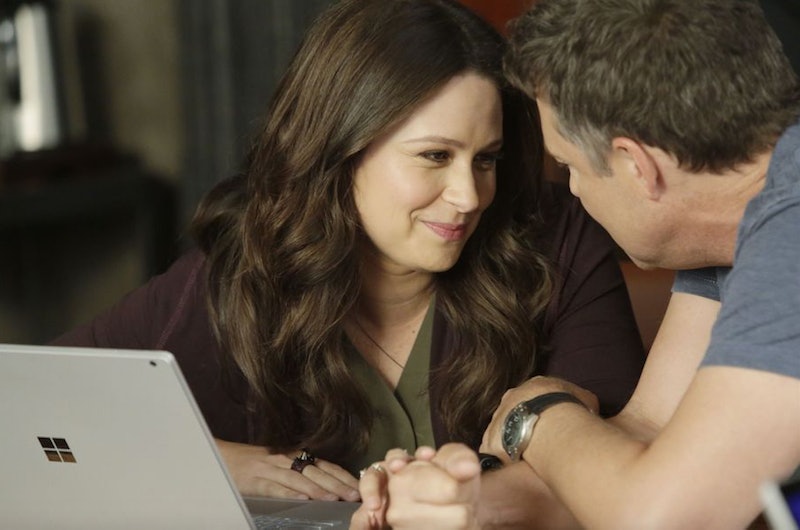 After four insane episodes of Scandal's Season 6, fans are given a bit of a break from the twisty drama until the fifth episodes airs on March 9. Now that I have a second to catch my breath, I need to take a pause and address the big elephant in the room probably weighing on other fans' minds, too. There's been a lot happening — between the assassination and Cyrus' sentence, major stuff has gone down. But I'm still contemplating the age-old question: Will Olivia (Kerry Washington) and Fitz (Tony Goldwyn) rekindle their romance or what? I spoke with George Newbern, who plays new OPA associate and longtime assassin Charlie, to get his input on the scenario and the future of his own character's relationship with Quinn (Katie Lowes). It's looking promising, gladiators.

First thing's first: Quinn and Charlie are maybe, sort of ready to commit. Charlie proposed and after fighting her reluctance, Quinn agreed. Newbern is all for it. "I think they’re a bunch of weirdos and I love them for that, it’s just hilarious," he says on the phone. "I say that lovingly, but they’re all not normal folks." That said, is holy matrimony possible for these two unstable killers? He'll believe it when he sees it.

"I have yet to see if it happens. Maybe it will happen, maybe not," he explains. "I hope so, I guess? But at the same time, I could get shot in the head, so I don’t know," he says with a laugh. A happily ever after would just be too perfect, right? "I think if there’s a dead end here, there’s usually a left turn or a right turn. If we get married, maybe that takes us in a different direction," he says. "But I could see them getting married in their weird way and they would probably have one of the most dysfunctional marriages ever."

Seriously, is anyone on this show able to have one semi-stable, healthy relationship, ever? "It sure doesn’t seem like it, does it?," Newbern says. And it's all intentional, partially to drive fans crazy. "The writers have set them up to be almost super humans, above humans' normal relationships. They get away with acting in a way that most normal people would never be able to recover from," he says. "That’s the world of the writers, excepting things that don’t happen in real life. In Scandal, there’s such a suspension of disbelief that you just go with it. And that’s what make the show fun."

So how does this unpredictable nature apply to Olivia and Fitz? Is that happily ever after a possibility? The actor seems to think so.

"Never give that up," he says. "I think it’s always under the surface and it seems to me that something that big doesn’t get killed." In fact, his own experience in a real-life, back-and-forth relationship with his now-wife allows him to see how they could eventually work it out, regardless of everything that's worked against them. "Sometimes life takes a very curious route," he says. "My wife and I broke up for like two or three years on-and-off, dated other people, and ended up getting back together to get married. I would’ve never seen that coming. Ever."

Just because Fitz and Olivia haven't deemed the other as "the one" doesn't mean they won't eventually. "I think that’s a romantic, silly notion, 'When you know, you know,'" he says. And hasn't the show established that its relationships aren't exactly orthodox?

"It’s all about the timing. Certain things are pulling them apart — but I think they ultimately will end up together," he says. "It’s just how gracefully they can keep everything else going until that time. Because if they get together right away, it’s not that interesting," Newbern explains. He makes a point. But after our chat, Vermont seems a little bit closer — and I'm OK with that.

More like this
Ozzie’s Coming Out Scene With Kitty On 'That ’90s Show' Has Twitter Sobbing
By Brad Witter
Here’s What Happens To Bill & Frank In 'The Last Of Us' Video Game
By Brad Witter
Turns Out George Clooney Is A Huge Fan Of This Classic British Game Show
By El Hunt
'The Last Of Us' Episode Schedule Competes With The Super Bowl & Oscars
By Brad Witter
Get Even More From Bustle — Sign Up For The Newsletter
From hair trends to relationship advice, our daily newsletter has everything you need to sound like a person who’s on TikTok, even if you aren’t.