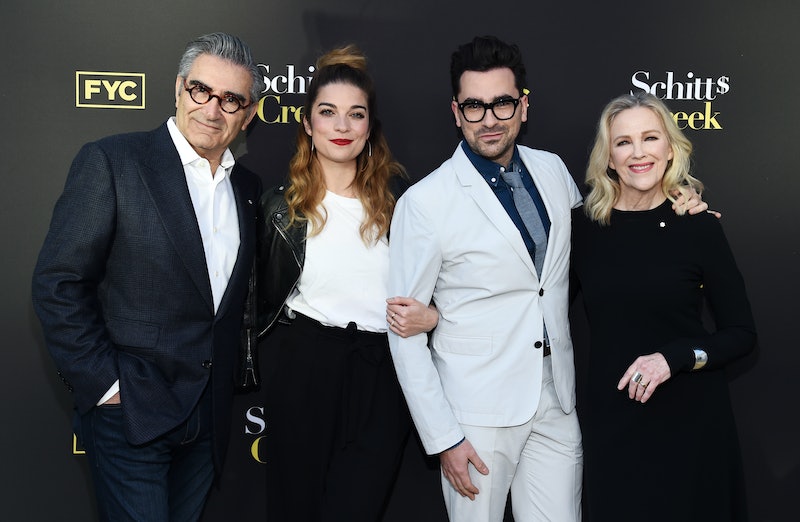 Here's further proof that this comedy is simply the best. During the 2019 Emmy nominations announcement on Tuesday, it was revealed that Schitt's Creek scored four Emmy nominations. It's about time that the show co-created by father and son duo, Eugene and Dan Levy, was finally recognized by the Television Academy for its amazing talent and fantastic storytelling.

As fans can probably imagine, Dan is overjoyed by the Emmy news. He shared on Instagram on July 16,

"COULDN’T BE PROUDER IF I TRIED! 4 F*CKING EMMY NOMINATIONS!!!"

Both are completely appropriate responses. For far too long, the comedy has been overlooked by the Television Academy. Now that Schitt's Creek is ending after Season 6, the show is thankfully racking up some hard-earned Emmy noms.

Like Dan, who also serves as the series' executive producer and writer, fans couldn't be happier for Schitt's Creek's four Emmy nominations. Here are just a few of the many, many tweets fans have shared:

The Happiness Is Real

Everyone needs to watch this show, stat.

Just let Moira do the talking.

Who Else Is Crying?

But, really, the writing is on point.

Schitt's Creek Is All That Matters Now

Some fans will only talk about the nominations until the awards show airs on Sept. 22.

Also, is this a real fan club? Where can fans join?

Kevin McCallister would probably be proud.

The Best Surprise By Far

So Much Yes To This

Who knows if Schitt's Creek will take home any Emmys, but all that matters right now is the series finally earned some much-deserved recognition. Like both Dan and fans, the nominations should be celebrated and maybe even with a song inspired by the Jazzagals.