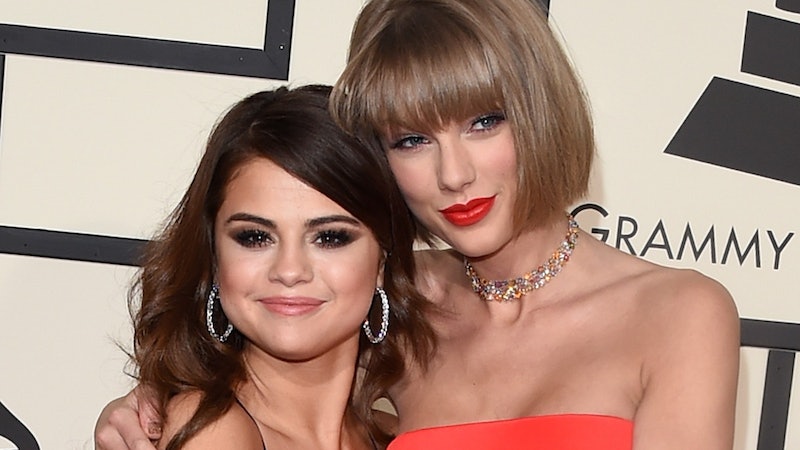 Selena Gomez's fans were thrilled when the singer released her newest single, "Lose You to Love Me" on Oct. 23, and nobody was more excited than her good friend — and biggest fan. In a recent interview with Beats 1 DJ Zane Lowe, Taylor Swift says Selena Gomez's new music reflects her "resilience," before sharing how much she's appreciated being the former Disney star's friendship over the years. "I now see resilience as a major quality of friendship," Swift said, noting that dealing with the fallout from her negative reputation in 2016 taught her who her true friends were.

"When your stock is down, if they're still wanting to hang out, that's [important]," Swift said. "I now know who those people are." When Lowe mentioned that Gomez was one of those people who stood by Swift's side, the singer was overcome with pride. "I'm so proud of her. She's been through so much," Swift said. "I've watched so much happen in her life. She is such a revelation." The Lover singer went on to explain that she loves Gomez's new music so much because she's seen the struggles that her friend endured to reach a place of healing and catharsis.

"She is making her best stuff [right now]," Swift said. "I'm really excited because when somebody has had great life experience, has had really tough things they've had to go through, and they can process that and make art that's going to help other people ... that's what kind of song this is." Swift also went on to declare "Lose You to Love Me" to be "the best thing [Gomez] has ever done," which might officially make her the biggest Selenator of all.

This is not the first time that Swift has shared her love of Gomez's new music; shortly after "Lose You to Love Me" was released, Swift gushed that the single was "a triumph" in a proud Instagram Story. "This song is a perfect expression of healing and my absolute favorite song she's put out yet," Swift wrote.

In a press release obtained by Bustle, Gomez wrote that "Lose You to Love Me" was inspired by many things that have happened" in her life — including undergoing a kidney transplant due to complications from Lupus, checking into a mental health facility for treatment and a brief reconciliation with her ex, Justin Bieber — since releasing Revival in 2015, and that she wanted the song to inspire hope in her fans. "I know many can relate to the fact that the road to self-discovery generally comes through the scars in one’s life," she said. "I want people to feel hope and to know you will come out the other side stronger and a better version of yourself."

In her own interview with Lowe, Gomez praised Swift for sticking by her side through the ups and downs of the past few years. Describing Swift as an "amazing friend," Gomez revealed that the singer had been "sad when I was sad," in order to show her support. "But more than anything, my friends stood by my side. I think they visibly saw me in so much pain," she recalled, getting choked up. "And they didn’t want it for me but they never stopped loving me."

Gomez also recalled playing "Lose You to Love Me" for Swift long before she decided to release it as a single, and revealed that Swift and her mother, Andrea, "started crying" when they first saw the music video. "It wasn’t because the song was emotional. It was just because the first thing they said to me was, ‘We’re so happy that you’re here. After seeing all of that, this is such a cool moment.’ And that’s a huge thing for me."

Based on both of their comments, it's clear that Gomez and Swift's friendship is something they value greatly. And after seeing everything that Gomez has been through in the past few years, it's no wonder that Swift has been so proud to see her good friend happy, healthy and succeeding once again.