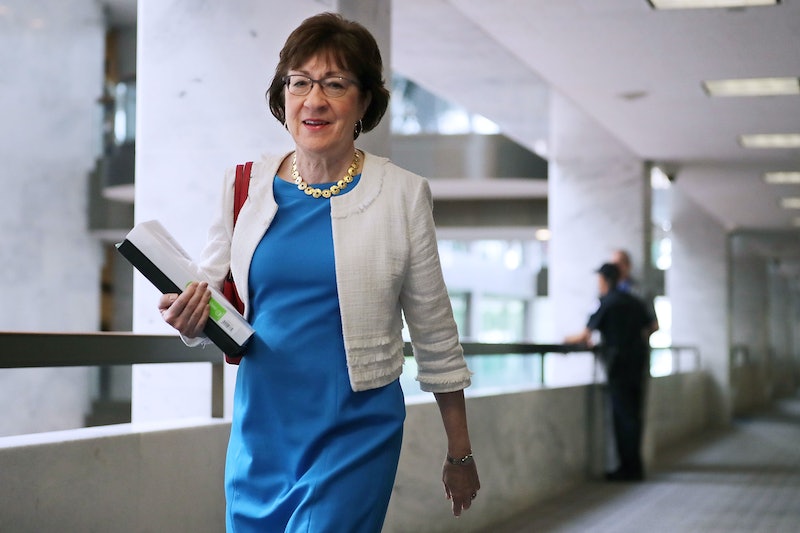 Sen. Susan Collins received an "extraordinary" welcome as she returned to her home state of Maine last week after voting "no" on the Senate GOP's attempt to repeal and replace the Affordable Care Act. Collins was reportedly applauded for voting against the skinny repeal. She wasn't the only Republican senator to break with the GOP in last week's vote, but for her constituents, she clearly earned the praise.

"I got off the plane and there was a large group of outbound passengers — none of whom I happened to know — and spontaneously, some of them started applauding," Collins said when asked about the episode by CNN's Jake Tapper on Sunday. "It was just amazing. I've never had that happen in the 20 years that I've been privileged to serve in the Senate."

Collins also told CNN that Vice President Mike Pence spoke to her on the floor of the Senate. "Boy, you are tough," Pence reportedly told Collins during the late-night vote. Pence was on standby for Friday's vote, as he voted on Tuesday to break a 50-50 tie in order for Republicans to open the health care issue up for debate.

It's unclear where the GOP will turn next in its ongoing attempts to repeal and replace Obamacare. If Collins has anything to say about it, though, she'd reportedly like to see the health care issue "go back to committee" for bipartisan consideration. Her comments on CNN on Sunday echoed McCain's sentiment last week on the floor of the Senate. After voting with Republicans in Tuesday's procedural vote, McCain called for a return to the old-fashioned form of legislating, with committees and debate, rather than closed-door meetings that shut out the majority of voices.

"We need to reconsider our approach," Collins said in a statement upon casting her vote agains the so-called skinny repeal last week. "Neither party has a monopoly on good ideas, and we must work together to put together a bipartisan bill that fixes the flaws in the ACA and works for all Americans." Regardless of what happens next with health care, that sentiment — and the vote she cast against her party — ultimately earned Collins the applause of her constituents.