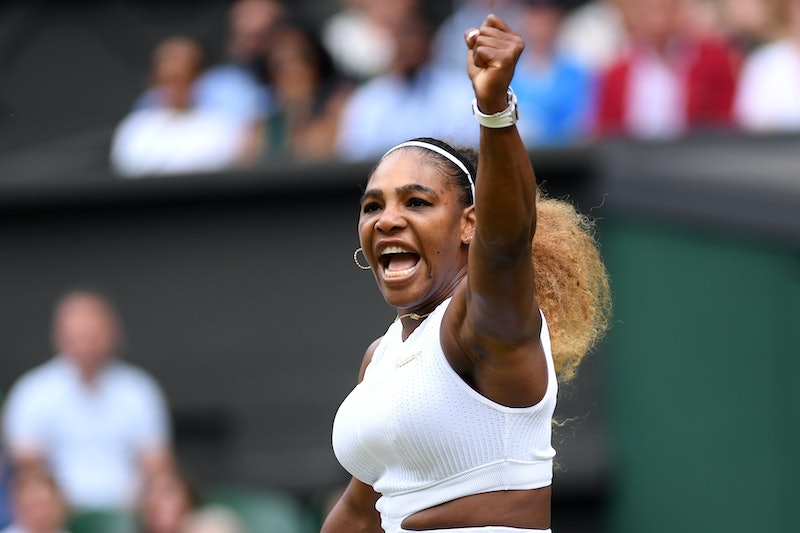 Match point. She may have finished as a Wimbledon 2019 runner-up, but Serena Williams' epic press conference comment on equality showed she's a true GOAT. Following Williams' ladies’ singles championship loss to Romanian Simona Halep on July 13, a reporter referenced Billie Jean King and asked Williams to address critics who believe she "should stop being a celebrity for a year and stop fighting for equality and just focus on tennis."

Williams' Grand Slam-worthy response? "Well, the day I stop fighting for equality and for people who look like you and me will be the day I'm in my grave," she lobbed back. Mic drop.

According to Sports Illustrated, fellow tennis legend King told the BBC earlier this month that if Williams wishes to surpass Margaret Court's record 24 Grand Slam titles, she should give up being a celebrity for a year and "just stop all this insanity." (Williams currently holds 23 Grand Slam singles titles and 39 Grand Slam titles overall.)

It doesn't appear that King ever intended to convey a wish for Williams to stop fighting for equality, however. She simply noted that Williams has a lot of peripheral projects, such as her Serena Ventures investment firm, a clothing line, and ownership stakes in the Miami Dolphins and UFC.

In another pre-Wimbledon interview with CNN, she noted that Williams — who, along with her sister Venus, serves on the Billie Jean King Leadership Initiative advisory board — should only shift her focus if that's her current priority. King elaborated:

"I think if she wants to win — and that's up to her, she's got to be happy — I would say to everybody: 'You guys, I'm going to focus for the next year-and-a-half, two years, I'm going to break these records, but I have to get single minded, I have to get totally fit.' And at her age it's much tougher, you've got to be smarter, you've got to get your nutrition right, you have to work harder. But it's worth it if you want it. But if she doesn't want it, it's fine."

While nobody can ever legitimately question her drive or winning spirit, what Williams undeniably does want is to stay true to herself. After all, standing up for her beliefs has long been a cornerstone for what makes the tennis pro, a true champion — on and off the court.

"Ever since I was a little girl, I’ve felt a need to voice my opinion and be heard," she wrote in a 2018 Harper's Bazaar cover story. "Some may not like it, and to be honest, that’s their prerogative. I respect it. Growing up as the youngest of five girls, I learned that I had to fight for everything I wanted. And I won’t ever stop raising my voice against injustice."

As of late, the injustices she's put a spotlight on have included everything from unequal pay and blatant sexism in sports. As a result of her activism, Williams said she's been booed, shamed, penalized, and "called every name in the book." But she continues to fight anyway.

"In short, it’s never been easy," she also shared in the Harper's Bazaar essay. "But then I think of the next girl who is going to come along who looks like me, and I hope, “Maybe, just maybe, my voice will help her.”

Plus, she now has a daughter of her own, 22-month-old Alexis Olympia (with husband Alexis Ohanian), to think about, too. As Williams concluded the article:

"Ultimately, my daughter is the reason I use my voice, the reason I picked up a racket again. Love breathes life and newfound perspective into people. It’s not about quitting when someone presents a challenge; it’s about getting up when you are down, dusting yourself off and asking, 'Is that the best you got?' Because I have God with me, and I can take whatever comes my way."

Adversity has clearly never been a worthy opponent for Williams.

More like this
Miss Thailand's Soda Tab Gown At The Miss Universe Pageant Had A Special Meaning
By Brad Witter
Twitter Is Identifying With Sally Field & Jane Fonda’s Friendship In New Viral Video
By Jake Viswanath
David Beckham’s Controversial Qatar Deal Skyrocketed His Net Worth
By Catharina Cheung
'Breaking Bad' Duo Walt & Jesse Are Back — In This Super Bowl Commercial
By Jake Viswanath
Get Even More From Bustle — Sign Up For The Newsletter
From hair trends to relationship advice, our daily newsletter has everything you need to sound like a person who’s on TikTok, even if you aren’t.