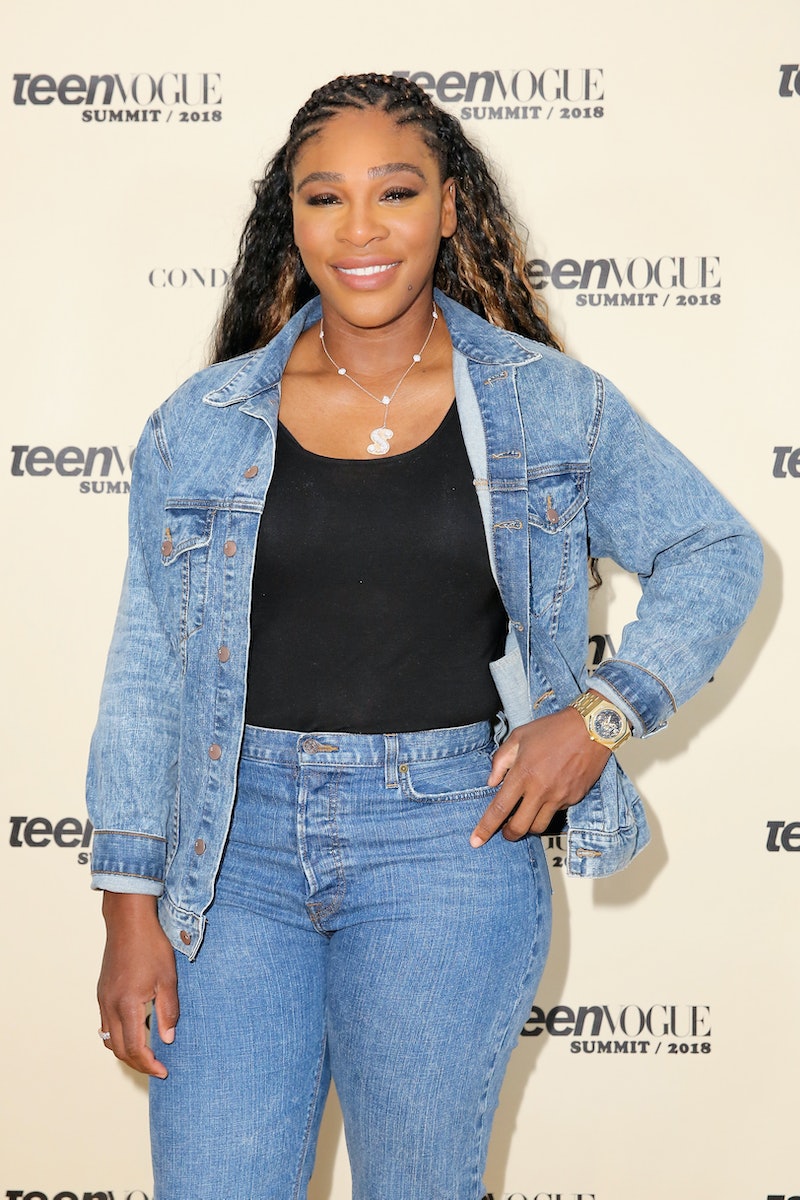 This mother-daughter duo are ready for Wimbledon 2019. In a new Instagram shared by the tennis star, Serena Williams and Olympia are twinning once again. Williams, who is gearing up for her first match on July 2 at the tournament held in London, England, shared the photo with her 1-year-old on Monday.

As you can see below, Williams and Olympia wore matching sweaters with the letter "S" on the front, which of course stands for "Serena." The single letter is also the logo of Williams' clothing company, Serena. As for the green and purple, the hues represent the colors of the Wimbledon logo. The official Serena website asks customers to "wear [the sweater] to rep Serena in London, and beyond."

Williams wrote next to the sweet photo with Olympia, "Let the games begin!" They also hit the same pose and smiled from ear to ear. See? Twins.

On June 27, Williams shared an Instagram of the sweater that amazingly champions the 23-grand slam singles title holder. She captioned the image,

"Came to conquer. [crown emoji] Wear our S on your chest with the limited edition London ‘S’ Sweater. Head to @serena to grab yours just in time for Wimbledon and show your support! #BeSeenBeHeard #weshipworldwide"

This isn't the first time Williams and Olympia have been twins. In September 2018, the 37-year-old tweeted a picture of her daughter wearing a black tutu. She captioned the post of Olympia holding onto a pink stroller, "Did Momma win?" For those who may recall, the photo was shared after Williams advanced to the 2018 U.S. Open Finals. Unfortunately, Naomi Osaka beat Williams in the final match.

As for Olympia's mini-tutu, Williams wore a similar black tutu outfit during one of her 2018 U.S. Open matches. The tutu is also part of Williams' Nike collection of athleisure, Serena Williams x Virgil Abloh x Nike.

Their twinning game continued on April 9 when Williams and Olympia wore matching poodle skirts in an a photo the athlete shared on Instagram. "Pink things," the images' caption read. In addition to their pink poodle skirts, they both had similar white shirts on with poodle graphics, pink scarves around their necks, and what appeared to be the same white tennis shoes. If that isn't enough, Olympia also carried a pink umbrella. They are truly one adorable mother-daughter duo.

There's no denying Williams loves her little girl with every fiber of her being. She's also previously opened up about how much Olympia takes after her. In May 2018, a fan tweeted the tennis champion, "What’s one habit Olympia takes after you?" Williams replied by writing, "She never quits. And I mean NEVER quits. I love it." And that was only eight months after Olympia was born.

One can only imagine the amazing person Olympia will turn into one day. With Williams as her mother and Alexis Ohanian Jr. as her father, there's no doubt she'll continue to grow into a memorable individual, who does so much more than simply twin with her mom. With that, let's hope this isn't the last time Williams and Olympia share their mother-daughter fierceness on social media.