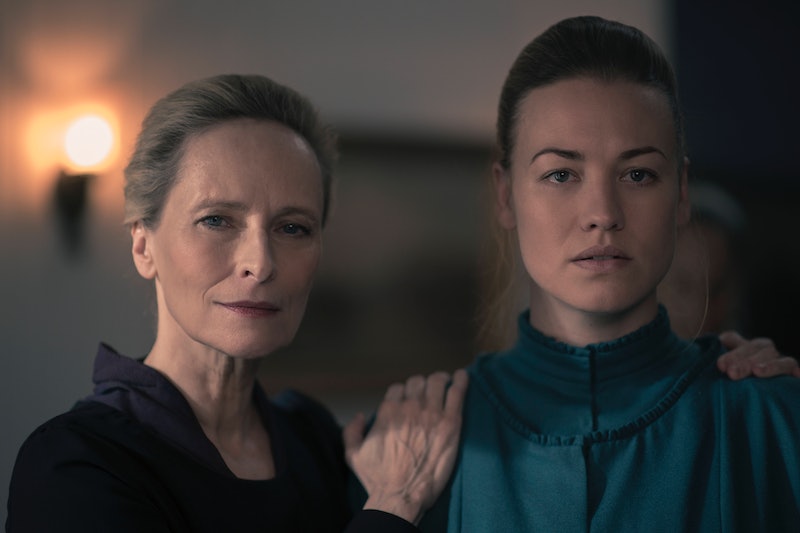 After burning down the Waterford house, easily the most rebellious thing she's ever done, Serena Joy goes to stay with her mother on the coast of New England. She wants to stay there, and leave Fred, after everything horrible that they've done as Gilead leaders. Her mother doesn't want details, and Serena lashes out at her choice to remain ignorant.

"That's because none of it matters," her mother says. "Look at you. All the gifts you've been given. But you need everything to be exactly how you want it. Spoiled little girl. You know there's no place in this world for you without Fred."

Ironic, isn't it, since the "domestic feminism" text Serena published was titled A Woman's Place? As much Serena initially was complicit in Gilead's enforced gender roles, she's stuck with them now. Her mother is right. Serena Joy is trapped, whether she likes it or not. Even if divorce was an option, she'd have to become a Martha, or an Aunt, or worse. She can't just walk out on Fred.

"Enough drama," her mother continues. "It's the worst thing in the world to watch a child in pain. It's the worst pain any mother could bare." Not only does the manipulation sting but Serena has been in more profound pain, as a mother separated from her child. Between that fight, and the way her mother's prayer circle called her weak, Serena is drifting further and further from the dystopian society she helped to create. She's disillusioned.

Later in the episode, Serena goes to visit June at Commander Lawrence's house. "You're scared," says June. "Use it. Maybe we're stronger than we think we are." While Serena says she's no longer interested in the rebellion, there's no way she would be in that parlor if she wasn't looking for a push from June. She finally understands how June feels about having Hannah taken from her. It's a turning point in their relationship. If Serena can't get the support she wants from her mother, or from Fred for that matter, June may be her only option — and her only true friend.

It's going to take more than impulsively burning down your marriage bed for Serena to truly make a change, and redeem herself for her role in how Gilead has oppressed women. She's got to find a new place in the world, and hopefully make a difference.