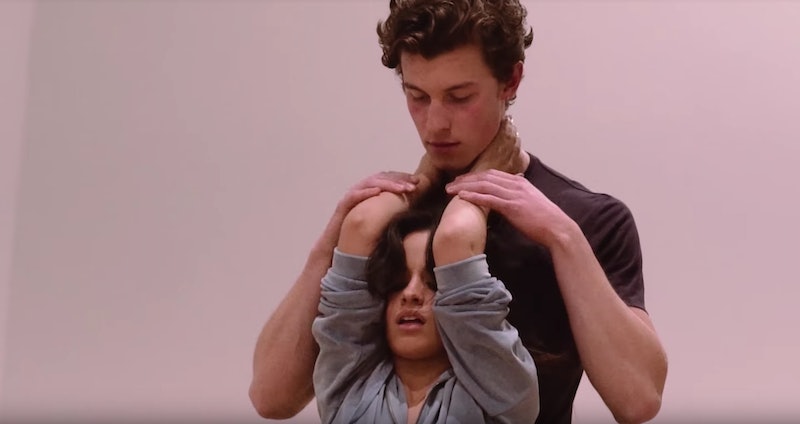 There were plenty of steamy and sensual dance moves on display in the "Señorita" music video, but it took a lot of rehearsal and even a spill or two to make sure that the clip's stars were ready to tango. In a new behind the scenes look at his music video, Shawn Mendes revealed making the "Señorita" video with Camila Cabello helped overcome his fear of dance thanks to his friendship with the "Havana" singer.

In the clip — which Mendes released on Monday, June 24 — the longtime friends let fans in on the rehearsal process, showing all of the hard work that went into mastering the sultry dance moves that were the centerpiece of the music video. "This is my worst nightmare, having to dance," Mendes told the camera on the first day of rehearsals.

And it's not shocking that Mendes was worried, as he accidentally dropped Cabello while the pair worked on one of the dips featured in the video. "Did you get that?" a laughing Cabello asked after getting up off the floor, while Mendes joked that his career would be over if he didn't learn to master the dance moves. "You can’t just drop Camila Cabello, you can’t do that," he says with a grin — after making sure that Cabello was okay, of course. "I can’t do that again or it’s over for me."

But once Mendes gets all of his steps down it's time for the singer to face his biggest fear: filming the choreography for the video. "We have a lot of stuff to shoot today, man," he says, while getting his hair and makeup done for the first day of filming. "I feel nervous to do this dance. The first scene is the dance scene, which is the thing I’m most nervous about, but maybe that’s good?"

Thankfully, it seems as if filming with his good friend helped ease his nerves, as Mendes appeared suave and confident while filming the steamy scenes — although, he and Cabello kept cracking each other up in between takes. The pair recently reflected on their friendship in a conversation with V Magazine, where Mendes admitted that he was a little overwhelmed by Cabello when they first met on tour with Austin Mahone back in 2014.

"I also thought you were crazy. Insane." the "Treat You Better" singer confessed. "I thought you were out of your mind. I’d be in my bus where no one could see me. I’d be looking through the window and I’d see you like, flying around on a scooter and jumping and doing cartwheels."

Shortly after the "Señorita" music video was released on Friday, Cabello gushed about how much her friendship with Mendes meant to her in a post on Instagram, where she shared several goofy photos from behind the scenes. "Just wanna say thank you to all these talented, passionate, relentlessly hard working people who make this happen!!!!" Cabello wrote, before addressing Mendes specifically to reflect on their half-decade long relationship. "You’ve been in my life for 5 years now and it’s a hell of a ride growing up together."

She continued, "Thank you for always being being there for me and having my back, and also for saying funny sh*t during takes so it was impossible not to laugh. 😂 everybody on here that loves you would only love you more if they really knew you."

While it might have been incredibly intimidating for Mendes to have to face his fears of learning to dance for a music video, it's clear that having Cabello with him on set and in the rehearsal room made things a little bit easier, and a lot goofier.